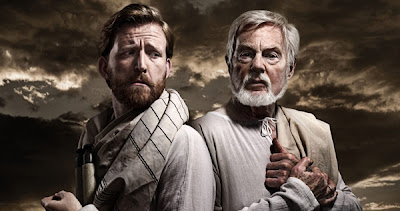 For fuller details of the plot, see the TV reviews.

We pick up where we left off, with Caligula's continued descent into madness. The obsessive compulsive in me still really wishes the beginning and ends of reigns would come at the beginning and ends of episodes, though I can see why, with six episodes and four emperors, that could be quite impractical. Also, I presume that scenes and incidents were selected for inclusion according to their importance, rather than the episode schedule, and there would be almost no way to rearrange the material here so that reigns ended with episodes without losing half the series.

As with a number of outdoor scenes or crowd scenes, Caligula's attack on Neptune works rather well on radio, Claudius' narration and the sounds of splashing and soldiers starting to giggle providing an effective mental image of the ludicrous sight. Unfortunately, with the memory of the TV version strong, the scene of Caligula's dancing performance to a terrified Claudius and two fellow ex-consuls is not nearly as effective on radio, though Samuel Barnett's singing voice is good. The problem is that you just can't match John Hurt's fabulous expression and rather memorable costume from that scene in the TV series when you've only got voice to work with. It couldn't be left out, though, since this scene is also Claudius' introduction to Messalina - to poor Calpurnia's distinct chagrin.

Interestingly, it is Caligula's dangerousness, and his increasing tendency to execute people on the flimsiest of pretences that is really emphasised as the reason for his assassination here. The scenes leading up to the assassination in the TV series focus on the more absurd elements of his madness - the dance and the silly passwords he gave to Cassius to humiliate him. Here, however, it is the danger of his madness that, it is implied, leads to his assassination, making the assassins look rather more noble and wise and rather less cruel. Particularly effective is the very fast-paced scene in which Caligula nearly has Claudius executed for having too much hair, but Claudius convinces him that he said he wanted his hair chopped off, not his head. Barnett's delivery is perfect, escalating in tone, pitch and speed as he becomes genuinely confused.

Cassius' motivation, however, is still directly stated to be his humiliation at the passwords and nicknames, making him, as in previous adaptations, seem especially harsh. Claudius, meanwhile, feels extremely sorry for himself, both for having been left out of the plot and for having been on the death list as well (his tone sounds a bit like Cicero's letters to the conspirators against Julius Caesar, in which he whinges repeatedly that he wishes they'd invited him to the great feast on the Ides of March - though Cicero's main gripe was that he would have killed Antony too, and Claudius would hardly have suggested killing himself!).

Caligula's death itself is over rather quickly, and he cries out nothing but 'save me!', making him seem both more and less pathetic than if he were to cry out 'You can't kill me, I'm a god!'. Claudius' discovery in his hiding place is rather nicely done - it's hard to tell from the voices, but I think the implication is that the same soldier Claudius had earlier warned of Caligula's intention to decimate the army discovers him and recognises him as Germanicus' brother. Messalina's presence is also effective, providing a clear reason for Claudius' accepting the rule of emperor, though he still needs to be talked into it by Herod Agrippa as well. Best of all, though, is his sudden realisation that, as emperor, he could make everyone read his books - simultaneously very funny, exactly what all of us struggling writers would do given the chance, and a subtle foreshadowing of Nero's later use of the imperial rule to advance his theatrical career. It was with this rather touching bit of humour that Graves finished the novel - the rest of the series is drawn from the sequel, Claudius the God, which dealt with Claudius' own reign.

The process of Claudius' confirmation as emperor is, however, quite drawn out and we hear a lot of the Senate's wrangling and arguing on the subject. In fact, a full quarter of the episode is concerned with the fall-out from the assassination - Claudius' confirmation as emperor and his dealing with the conspirators. Towards the end of the episode, we see the beginning of Claudius' own reign and the way he leans on Messalina, though he does observe that he doesn't actually want her to be 'his Livia'.

What I was really surprised to find missing from all this was Claudius' speech to the Senate, in which he convinces them that he is not an idiot, observing that what a man says is more important than how long he takes to say it. I was so surprised, I went back to see if I'd missed it while looking at something else, and I still have a nagging feeling that might be the case. It's a very long time since I read Claudius the God, so I can't remember whether this speech appears in the book, or whether it was written for the TV series - obviously, if it was written for the TV, that explains its absence here. You do feel it though, since now there is no opportunity for Claudius to really sell himself to the Senate as emperor.

Claudius' arguments in favour of Livia's deification, to fulfil his promise, are rather nice and the episode ends with the parting of Herod and Claudius, both amusingly drunk, but Herod giving Claudius the very serious and important advice that he should trust no one - though here, he ends by saying 'forget I said it, I'm drunk'. Claudius ponders it though, and that's where the episode ends - with Claudius on the verge of being betrayed by both Herod and Messalina in the next episode.

This is an effective ending-point for the episode, setting up betrayal as what will presumably be a major theme of the next and final episode. I missed some of the particularly effective lines from the dying Caligula and new emperor Claudius from the TV in this episode (a wholly unfair criticism of an entirely separate series, but I can't help it), but Caligula's escalating madness was very effectively portrayed, particularly through his increasingly fast and high pitched delivery. Messalina, so far, is completely sensible-sounding (and doesn't have the soft, little-girl's voice she was given on the TV - she sounds much like the other women in the show) and there is 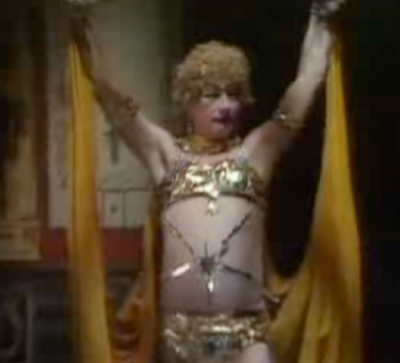 no hint of the craziness to come apart from Herod's drunken warning, which really applies more to himself than anyone else (the implication being that he is already contemplating rebellion). I would imagine the final episode will be another episode in two clear halves, one half Messalina and the other Agrippinilla and Nero, and it will be interesting to see how the radio (at 3 o'clock in the afternoon, we should remember) will deal with some of Messalina's activites, if at all...