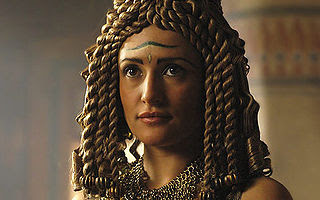 An exciting and long-awaited episode, this one - the introduction of Cleopatra!

Brutus returns home to mummy, and is sad. Sad violin music plays in the background, he looks sad, she looks sad - they are sad. Given that he's unexpectedly still alive after a major battle, you'd think Servilia would be more pleased to see him. Judging by the look on his face, Brutus thinks so too.

Caesar has chased the already-dead Pompey to Egypt - and yay, there's a camel! Um, actually I don't think there should be a camel, as I have a vague notion that the Romans were the ones who brought camels to Egypt from Arabia. Wikipedia, however, disagrees, so maybe no one really knows. Anyway, it's a cute camel.

We meet Ptolemy first, a sulky child in Queen Amidala make-up, a little reminiscent of I, Claudius' Tiberius Gemellus (and just as doomed). Caesar is not impressed at being insulted by a child or at being presented with Pompey's head, since neither it nor his body have been treated with the respect due to a Roman consul. I've always harboured a suspicion that Caesar was secretly pleased at Pompey's execution and putting on a show, but actually, in this version, he comes across and genuinely - and sensibly - outraged, because the insult is to Rome and because while he may have wanted Pompey dead, this is not way he wanted to go about it.

Caesar sends Mark Antony packing back to Rome, Ptolemy to bed without supper and sets off to find Cleopatra, because her dispute with Ptolemy is blocking payment of money they owe him. Ptolemy sends assassins to get rid of Cleopatra himself but, of course, like every other significant character in ancient Rome, they ride straight past Boring and Dodgey, who ride off after them. The assassins make the classic movie-bad-guy mistake of giving their victim a chance to say some last words, and lo and behold, Boring and Dodgey leap in (to the Queen's bedchamber - they're lucky those actually were assassins) and save the day. Dodgey, foreshadowing the general dodginess that is to come, gets a bit too enthusaistic about the stabbing part.

And so we meet Cleopatra herself, a beautiful, young, apparently permanently drugged-up woman with a nice line in wigs and a somewhat creepy older female slave who is with her at all times. Here's the really interesting thing about Cleopatra. She's regarded as the most beautiful woman in the world, she's been played by Elizabeth Taylor and Amanda Barrie, even Livia in I, 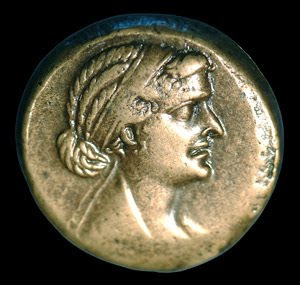 Claudius suggested that Cleopatra was as beautiful as she was when they were young. But have you ever actually seen an image of her? The woman was ugly as sin! This formed part of an important sub-plot in the Roman Mysteries novel The Beggar of Volubilis, which included a handy drawing of a coin of Cleopatra and made quite a point of undercutting her legendary beauty.

Cleopatra VII. Perhaps it was just a really bad coin-maker - after all, no one really looks good on those things...
Presumably, the idea that Cleopatra was extraordinarily beautiful springs from her ability to twist Roman leaders around her little finger and have wild, passionate affairs with them, producing children with both Caesar and Mark Antony. She obviously had some quality that encouraged them to enjoy more than a political alliance with her. Here, she writhes around suggestively on her couch even when no men are present, is always smoking something that can't possibly be tobacco and acts as quite the sexual predator, her slave declaring that she is an excellent lover. Both she and the slave have a slightly odd, short and stilted way of talking which may be supposed to reflect their imperfect Latin or, given that they sound pretty strange when alone together as well, may be the drugs. Bascially, the series, along with just about every other fictional representation of Cleopatra, goes all out on the sex, drugs and rock and roll here, with the excuse of her obvious sexual relationships with Caesar and Antony and her foreign exoticness. This is precisely the image of Cleopatra that Octavian and Livia promoted when they came to power - how far it is true is anyone's guess, though the offspring indicate at least some of it may be reasonable.

Another extra idea that is becoming more popular - it appeared in Alan Massie's Caesar as well - is that Caesarion, Caesar and Cleopatra's son, was not actually Caesar's. This idea springs from three things - the fact that, unlike Mark Antony, Caesar had only one legitimate child, so may not have been that fertile, the idea that Cleopatra used sex to get her way with everyone (maybe she had a killer body) and the simple desire to inject even more naughty sex into a portion of the story already filled with it. So, here, Cleopatra shows her superiority to several ancient Roman medical writers by knowing at what part of her cycle she is most likely to conceive and, since Caesar is not yet around, orders Boring to have sex with her. He, of course, is too noble and refuses (with a very correctly Roman insistence that he will not obey a woman), so Dodgey steps into the breach.

Having arrived in the city, Caesar and Cleopatra finally meet, in a rather clever subversion of the old Cleopatra-rolled-up-in-a-carpet entrance - still in danger from Ptolemy's men, Boring and Dodgey smuggle Cleo and her slave in with them on their horses, Cleo wrapped up in a sack to hide her. The sack is not remotely sexy, but as she sits up and composes herself, even without wig or fancy clothing, she looks impressively sexy and Caesar is clearly instantly smitten.

Backed up by Caesar, Cleo (all got up in royal outfit now) confronts Ptolemy and his eunuch advisors, who are summarily dispatched. Cleo demonstrates that she can be politically savvy when not wreathed in smoke and seduces Caesar in a combination of flirting, political alliance and tempting him with the idea of a son, and with it, a future (something Caesar has not given much thought to, he tends to be mostly interested in his own lifetime).

Oh, and back in Rome, Servilia and Octavia have a shag as well. Just when we'd quite happily put that particular sub-plot out of our minds. In case anyone's wondering, Cleo and Dodgey had wild animal sex, Cleo and Caesar have passionate sex, and Octavia and Servilia have tender sex. Cleo and Dodgey looked like they were having the most fun.

Suddenly, with something of an abrupt change in mood, we are back in an empty Senate with Cicero and Brutus, both at a bit of a loose end. Brutus declares he is done with politics, but Cicero is still itching and considering communicating with Cato - but they are interrupted by Mark Antony (who appears to be wearing a carpet. Clearly he is where the Planet of the Space Romans aliens got the idea from). Mark Antony punishes Cicero for contemplating treachery by grabbing his hands and bruising them like a woman in labour grabbing at her partner, which is nicely threatening and explains the depth of Cicero's later antaognism towards Mark Antony (not that that stopped him finally dying because he'd followed Antony over Octavian. The man changed sides more often than he changed his sandals).

Caesar defeats Ptolemy and, presumably some time later, displays the newborn Caesarion to his troops, who cheer enthusaistically. Except, of course, Boring, who just gives Dodgey a Look.

This is a cracking episode, which really benefits from focussing tightly on a few characters (and it helps that they're among the most interesting characters in the series). The sets and locations standing in for ancient Egypt make a nice change from the streets of Rome and the whole thing hangs together so well that the cuts back to Rome near the end feel jarring and out of place, important as the scene in the Senate is. Lyndsey Marshal delivers a wonderful performance as the Cleopatra of the pop cultural imagination, all oozing sex (even when wearing minimal make-up and no wig) and seductiveness, but with an equally strong political instinct and a will to survive no matter what. I think presenting Cleo without her legendary beauty would not go down well with a modern audience, and that beauty is needed to demonstrate, in a short period of time and in a visual way, how she is able to conquer Caesar (and, later, Mark Antony) so completely. Dodgey as the father of Caesarion is unnecessary but has the virtue of being fairly amusing and he and Boring fit in quite well here, Dodgey's cheerfulness especially providing light 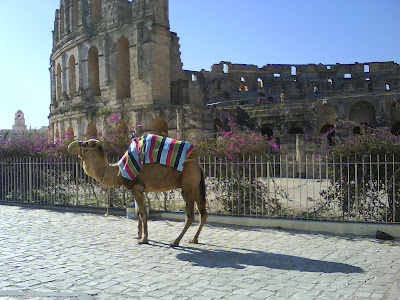 relief from the tense atmosphere in Egypt and the depressed atmosphere among the ex-Pompeians back in Rome. Next week, we return to Roman Eastenders and the death of Cato, which is sadly lacking in giant killer snakes - pity.

A camel outside the Roman amphitheatre at El Jem, in Tunisia - however and whenever camels returned to North Africa, they were certainly all over the Sahara by the height of the Roman Empire.
Roman history Rome TV