The West Wing: In Excelsis Deo 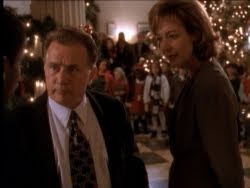 My review of the last episode of Radio 4's I, Claudius will be coming up ASAP, but since we're still in the festive season, so I thought one more Christmassy post might be nice before we all come back to reality.

The West Wing was always really good at Christmas episodes ('Noel' and 'Bartlett for America' are two of the show's best hours all together) and the first, 'In Excelsis Deo', set the bar pretty high. The title's Latin, of course, but that's not what I want to talk about today (it's part of the angels' exhultation when they tell the shepherds about the baby Jesus, 'Glory to God in the highest' and is also part of the Catholic mass, and is, presumably, a reference to Bartlett's Catholicism and to the fact that this is the Christmas episode). The main plot of the episode revolves around Toby arranging a military funeral for a homeless veteran of Korea but the main Classical reference appears in a tiny sub-plot about Bartlett going Christmas shopping in a rare bookshop (a shop for rare books that is, not a cynical comment about the future of the publishing industry).

The bookshop is full of very obscure books, mostly published in the nineteenth and early twentieth centuries, that go into enormous amounts of detail on very specialist subjects. Josh finds one on bear hunting, and buys Donna a book on Alpine skiing for Christmas, in lieu of actual ski equipment (he leaves a very mushy message in it that, wisely, is not revealed to the audience). While there is clearly a decent range of subject material, Bartlett has eyes only for the Classical translations.

Personally, I love nineteenth century leather bound translations of Classical texts - I genuinely love books, the older the better (you can't beat that smell!) and I think nineteenth century translations (which often leave out the naughty bits, among other things) are fascinating. However, it seems that not eveyone shares this love. Bartlett doesn't help matters by choosing the most obscure Classical authors he can find - Phaedrus is really obscure. I suppose it depends what courses you take, but I'm pretty sure none of my undergraduates will have read him. Lucretius is considerably less obscure - so Bartlett gives him his full name, Titus Lucretius Carus, which has the effect of confusing the viewer and making him sound more obscure than he really is, as his full name is considerably less familiar. The writers are clearly going for the most unknown and odd-sounding authors they can think of.

The point of all this is to make Bartlett's idea of a good Christmas present sound as awful and boring as possible (though in that case, I think the details of Phaedrus' background as a slave work against this, as it's really interesting - but perhaps that's just me). Bartlett has made the same mistake as so many well-meaning gift givers over the years - he's buying presents that he would really like to receive, not what the actual recipient wants. His emphasis on the iambic pentameter in Phaedrus' fables once again alienates anyone in the audience without a deep interest in formal poetry and makes the whole thing sound like a school lesson.

It's a bit frsutrating to see Classics being used, once again, as a symbol of the most boring things anyone can think of. But there's the usual balance to be struck of course. It makes me sad that 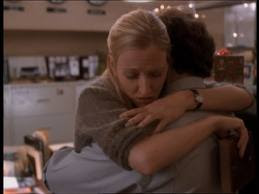 other people find Phaedrus so boring, but on the other hand, even I would prefer a new stereo to a nineteenth century translation of Lucretius or Phaedrus, or any of them. I'd appreciate the Lucretius very much, but if it's a choice between the two, the stereo would win every time. I love Classics, I love books, but let's face it, I'd get more use out of the stereo. Even better, an Xbox. Or a new digital camera. Or a Blackberry...