The Roman Mysteries: The Man from Pomegranate Street 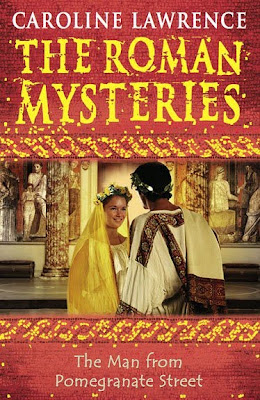 The Man from Pomegranate Street is the culmination of the Roman Mysteries series, offering a balanced combination of closure and threads left open for future projects. Tomorrow, Pop Classics will be posting an interview with author Caroline Lawrence in which she talks about what inspired her to write the series and about future possibilities for Flavia and friends. Today, I'm reviewing this final volume, and beware, here there be spoilers.

For anyone with any knowledge of Roman history - and, of course, the assumption is that most readers have none - this final volume ties up the loose ends and flapping questions. The most important historical event is, of course, the death of Titus, which forms the central mystery of the story. Although it's a shame to miss seeing Titus in the flesh again, his death is handled beautifully - which is to say, creepily and in a rather sinister fashion, as befits a sudden and mysterious death. The question of whether or not he was poisoned, and if so, by whom, is never definitively solved and the possibilities are both shocking and convincing (I'm must admit, I'm glad Dr Mordecai didn't turn out to be a murderer after all!). What I liked best was that the murderer, if there was one, was not Domitian - knowing that the series ended with the death of Titus and (thanks to reading one of the short stories set after this novel) with the childrens' exile, this is what I was expecting, and I was really pleased to see the story take a less predictable direction. Titus' final words, 'I have only one regret', also remain mysterious, though it is heavily implied that they referred to Jonathan's mother.

The other historical event that had been nagging at the back of my brain since reading The Colossus of Rhodes is that, by AD 90 at the latest, Flavia's beloved 'Floppy' (Valerius Flaccus) will be dead (this book is set in AD 81). This is neatly solved in this volume by having Flaccus fake his own death, to enable him to marry Flavia. This seems a rather drastic solution to their social inequality and Domitian's disapproval, but it makes for a wonderful dramatic gesture as Flaccus chases Flavia's ship in a classic last-minute romantic chase and perfectly solves the tricky problem of his impending doom - Flavia can now enjoy a much longer happily-ever-after and Flaccus becomes, essentially, a fictional character (leaving the publication of his poem, abandoned in a hurry, to Pliny).

This leaves, historically speaking, the reign of Domitian, and there are plenty of hints here concerning how that will pan out. This book is certainly not for younger readers, as Domitian's treatment of Flavia and especially Nubia, though kept at PG level, is seriously unpleasant. However, after seventeen books, I imagine that most readers have grown up with the series - perhaps not to quite as advanced an age as in the case of Harry Potter, whose characters are much older by the end, but certainly to a stage where they may start to understand the material here. Readers certainly come away with a clear picture of Domitian's character and could probably make some safe predictions for his reign before looking at a history book.

Some of the fictional threads that have run throughout the latter part of the series are left open for possible future development. After finishing the book, I realised that I am going to have to accept that poor uncle Gaius, last heard of missing following a shipwreck at the beginning of The Scribes from Alexandria, really is dead. I was rather upset to see him so swiftly killed off after being recovered, and the lack of a body results in something of a lack of closure, but it does accurately reflect the realities of sea travel, especially in an age without radar or search and rescue facilities. Or lifeboats, I suspect. And I still hold out some hope for him - I've read enough fiction to know it ain't over till the funeral dirge sounds (and given how much fantasy I read, sometimes not even then). The other major unsolved mystery is what happened to Jonathan's baby nephew Popo - more on that in our interview with Caroline Lawrence tomorrow.

The major fictional stories, however, are nicely, satisfyingly wrapped up. Nubia and Aristo's marriage occurs in a spine-chillingly awful context, but they seem happy once they're all sorted out and, much as it seems thoroughly wrong to modern readers, in ancient Rome, a twenty-something marrying a thirteen-year-old was perfectly normal. Forcing our heroes into exile provides a perfect sense of closure, to Flavia's childhood as well as to Titus' reign, to their life in Ostia and to Flavia's career as a detective (possibly). Flavia herself gets a lovely send-off as the people of Ostia show their gratitude for her help over the course of the series, in a scene that reminded me very much of Buffy's 'Class Protector' award at the end of series 3 of Buffy the Vampire Slayer, which also always makes me cry. Having seen their life in Ephesus set up at the end of The Prophet from Ephesus, we can be reasonably sure that happiness and prosperity awaits the children (with the possible exception of Jonathan, who still has a missing nephew and broken relationship with his father - that poor kid can't catch a break).

The Man from Pomegranate Street is a fast-paced read, a thrilling adventure (there's all sorts of excitement in caves that I haven't room to mention) and a satisfying conclusion to an excellent series. I felt terribly sorry for the romantically disappointed Suetonius, but we are left with a clear intimation for the future for both those left behind in Rome - the historical characters 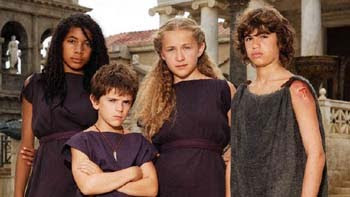 Suetonius, Pliny, Josephus and Domitian - and for those in Ephesus - the now fictional 'Jason', Flaccus having named himself after his own principal character, Flavia, Jonathan, Nubia, Aristo and Lupus. The whole series could be read as one long rite of passage, but Flavia and Jonanthan in particular really leave their childhoods behind here - as, of course, does Nubia when she gets married. Whether this is the last we'll see of them remains to be seen - tune in tomorrow...
Books Children's Literature Roman history The Roman Mysteries