Bit of a memorable episode of Rome, this, and unfortunately, not really for the right reasons, though you can say this for it - there's plenty of drama here.

We open on a dramatic desert scene with a dying elephant (and, being British and therefore animal-mad, I am of course more distressed by the injured elephant than by all the human carnage around it!). Cato has lost a battle and is feeling very depressed. He makes it to the town of Utica, where Scipio tries to persuade him that 'where there's life, there's hope' to no avail. Cato clearly has some kind of prescient knowledge of Captain Oates, because his last words are,
'If you'll excuse me, I need to urinate. There's a piss-pot through there, I believe.'
And he kills himself. Not quite as dignified as 'I'm going outside, I may be some time,' but the same essential sentiment, I think. Scipio kills himself too.

Caesar has returned to Rome and Boring Soldier and Dodgey Soldier are once more planning to leave the army. Boring returns home and he and his family actually seem happy and prosperous for once - that'll never last. This is also the start of the storyline that originally had my housemate and I change Pullo's name from Interesting Soldier to Dodgey Soldier, as we see that he is still particularly keen on Eirene, to whom he's actually very sweet at this point. Octavian has also returned to Rome - for some reason we are re-introduced to him while he wees against an aqueduct. Did the writer of this episode complete the whole thing while desperate for the toilet, or something?! I mean, we've all gone behind a bush from time to time when necessary, but I don't see why we need to see it.

By the way, we've now reached 46 BC, having started in 54 BC, eight years previously. And yet, miraculously, neither Octavian nor Boring Soldier's children have aged a day. To be fair, they have made some effort to age Octavian a little, through dialogue, general confidence and possibly some face fluff (and the later re-casting was not a good idea). And I don't think we met Niobe and the children until 49 BC, so her love child, who looks about 3 now, is about the right age. Still, we will keep an eye on them, as, if I recall correctly, this will be a recurring issue.

Brutus and Servilia are going to dinner at Atia's, at which Caesar will also be present, much against Brutus' wishes, who knows this cannot be a good idea. Servilia insists her problem with Caesar is purely political, and is a bad liar. At dinner, Octavia wears a rather nice dress while Octavian explains how he would put the world to rights if he were Caesar. This is rather brilliant, as, of course, he explains exactly what he will later do after he's finally defeated Mark Antony and his ideas impress Caesar, presumably leading to Caesar's adoption of him in his will (though his declaration that he would rather focus on his poetry is quite amusing).

Boring discovers a thug about to cut someone's nose off in the street and ever-so-nobly intervenes, which is of course a very bad idea among proto-Mafia-run society (though it is also the beginning of his eventual metamorphosis from Boring into The Godfather. When we get to season 2, I may consider re-naming him).

Octavia tells Servilia that Atia thinks Caesar and Octavian are lovers, but Octavian insists the incident related to a 'terrible affliction.' This is where Rome's determination to present viewers with as much sex as possible and make said sex as dubious as possible takes a turn into the Land of the Utterly Ridiculous. Servilia wants to know what the 'afflication' is, hoping it will give her a weapon against Caesar, so she dispatches Octavia to discover it from Octavian, whose idea of a good time currently consists of reading from Catullus' love poetry. Octavia pesters him about 'terrible secrets' but can't get what she wants. So, eventually, Servilia persuades Octavia to resort to desperate measures and seduce Octavian, to get him to tell her what she wants (which isn't even an especially vital piece of information).

This is just utterly ridiculous. Incest was as much a taboo in Rome as it is now (which, to be fair, Octavian points out). Cleopatra was married to her brother because they were Pharoahs, but Claudius was criticised for marrying his niece - sisters are right out for Romans. Caligula and Commodus were accused of incest with their sisters, and Nero with his mother, because the historians writing about them didn't like them and wanted to paint them as psychotic lunatics. And we are supposed to believe this of Octavian, a man who will eventually consolidate his power partly through a 'back to basics' style insistence on returning to 'old-fashioned morals' and who will banish his daughter and grand-daughter for sexual promiscuity. This does not necessarily imply that he followed such a strict moral code himself - Suetonius suggests quite the opposite - but I really think incest with his sister is going too far. Also, ick.

It doesn't work anyway, because Octavian is ten times more intelligent than anyone around him and is well aware of what Octavia's up to (though clueless as to Servilia's involvement). On an extra random pedantic note, Octavian also insists he doesn't have anything 'comical' to read, in which case his collection of Catullus' poetry is seriously lacking.

While all this is going on, we also get treated to a stark naked Dodgey (he's looking good, been working out) and the proto-Mafia have caught up with Boring. He sends the children away to the country to protect them, but his backside is, once again, saved by Caesar who, once again, Boring 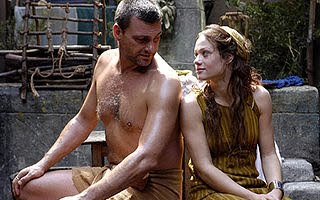 insists on insulting and refusing his offer of a political position (when will he learn?! If he was Thomas More, his head would be on the block for refusing to bow to Caesar's power). Luckily Caesar talks him into it (and his wife and slaves, about to be killed with him, breathe a collective sigh of relief!).

Atia finds out that her children have been engaging in extremely dodgey activities and attacks both of them with a whip - but Servilia has told Octavia that Atia had Glabius killed so they're pretty much all even on the naughtiness front. Thanks to Servilia's blatent manipulation and Octavia's sense of guilt, Atia actually suceeds, again, in convincing Octavia that she really didn't do it.

Dodgey gets drunk and starts yelling for Eirene, who apparently reminds him of his mother (Freud would have a field day). His mother was a slave, he says, which begs the question of why he's not and how come he's in the army (the children of slaves were born slaves, owned by their mother's owner). Then he makes Eirene take off her dress so he can touch her up and, since she's a slave, she has no choice but to obey. This is all very Roman, but at this point, Old Housemate and I sat, mouths open, staring in disbelief at the television - this is one of our heroes? One of the characters we're supposed to care about and take an interest in? Roman or not, I have absolutely no interest in following or caring about a sexual molestor of women or a rapist (which, if we had listened properly to the earlier dialogue, we would already have known he was). We re-christened him 'Dodgey' then and there, not even thinking that his behaviour was going to get even worse...

The episode ends with Atia's men physically attacking Servilia in the street. This last part of the episode seems rather determined to make the audience dislike or disapprove of just about every character except Boring and Niobe - though it has the benefit of making Boring look really good, and from this point on, I preferred him to Dodgey by quite some distance.

This episode isn't quite as successful as 'Caesarion', being a bit less focussed and including some truly ridiculous plot developments. It's also worth noting how often I used the words 'again' or 'once more' in this re-cap - an awful lot of this episode is repeating old threads. However, having said that, it's pretty good. There's a real menace to Boring's encounter with the proto-Mafia and it's wonderful to see Octavian back again. It's just a shame that the attempt to make the plot even darker involves de-railing the characters of Octavia, Dodgey and even Octavian. Luckily Octavia and Octavian would both recover - Dodgey, unfortunately would get much worse before he got better.
Roman history Rome TV