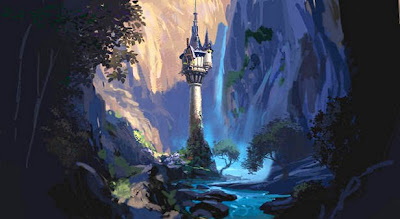 Brother and I went to see this yesterday and were pleasantly surprised to discover it was much better than we were expecting. This is a real return to magical form for Disney, with all the the enchantment, humour and soppiness-but-not-to-much that you want from a Disney fairytale (plus, any movie that implies brown hair is a better thing to have than blonde gets my vote!). It also features a really scary villain, creepily animated and given an evil edge by the rather sinister repetition of 'mother knows best', possibly one of the spookiest Disney villains since Snow White's witch-Queen.
As the film began, I noticed that the palace guards seemed to be dressed like Roman soldiers from the waist up (with trousers on the bottom) and I wondered of this was a coincidence of design, or deliberate. I decided it must be deliberate when the name of the captain's horse was revealed to be Maximus! This might still be down to simply liking to sound of the name, but I think there's a bit more to it than that, given that the male lead's assumed name 'Flynn', for a swashbuckling thief in the woods who sports a natty little goatee thing, is certainly not a coincidence - the writers have put thought into these things.
Maximus was my favourite character in the movie - a horse who occasionally acts like a dog and who has the most fantastic frown I've seen on an animated character in a while. His antagonistic relationship with Flynn also gives him a slight extra edge as an animal character - while the role of cute animal sidekick in the traditional mould is filled by Rapunzel's chameleon, Maximus, Javert-like, spends half the movie pursuing Flynn before Rapunzel turns the charm on him. The fact that neither animal, no matter how ridiculously anthropomorphised (and, in Maximus' case, canine-ised), ever speaks is also quite refreshing.
Tangled takes place in the traditional pseudo-Germanic fantasyland of European fairy tales, complete with turreted castle, extensive woodland and craggy rocks, but somehow the half-Roman guards fit in rather well. There's something about pseudo-Roman armour that says 'guard' to the collective imagination - Discworld guards frequently have Roman-ish
elements to their armour as well - presumably because medieval guards' armour was often loosely based on Roman styles, though the history of armour is not really my thing, so I don't know this for sure! Maximus, meanwhile, pursues Flynn with a doggedness of which his namesake would be proud and goes on to lead the troops (still without speaking, goodness knows how that works), while the name continues to give the same impression of size, strength and power that the original Latin term embodied. 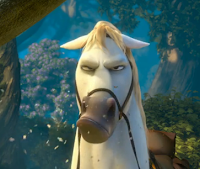 Tangled is a joy, a sweet, funny film which will have little girls all over the country demanding pink princess dresses next Christmas, while little boys hopefully will not take too many life lessons from the joyfully irreverent hero.
Disney Films Latin Roman history Sci-Fi and Fantasy