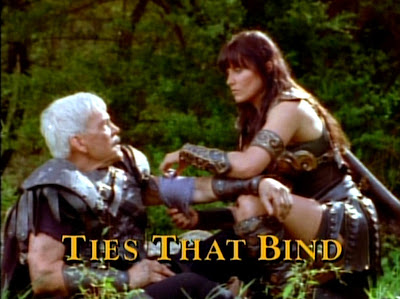 Owing to an unfortunate DVD mix-up, I've had to abandon my plan to review Xena entirely in order, but I will try to go back and catch up on the missing episodes whenever I can. This episode appears somewhat later in Season 1, and I'm very happy to see that Gabrielle has finally got herself some more attractive and more practical clothing, even if it is still orange.

Ares is a more warlike god of war here, but also even more totally nasty, as his unfortunate underling discovers to his cost. It's interesting that the god of war is presented as an evil so-and-so (I haven't seen any of the Hades episodes yet, so I don't know whether this is in addition to the usual pop cultural identification of Hades as The Bad Guy or instead of it). I really like this idea, that identifies war and battle of any kind with evil, which is totally different from how the ancients viewed this god (I suspect that, a few years on, this idea would never have got anywhere). Most depictions of Ares follow the ancients more closely, portraying him as perhaps a little trigger-happy, but more powerful than bad, a god you want on your side rather than a god to fight against (not that having him actually did the Trojans any good, but still). He's certainly a much more interesting and unusual choice than Hades for the position of 'evil god of the pantheon', something that didn't exist in ancient mythology but that modern interpretations seem to feel is necessary to give them a strong bad guy. The choice of Ares for this role fits very well with the series' overall theme of redemption and striving for peace (albeit through the medium of vast amounts of fighting while wearing skimpy armour).

Ares is also much more cunning than last time and shows how close Xena still is to her former, evil self by presenting a scenario that might drive anyone to a desire for violence and revenge. As Xena screams 'kill them all!' it becomes clear how much she needs Gabrielle around to hold her back, and Gabrielle hitting her over the head is both an important step in the development of their relationship and totally awesome.

We learn some more about Xena's personal history when she talks about her father, which is nice - there's nothing particularly strange or startling to be learned, just the sad but frequently-heard story of how she worshipped him and then he left (see also: Buffy, B'Elanna Torres) but it's nice to know a little more about her anyway. And Xena taking over an army is naughty but rather cool, though I was thoroughly amused by how much 'Hail Xena!' sounds like 'Hail Caesar!' (well, it does to me anyway!).

The B plot involves Gabrielle's interactions with a group of girls she and Xena have rescued from slavery, but who did not all want to be rescued. At first I thought this might be a really interesting exploration of why someone might sell themselves into slavery and how desperate you would have to be to do so, something that did happen in the ancient world, but it turns out this particular young woman offered herself in place of her sister - which is a good story and very noble, but not quite such an interesting sociological concept. 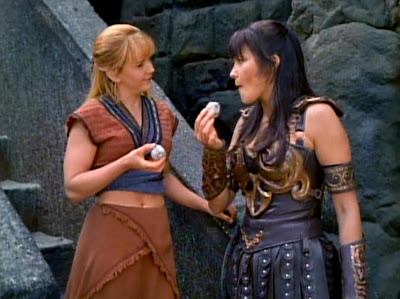 I enjoyed this episode a lot more than I thought I would. Ares didn't really appeal to me much as a character last time around, but here he plays a more interesting role with cleverer plan and allows us a glimpse into another side of Xena's personality. And he has a rather nice line in funky earrings.
Sci-Fi and Fantasy TV Xena