The Ides of March (by Thornton Wilder) 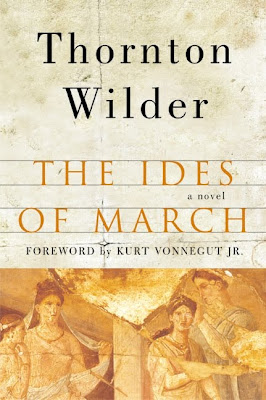 In the opening pages of Knowledge of Angels – a book I studied for A-Level and, I’m afraid to say, loathed intensely – author Jill Paton Walsh correctly observes that any novel, no matter where or when it is set, is ultimately about the time and place in which it was written. All writers of historical novels know this, but there is still a certain amount of leeway in how one approaches another time and place. Some authors try to recreate the novel’s setting, as far as possible, for their reader, making only the most necessary of deliberate adjustments to ensure that their characters are relatable for their readers. Some deliberately (over-)emphasise the exotic strangeness of their setting and attempt to make it as different from their own society as possible, exaggerating the differences between the novel’s setting and their own and playing down the similarities. Finally, some simply write their own society with costumes on, either because they want to emphasise common themes of human existence, or because they actually want to write about their own society on a metaphorical level. The Ides of March falls firmly into this third category.

When the society reflected in the novel is my own, I often find this approach quite appealing, since it makes the book immediately relatable and fairly easy to read. In Wilder’s case, however, his society is long gone and whatever remnants are still around are far from my world, which means that I am reading a book ostensibly set in Roman times through the prism of what is, to me, a second period setting (elite Western society in the 1930s and 1940s). This can be incredibly distracting for the modern reader, as every mention of the Aemilian Draughts and Swimming Club had me picturing Jeeves and Wooster, throwing me into a completely different mental landscape. Caesar’s wife Pompeia also suffers from a characterisation and way of speaking/writing that is not only rather two-dimensional, but clearly a male-written caricature from the early twentieth century, like Lasraleen from CS Lewis’ The Horse and his Boy. As it happens, I love Lasraleen, who I think is hilarious and who has always been one of my favourite characters, but that’s because, firstly, I was less schooled in feminism when I read The Chronicles of Narnia and less inclined to be insulted by this particular portrayal of women, and secondly and more importantly, Lewis was writing fantasy.

Wilder explains in his prologue that he is not concerned with historical reconstruction and wants to write a ‘fantasia’ around ‘certain events and persons of the last days of the Roman republic.’ Again, I have no objection to this in principle – many excellent historical novels take this sort of approach. However, for me, Wilder goes rather too far in constructing such a ‘fantasia’, and I was left wondering why he didn’t just write pure fantasy (and annoyed by the sneaking suspicion that he might have thought fantasy beneath him). He lays out the major changes he has made to history – and ‘major’ is the operative word here – in the prologue, and I spent much of my time while reading reminding myself of what was actually happening in Rome at this time and who was actually dead.

From the title, the reader expects a story about Caesar’s final months and the conspiracy to murder him. The first, they get, more or less – the second, hardly at all. The ‘persons’ Wilder is interested in are Caesar, Clodia, Cleopatra and Catullus. To incorporate all these people into the short space of time he wants to write about, he has extended Clodius’ life by nearly ten years and moved an incident from the 60s to the 40s, and he has Clodia at the heart of political and social life in Rome more than ten years after her retreat following Cicero’s speech in defense of Caelio. (Things get even weirder when he tries to incorporate this speech, but has it as an unsuccessful invective against the Clodii, rather than a successful defence of Caelius). I can take a lot of historical inaccuracy – Gladiator kills off Commodus and restores the republic, but gets away with it by doing so right at the end of the film, and Rome keeps Atia alive far longer than she should be, but since the real Atia was pretty much a footnote to history – she had one interesting dream, had Augustus, was a perfect Roman matron and died – they get away with that too, because there is no real Atia with which to compare their fictional version. Clodius, however, is a step too far for me. If Clodius had been alive, the course of history might have run differently, as he was a man who was active in politics, and his death and the manner of his death was also politically significant. I simply can’t compute a Clodius who is still alive – but not doing very much – during Caesar’s last year.

The characterisations of Clodia and Catullus are much like those we’ve seen before and no doubt will again – Catullus is an emotional wreck practically finished off by Clodia’s messing around, though here with the added dimension of burgeoning rebellion as well. Clodia is fickle, heartless, ruthless and sexually voracious. Saylor provides a much more three-dimensional Clodia – just once I would like to see a Catullus who writes passionate poetry, but is otherwise a sane and normal individual, who gets out his frustration at Clodia through poems, but carries on quite happily with the rest of his life. (Catullus, too, should be dead by now, but like Atia, he was not sufficiently politically active in real life to present a huge problem and I can buy his continued survival).

Caesar is the most successful of Wilder’s characters, partly because we see so many journal-type letters of his and get a good glimpse into his mind. He is conflicted, confused, swinging somewhere between well-meaning and dictatorial. Most interestingly, Wilder really goes into the question of why Caesar did not protect himself as much as he could, the ignored omens reported by Suetonius becoming ignored intelligence (‘secret police’ are another frequently-mentioned twentieth century device). Caesar as a character comes across as weary – as someone who has reached the very top and is still not sure quite what to do next.

This being a novel of a different time, it is refreshingly low on sex and violence, which makes a pleasant change. Sexual relationships are referred to but never in physical detail and there is little violence – Wilder even goes for the ‘fallen pediment’ version of Calpurnia’s ominous dream.
Having mentioned the biggies, there isn’t room here to list all the various (deliberate) historical inaccuracies, but I do think one is worth mentioning. Wilder’s Cleopatra is a strange creation, part child, part mother and part politician, but the strangest thing about her is her sense of identity. Caesar claims that when he first met her she was insisting that she was not Egyptian at all, that this was not true, and that he encouraged her to adopt Egyptian customs, which she now does to the extent that she speaks and writes in Egyptian. This is nonsense from start to finish. I don’t know what Cleopatra’s exact ethnic make-up was (that’s a controversy I’ll avoid!) but I do know that she was lagely, and certainly by identification, Greek. However, she was also Pharaoh and her ancestors had long ago adopted Egyptian customs and blended various elements of Greek and Egyptian culture, including religion – Wilder has Caesar claim this was his idea, but the Ptolemies had been doing this since they first gained the rule of Egypt in 333 BC. And Cleopatra spoke Greek (and probably Latin). Perhaps she spoke some Demotic Egyptian as well, but she would never have written to Caesar in that language. I honestly can’t see any narrative purpose to these changes, other than perhaps to emphasise how Caesar likes to teach and instruct the younger Queen, a point made in some detail later.

The inaccuracies of concept also became problematic in places. I don’t object in principle to later or modern activites appearing in ancient-set fiction to fill gaps – I’ve thought of doing so in my own fiction and the appearance of the Tarentella in one of the Roman Mysteries is rather fun and plausible enough – the ancient world did contain women-only ceremonies, some of which may have involved dancing. However, the things Wilder chooses to transpose just don’t work for me, as they are simply too unRoman. The Clubs all the aristocratic men belong to do not fit with the family and tribe-oriented nature of Roman aristocratic relationships, and the Rowing club is the worst – rowing may have been an aristocratic pastime in the twentieth century (Oxford and Cambridge’s famous Boat Race, for example) but in the Roman Empire, rowing was done by slaves in galleys, not by rich young men for fun. (Lucius Caesar died in a boating accident, but we need to picture the ‘messing about on boats’, private type of pleasure rowing here, not clubs, organizations and races). Then there are the anonymous letters Wilder lifts from Italy under Mussolini – but transposed to a country lacking the invention of the printing press and where ‘democracy’ was actually thinly veiled oligarchy anyway, this, again, just doesn’t work.

The form of the novel – presented as a series of historical documents – is very interesting. I love the idea and in places it works really well, especially when we are given the chance to see different viewpoints of the same event. I did, however, find the grouping of ‘documents’ into themes, complete with cross-references, very off-putting. When reading something in Book 1, the reader is suddenly directed to Book 4, and back again, as if studying for an essay. There are ways in which authors can successfully play with time in novels, but for me, this was not successful. I follow cross-references to other sources all the time in the course of my work and have no desire to have to do so while reading a novel, and keeping track of the dates, which were all over the place, became very confusing. 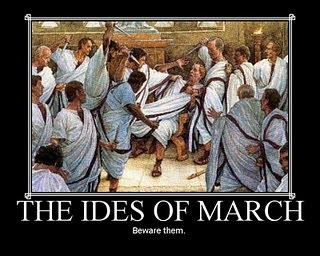 One last point of historical interest – the murder of Caesar is recounted in Suetonius’ words in the novel’s last page. It follows, therefore, what Suetonius said – except that, to match his suggestion that Brutus was Caesar’s biological son, Wilder translates ‘child’ as ‘my son.’

This review sounds rather more negative than I mean it to be, because there are so many things I find strange or frustrating about this novel. So I will end by saying that I thought it was very nicely written, with mostly three-dimensional, breathing characters and that it told the events it wanted to tell effectively. However, I was surprised by the lack of attention paid to the conspiracy to murder Caesar and the amount focused on Clodia and, to a lesser extent, Catullus. I can’t help thinking that Wilder should simply have set his novel 15-20 years earlier and called it ‘Caesar and Catullus.’
Books Roman history