The Roman Mysteries: The Trials of Flavia Gemina (TV adaptation) 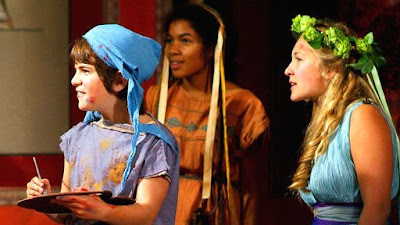 The Roman Mysteries TV adaptations are being repeated every day on CBBC from 11.25am this morning, so this seemed a good time to review the next episode in Series 2. Major spoilers for both the book and the TV episode follow.

The book on which this is based on is one of the warmer, cosier Roman Mysteries, in which the main, apparently criminal mystery for the most part exists only in Flavia’s mind. In the book, this warmth is counter-balanced by the tragic ending, one of the saddest of all the Mysteries (in fact, for me, I think it may be the saddest. The Slave Girl from Jerusalem also has a tragic ending, but in that case I was about equal parts terrified and sad – it’s interesting to note that neither tragedy is entirely impossible in the modern Western world, though both are now much less likely).

The TV episode changes this ending by replacing the character death from the book with a muted break-up instead. To compensate for the resulting absence of serious danger (and to provide some exciting action sequences) the TV episode ups the ante on the book’s other main plot, concerning the escaped animals intended for the arena. This story is also heavily modified to be more appealing to a twenty-first century audience, as Taurus the sympathetic animal trainer desires freedom for both himself and his animals, a thread entirely absent from the book (as far as I remember - this may be the moment to confess I've left my copy in Wales!). This makes the story considerably less historically accurate – in a slave-owning society, animal rights were not a priority. The animal sequences themselves, though, are well done and the transposition of Nubia’s bravery when facing a lion so that she confronts the lion to save Aristo, and has much less success taming it, has the desired effect of demonstrating in a dramatic, visual way her feelings for Aristo.

It was nice to see a modified version of one of Flavia’s dreams from the book, which in the novel play an important role in both the plot and in Flavia’s character development. The dream is shot in quite effective whitened out colour (over-exposed, possibly?), though I’m not sure why the director decided not to show Flavia’s mother’s face. I suppose it makes the transition between Flavia’s mother’s dream-ghost and the living Cartilia watching over her more obvious and clean, but it’s so obvious that they’re desperate not to show the mother’s face that it’s rather distracting, and given the changes to the ending of the story, this is a less important point to make anyway.

Jonathan’s role in this episode is filled by Polla Pulchra, from The Pirates of Pompeii, because of a scheduling conflict. For the most part, this works fine – the writers use the substitution to their advantage in some sequences, such as an early scene depicting Flavia’s childish and unreasonable behavior in which she is rude to Pulchra as well as to Cartilia. Pulchra’s interactions with Lupus, however, are a bit too Jonathan-like and his presence is missed – though I was impressed to see that Flavia’s dream wedding (or rather, nightmare wedding) briefly featured Jonathan rather than Pulchra, which shows a nice attention to detail.

This was a fun episode, which included several pleasant moments of humour, and it was nice to see more of Flavia’s household (Caudex appears again, and of course Aristo plays an important role) in a more everyday context than the series’ dramatic opener. However, where the book was driven by significant character development for Flavia and, to a lesser extent, Nubia, the TV adaptation glosses over that aspect a little. By diluting the emotion of the ending and presenting Cartilia as a more flawed character, the TV version strips some of the life-changing development from Flavia, which is particularly unfortunate given that this story has been moved to a later point in the series. However, it does drive home the most important point – that Flavia will soon have to grow up, and that her father is looking for suitors for her. This will become even more important over the next few episodes.
Children's Literature Roman history The Roman Mysteries TV