Spartacus Gods of the Arena: Beneath the Mask

Straight into the arena for this episode, which is fun. Someone gets his fingers cut off within the first two minutes and I'm honestly not sure if he's a competitor or a spectator (I was looking at the computer). Batiatus is signing the praise of retiarii, which is always fun - if you're making a TV show or film with gladiators in it and you want to show off your research, a retiarius is the easiest type of gladiator to include, because they're fairly unique to Rome and easily identifiable, with their net and trident. Batiatus and Pater actually seem to be getting on reasonably well, which can't be a good sign. Pater has got to be dead by the end of this episode, surely. (Edit: apparently not. He's got some impressive staying power, that man).

The Silly Beard Men are still yabbering away in Syrian and I think the chief Silly Beard Man may be Gnomy Guy from the main series, though I honestly can't remember. He apparently has the ability to chop right through an iron helmet, which I think may make him a superhero of some kind.

Not!Octavian introduces his new guys while Batiatus and Pater carp at each other. Batiatus refers to the opening Games of the new arena, which we saw under construction in the opening shots - I was under the impression that arenas during this period were always temporary, but I suppose this could be a new, temporary arena.

Gaia threatens to leave until Pater is out of the way, which upsets Xena, who has clearly grown extremely fond of her (she really ought to go off and find Gabrielle instead, who is much nicer and less... um... less). Gaia finds some random bloke from Rome (Petronius) who doesn't seem to remember her but who does remember the reputation of Xena's household - she really ought to just go into the madam/prostitution business and have done with it, she's clearly a much better madam than Batiatus is a lanista, by reputation anyway. This rather upsets Xena, but Gaia just sulks that he's more interested in Xena's slaves than in her and Batiatus will do anything for business.

Gannicus is sulking because he's not allowed to fight and Wife is avoiding him. He thinks the way to deal with this is to go on about how much he thinks about her, in which he is sadly mistaken. DSG, meanwhile, is perturbed that Gannicus will not obey him, but Wife gives him a pep talk and then they do the sex, which I think must be DSG's first sex scene, and it's bizarrely brief - does Peter Mensah have a no nudity clause in his contract or something? Everyone else is on display all the time. Not that I mind, it just stands out a bit when everyone else seems to be in a different movie.

Pater still has that nasty cough, which I still think must be the result of some slow-acting poison. He agrees to go to Naples with Batiatus so they can choose a champion together, which gets him out of the way so Xena can do her madam thing. DSG lets on to Silly Beard/Gnomey Man that they only keep him around to translate for the other Silly Beard Man, which I guess is why the taller one doesn't survive to the main series (jealousy can be a terrible thing). Crixus tries to bond with Barca over the fact he killed Barca's worse half, which doesn't seem like something that should work, but somehow it does.

At Naples, Batiatus insists that Thracians are too difficult to control, which almost made me laugh out loud (Spartacus was Thracian). Naevia's friend is upset over the abuse visited on her in the previous episode and I suspect she'll kill herself before the series is out, while Xena is blackmailing Wife and looking much less guilty about everything (and I suspect Wife will kill herself before the end as well. Or maybe I'm just thinking of Rome...). Earring has come along as well, to offer moral support, or immoral support, or something. Xena offers everyone present any gladiator or slave to do whatever they want, which is a bad idea as at that moment Max from Neighbours turns up.

It turns out Pater doesn't approve of Xena, which explains a lot, though if he felt that strongly about it he should have forbidden the marriage, which as paterfamilias he could have done. He has also worked out that Batiatus is Up To Something but is hoping to talk him around to his point of view while in a fresh place. He's fed up of travel now, though, and has decided to go homes and embrace a closer future with his son. Dum dum duuuuummmm.

Xena initiates a masquerade for her guests with masks representing the gods (because crazy sex parties are always cooler with masks) and Max decides he wants to challenge Gannicus which means he's either really stupid or much handier with a sword than he's letting on. DSG warns Gannicus to make sure he loses without injuring Max, which doesn't please Gannicus at all. Gannicus swallows his pride and plays along, however, and even surrenders to Max when he could have beaten him, and only Xena's intervention prevents Max from killing him. Gannicus becomes sufficiently frustrated to nag Wife about how he feels about her and grab a snog, which doesn't make anything better for anyone.

At this point, we get into our first proper, full on Roman orgy of this series. I'm amazed it took them three and a half episodes to get to it. How on earth Naevia escapes all this still, according to Xena, untouched by the main series is a mystery. Silly Beard Man starts promising the services of his taller, non-Latinate friend, partly out of necessity and presumably partly out of revenge for his friend's greater success in the arena. Xena, Gaia and Earring are keeping an eye on Max, who is acting suspiciously by not drinking or having sex with anyone, so Gaia takes him off for a little talk, and it turns out they're childhood friends. Then they do the sex as well, while simlutaneously trying to blackmail each other, as far as one can tell (I think he wins).

The net result of all this is that Pater discovers everything and somehow blames Xena, who is determined to gain vengeance (oh please, let her put on a metal brestplate and brunette wig and do Max in with that boomerang spinning disc thing she uses in Xena: Warrior Princess). You can't help feeling genuinely sorry for her, since whatever else she's done, her friend has just been horribly murdered in her house. Pater explains he let Batiatus marry her because he thought it would keep him happy, but that lack of an heir (among other things) means she must be got rid of. This is completely reaosnable for a Roman, as fertility problems were thought to be entirely down to the woman and it was normal to divorce a woman if she couldn't have a son, though not everyone did so - there are examples of couples staying together without children, Augustus and Livia being the most famous.

The death of Gaia is surprisingly tragic given she was such a over-the-top character, but Xena really loved her, and Batiatus' reaction to his father's suggestion shows h 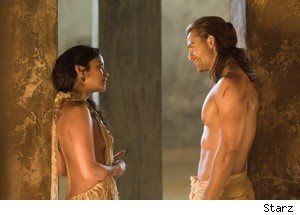 ow much he really loves Xena as well. This prequel series is really doing well at making you feel for Batiatus and Xena and sympathise with them - not enough to excuse their awful behaviour but enough to make you feel some sympathy for them. They really have turned their house into a brothel now, though, which does make some sense - selling the sexual services of gladiators was certainly something that went on - but is a bit OTT. Still, this was an intriguing episode that moved the plot along nicely - and we could hardly go through a whole series of Spartacus without an orgy, could we?!
Roman history Spartacus TV