Dead in the Family (by Charlaine Harris) 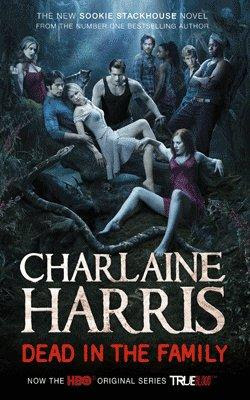 Yes, I have now read up to Book 10 in this series already. No, I haven't read any more of the things I'm actually supposed to be reading. Yes, it is true, I have no willpower whatsoever and am lucky books and TV shows are my worst addictions. No, I haven't read the new one, Dead Reckoning, yet, because the postal service round here is truly awful (no spoilers please!).

We already know (from Dead and Gone I think, but to be honest they've all started to blend together in my head at this point) that Book!Eric's maker was a Roman called Appius Livius Ocella. In Dead in the Family, we actually get to meet him, though he doesn't make quite as much of an impression as his other offspring, only the second famous vampire we meet in the series, Alexei Romanov (is that a pun? Roman/Romanov? I don't know, I'm very tired!).

TV!Eric's maker, Godric, was a fluffy bunny of a vampire who just wanted peace, love and forgiveness. OK, he was an awesome fluffy bunny who got rid of evil human rapists, and a fluffy bunny who'd clearly been pretty hardcore/badass/downright evil back in the day, but by the time we meet him, fluffiness is definitely to the forefront of his personality. Godric's purpose, TV-wise, is to provide Eric with what TV Tropes would call a Pet the Dog moment, to prove that there are actually some feelings under there and he doesn't spend all his time throwing people's dismembered arms around the cellar, since that's not something a girl generally finds attractive. I haven't read the first three books yet, so I don't know how Eric comes across in them, but in later books he's definitely a touch soppier than his TV incarnation, so presumably this was not such an urgent concern for Book!Eric.

As a result, Book!Eric's maker turns up much, much later and is a thoroughly different kettle of fish; a hard-as-nails Roman with an unfortunate soft spot for psychotic young boys. (TV!Godric is about the right age to be a Roman as well, but he never mentions it, except to note that he missed Jesus). Book!Eric is sufficiently fond of his maker to object to Sookie's attempt to off him as soon as possible, but he gets over Appius' subsequent death-by-enraged-fairy pretty quickly, having spent most of Appius' visit in something of a state of tension, a bit like his mother-in-law's come to visit, and brought a dangerous psychotic with her to boot.

Because there's no need for Book!Eric to demonstrate his soft side, since he's done that a few times already, his maker can be that much scarier. The casting of said scary maker as a Roman works brilliantly. The fact that the Roman world was a bit more bloodthirsty than ours is something that comes up a lot in popular culture, but never with any subtlty. Representations of Romans tend towards either giving us heroes who are just like us and way ahead of their time in their dislike of gladiatorial Games and so on, or they go in the other direction and give us wildly bloodthirsty Romans who revel in blood, gore and sex as much as possible (Spartacus: Blood and Sand, I'm looking at you).

What Harris gives us here is a slightly more subtle interpretation of a Roman (bearing in mind that this particular Roman is also a vampire, and a certain amount of violent bloodthirst comes with the territory). Appius has an even more casual attitude towards murder and mayhem than your average vampire, because he lived in a world with gladiatorial Games in it. However, this attitude doesn't sway into the realms of the ridiculous and as far as we know, he doesn't organise any orgies (though to be fair, Sookie doesn't know what's going on at Fangtasia for days at a time, so perhaps the jury's out on that one). Similarly, the book avoids implying Romans were Classical Athenians (where close, sexual or otherwise, relationships between older men and young boys were the norm among the elite) but at the same time, notes and makes a plot point out of the fact that having a sexual relationship with a thirteen-year-old boy would not seem criminal to a Roman - in fact, they wouldn't see anything wrong with it. Appius is just Roman enough to seem thoroughly foreign and downright creepy to Sookie, while staying the right side of totally ridiculous.

Harris doesn't include any major errors on the Roman history side, and she provides the currently accepted pronunication for the Latin name ('Li - wee - us'). Although most of us read Latin with the 'w' pronunciation for 'v's, I don't think I'm alone in reading names within a translation or English book with the 'v' - Livia, not Liwia - so that actually threw me for a moment, even though it's correct! I liked the emphasis on the importance of the different names and which ones are only for close family members to use. One of my favourite things about the books and the TV show is Bill's Civil War-era speech and vocabulary, so I was mildly disappointed not to see 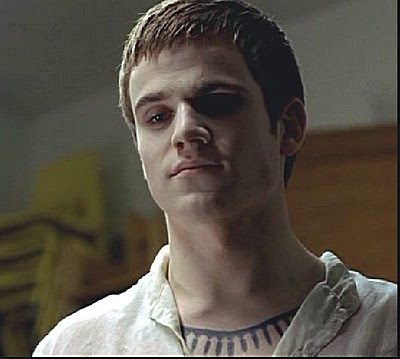 Appius' speech marked out that way, but then, as we've seen in Gods of the Arena, that can go too far when the original language is Latin, so it's probably for the best and I guess Appius would have learned modern English anyway.

Godric. Much nicer than Appius. Equally doomed.
Appius really is a very creepy and unpleasant presence in the book, although his actual 'screentime', as it were, is limited. I rather like this use of a Roman as a positively terrifying presence, due partly to his being a vampire, but also at least partly to his being a Roman (largely in the area of sexual morality - but treated realistically for once, and not orgy-based). So often the Romans are the protagonists in any story in which they feature, it's refreshing to see the nastier side of ancient Rome brought to the fore. I'm rather sad Appius got offed, as he was an interesting character, but still, he was pretty nasty, so he's no great loss, and given the series' tendency to kill off just about everyone who isn't Sookie, one of her love interests or her brother, I'm just relieved it was him that bought it and not Pam...
Books Latin Roman history Sci-Fi and Fantasy TV Vampires