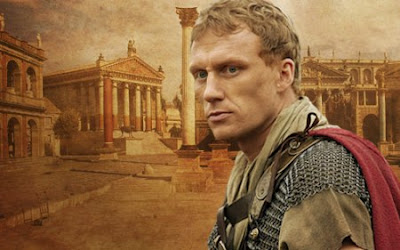 So, when we last left Rome, before Spartacus: Gods of the Arena started, Dodgey had just demonstrated why he's called Dodgey, Boring was being boring, Caesar had Triumphed and Atia was trying to persuade Octavia she's not a psycho, with limited success. This episode opens with Dodgey murdering someone, so presumably he's now a hit-man on top of everything else. Boring, however, is now a magistrate and has started to meet his clients as patron, which involves sitting in a chair, throne-like, surrounded by his family. Quite why his entire family want to watch all the proceedings I'm not sure, but he's pulling off the big man in town thing rather well (being mean to former friends etc) so I think the time is right to re-christen him The Godfather.

The Godfather (formerly known as Boring) insists that Pullo is 'dead to him' and tries to persuade his old friend that he can't help Caesar's disgruntled veterans. Dodgey is not doing so well, getting robbed by prostitutes and turning down tasty mouse for lunch.

Caesar invites The Godfather and Niobe to one of Atia's dinner parties (he calls it a symposium, but those were men-only-except-dancers-and-prostitutes Greek dinner parties, so he's being misleading there). Caesar also has himself declared Dictator for Life and has the fifth month named after himself, which causes Cassius to look like he's swallowed something sour. Brutus, meanwhile, is just mildly amused at a bunch of graffitti showing him stabbing Caesar, to emulate his ancestor who killed the last king. Brutus notes that the plebs like to see the rich fight because 'it's cheaper than the theatre and the blood is real' and I can't help thinking he probably has a point there.

It's time for Cassius and Brutus to start having Shakespearian conversations about Caesar, death of, the future of the Republic, etc. but they stay impressively far away from actual Shakespearian dialogue for the moment (it's just so tempting for writers, when such juicy dialogue is right there ready to use).

Dodgey is getting really sloppy and I can't help thinking maybe he's attempting the Roman version of suicide by cop. He's going soft, letting old ladies live and hallucinating them afterwards. The Godfather has managed to get something for Caesar's veterans and for his old friend but the bit of land in question does not please, so the old friend continues to whinge and I kind of wish we could set Dodgey on him. Although I've seen the series before so I know what happens, I can't help thinking that maybe this should be Dodgey's purpose from now on - he can just be unleashed on anyone who's excessively annoying.

Mark Antony enlists Octavia to help him get back in Atia's good graces, which is interesting considering the two of them (him and Octavia, that is) will end up married with a daughter someday. Niobe is terribly nervous which is rather sweet, while the others talk about her in the way that the characters in Gosford Park talk about the girl with only one evening dress. Octavian approaches The Godfather to ask him to help Dodgey, who's on death row for murder, having murdered one of Caesar's enemies (so Caesar can't help because he doesn't want the blame). Caear absolutely forbids them to help him, so of course they will.

Atia and Mark Antony have make-up sex and even they come across as quite sweet fo once. Poor Niobe is less happy, having overheard the comments about her dress. Octavian sends Timon to find a lawyer for Dodgey and quite frankly I'm amazed that Timon is still alive, I'd have thought he'd be a goner ages ago. Having a lawyer does Dodgey no good, of course, because he's guilty as sin, though it's quite fun seeing the court case. I especially liked seeing an open air court case, as many of them were in ancient Rome (on Roman law-courts in general, see Caroline Lawrence's excellent summary here). And it isn't a proper Roman drama without a court case, though name-checking Cicero and then doing a court case he's not in is just a tease (even I, with my all-consuming hatred of Cicero, would be intrigued by seeing him in action in the courts, though probably no actor could live up to his reputation). The Godfather turns up so that his old friend can whinge at him again and explain his plan to save Dodgey, which The Godfather has to talk him out of. Dodgey is condemned to death in the arena, to no one's surprise.

Caesar and Brutus have slightly double-edged dialogue about fathers and sons (still umming and aahing around the possibility of Caesar being Brutus' father) and Caesar asks Brutus to deal with a problem he has in Macedonia, which Brutus refuses because it's hard to stab someone in the back from a distance of several hundred miles. Caesar admits he doesn't entirely trust Brutus, which Brutus has the cheek to be annoyed about. Caesar points out he can order Brutus to go and Brutus just gets crosser until eventually he gets so cross that he resorts to sarcasm.

Dodgey prays for Eirene and The Godfather to Janus, Gaia and Dis, which actually kind of makes sense for someone who's about to die (Janus, god of doorways, of ends and beginnings, Gaia is earth, in which the dead are buried, and Dis is the underworld). He's then sent into an arena which is much, much smaller and less impressive than anything seen on Spartacus: Blood and Sand or Gods of the Arena. This is probably reasonably accurate, since Rome had no permanent arenas at this time, though I would have thought the capital city would have had a slightly bigger and more impressive temporary arena, all the same.

Dodgey is no Spartacus, or Maximus; he just sits on the ground and tells the other gladiators to kill him, no matter how much they taunt him. This is all very dull for the audience and is wasn't planning suicide-by-lawyer before, he is now. That is, until the gladiators insult the Thirteenth Legion as a whole. That gets him going, and he's up and chopping. I have a feeling this scene looked more impressive the first time I saw it, before Spartacus: Blood and Sand - now it can't help but look kind of tame by comparison.

I do fondly remember the next bit though, one of the highlights of the series. Dodgey gets attacked by a steady stream of gladiators while The Godfather watches, Dodgey killing them all, yelling 'Thirteen!' all the while. Eventually a big gladiator with an evil-looking mace (literally, it's got an evil spiky head on it) comes out and stands over Dodgey, who's a bit tired out by now, ready to finish him off - and suddenly, The Godfather runs right on in, also shouting 'Thirteen!' and takes on evil-mace guy (and there is a fairly gory leg-chopping shot in there as well, plus a prolonged death). Evil-mace guy finished, he helps Dodgey up and they just walk out of the arena. It's all very touching and bromance-y and you feel so uplifted by the whole pride-brotherly-love-friend-saving thing that you forget that a) assuming you're in a culture with a death penalty, Dodgey fully deserves his several times over and b) Dodgey is a condemned criminal, it doesn't matter how many 'house' gladiators you kill off, or how many friends help you - you still have to die, unless the emperor himself happens to be around to save you, and they don't have an emperor yet. You can't just walk out and decide you've now paid your debt to society.

It is revealed to the audience that it really was Caesar, through his chief slave and a thug, who ordered the murder Dodgey was sent down for, and we cut straight from this into Brutus telling Servilia he'll get together a murder plot with Cassius. He's quite upset about it, but clearly he really doesn't like Macedonia (and who could blame him, considering what's in store for him there - maybe he's psychic). End of episode (which felt shorter than usual - I must have been watching longer things lately).

This is a nice little episode, made up mostly of quiet moments and then building to a rousing finish and nicely dramatic climax - Dodgey and The Godfather finally become t 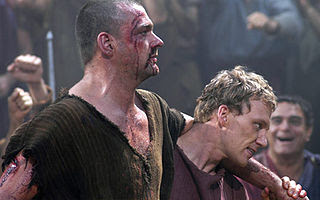 ruly sympathetic, interesting characters and we're really getting to the meat of the political story now, to the bit you can't help eagerly anticipating from the moment Caesar appears on screen. There's still a fair amount of plotting to come first though, and the next episode ensures we don't get too excited too quickly by calling itself 'The Kalends of February' - it's not all over just yet.
Roman history Rome TV