The Tough Guide to Fantasyland (by Diana Wynne Jones) 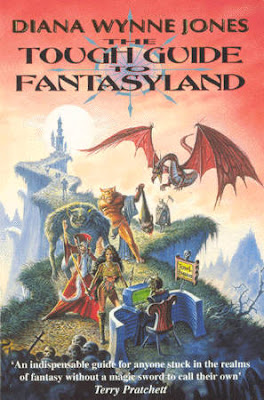 A couple of bits of housekeeping: I've made comments available to registered users only (anyone signed in to OpenID can still comment) in an attempt to avoid spending another morning deleting viagra salespeople from my comments sections. So far, unfortunately, it doesn't seem to have worked - I'll leave it this way for a while and if it doesn't do any good, I'll open up the comments to anonymous users again (if you're the viagra salespeople who keep leaving inane but vaguely relevant comments linked to your viagra-selling site on the blog, please stop doing it. I am never going to let you push drugs, legal or otherwise, on my blog and if I ever decide to advertise anything on here, that will be my decision and mine alone).

I also have a new article up at Sound on Sight, on the six best films based on a television series.

The Tough Guide to Fantasyland is a comic A-Z of common fantasy tropes written by Diana Wynne Jones back in the mid-1990s. It's written in the form of a travel guide for the adventurous Tourist (i.e. the protagonist) about to set out on a Tour of Fantasyland. The obligatory map is provided at the beginning, of course, and for some reason includes, alongside The Smoking Mountain of G'wd, the River Smealt and the Sea of Caysif, small town labelled 'Nuneaton'. This was rather surprising - I went to the railway station there once, but had no idea it was a gateway to Fantasyland. It certainly made me laugh to see it on there, though.

The rest of the book is an alphabetical encyclopedia of sorts, each section headed with a Gnomic Utterance starting with the appropriate letter (things like 'Insights are always valuable, even if they only show you your duodenal ulcer'). This includes an entry for the Vestigial Empire; the 'most civilised' part of the continent, where both food (non-stew-based) and baths are available, with the only decent roads in Fantasyland, lots of white villas and vineyards and it has 'a parliament and a senate'. The Vestigial Empire is quite clearly a clinging remnant of the Roman Empire, existing alongside the medieval setting of the rest of Fantasyland.

Like so many recurring themes in sword 'n' sourcery, this particular theme originates with Tolkien, whose Gondor has a vaguely Byzantine feel alongside Rohan's Anglo-Saxon Cossacks (another entry in the Guide). It has its roots in history, especially in Tolkien's version, as the remnants of the Roman Empire continued to exist in the form of the Byzantine Empire while early medieval western Europe developed slowly into late medieval western Europe.

The Vestigial Empire as Wynne Jones describes it, though, is not quite Tolkien's ageing glory of Byzantium and even Tolkien was creating fantasy, not writing history; all in all the whole trope is rather unfair to the Byzantine Empire. Byzantium was a large and prosperous Empire which survived the fall of Rome by a thousand years (it fell when the Turks invaded Constantinople in 1453). Although it was, technically, the continuation of the Eastern Roman Empire, it was really a force and a culture in its own right and, historically, should never be dismissed as just a lingering 'vestigial' outpost of fallen Rome.

Tolkien started the downgrading of Byzantium's fantasy equivalent when he portrayed Gondor as a fading, suffering, shrinking shadow of its former self (excluding the ending, of course). The common Fantasyland Vesitigal Empire, as described by Wynne Jones, is even more Roman and even less impressive. It is quite clearly playing on the idea of Rome, but a Rome shrunk to a much less powerful force and struggling to survive against a fantastical Dark Lord. This is the most traditional, Victorian view of Rome imaginable, as a corner of 'civilisation' against barbaric tribes and countries with no decent roads, food or buildings (I should probably reiterate here that Wynne Jones' book is satire - she is deliberately highlighting the corniest fantasy tropes around, not endorsing them!).

There was one other somewhat bizarre bit of Roman stuff tucked away in the book. The book contains black and white, sort of old fashioned feeling illustrations throughout - I couldn't find the illustrator's name, so presumably it was either Steve Crisp, who designed the front cover, or Wynne Jones herself. Under the entry for 'Palaces' was the following illustration: 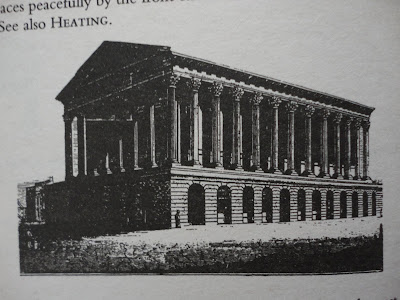 This is not a palace. It is quite clearly a drawing of Birmingham Town Hall. I recognise the entrance in the nearest corner, where we went in to see my brother play some kind of musical instrument in something, and to see Nosferatu with live accompanying organist at Halloween a couple of years ago. 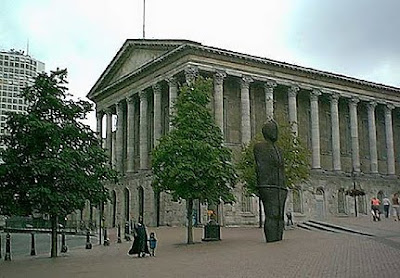 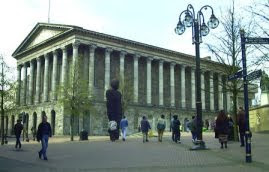 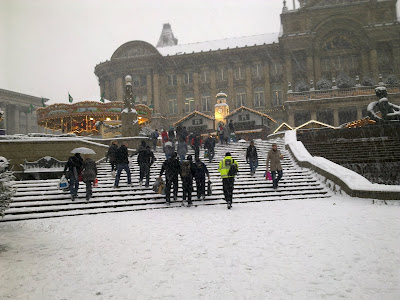 I didn't have a picture on my computer from the right angle, but here's one of mine from the snow last December - you can just about see the town hall in the far left side, behind the merry-go-round (which is part of the annual Frankfurt German Market) over the other side of the steps from the Floozie in the Jacuzzi.
I'm not sure what's more puzzling about this particular illustration - the fact that a drawing of the town hall of Britain's second city has been used to illustrate Fantasyland, or the fact that it's included under 'Palaces'. Birmingham Town Hall, you see, is such a good replica of a Roman temple that our lecturer in our first year undergraduate class told us all to go and have a look at it so we could understand Roman temples better. 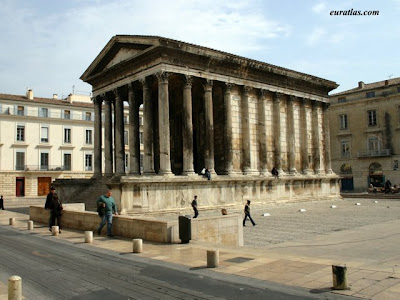 A Roman temple in Nimes, which I haven't yet seen in person, unfortunately.
Clearly, the Vestigial Empire has somehow, possibly through the portal in Nuneaton, extended itself into our world, where it's old temples are becoming palaces. For fantasy kings. Or something.

Anyway, The Tough Guide is well worth a read if you're a fantasy fan as it's good fun and some of it is hilarious - the entries on 'Horses' and 'Swords' were especially high points for me.
Books Life stuff Roman history Sci-Fi and Fantasy