The House of the Vestals (by Steven Saylor) 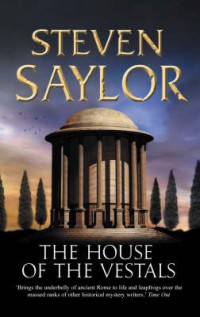 I'm delighted to say, I have a new flash fiction (short short fiction) story up at 365 Tomorrows: 'A Shared Interest in History'. Not actually as connected to Classics as the title might sound, but there's definitely a running theme in what I'm writing at the moment..

The House of the Vestals is a collection of short stories that fills in some of the gaps in Gordianus the Finder’s earlier years, between the events of his debut novel Roman Blood and the second novel in the series, Arms of Nemesis. A mixture of stories from historical records and purely fictional mysteries, the collection is broad ranging in terms of setting, subject matter and outcome and is as enjoyable to read as all Saylor’s work. The historical material is interesting, but the real value of this book for fans of the series is the way it enriches the life history and character of the fictional Gordianus and his friends and family.

The best thing about this collection for fans is that it outlines the entire friendship between Gordianus and Lucius Claudius, a character we only meet once he’s dead in Catilina’s Riddle because the country farm he leaves Gordianus in his will is required for the plot of that novel. Here, Saylor gets a chance to introduce us properly to Lucius Claudius and explain how he and Gordianus became friends, and Lucius Claudius features in several of the stories here. He’s a thoroughly likeable character, and I found myself wishing he could feature more – while alive – in a full length novel. He’s also rather useful, as a rich and well-connected friend who doesn’t come with the mass of hidden intentions and conflicting loyalties of Cicero and other powerful (and real) people.

Another nice thing about this collection is that it gives us a glimpse of Gordianus, Eco and Bethesda’s life together when they were younger, and even better, both Eco and Bethesda get the chance to solve a mystery themselves. Bethesda, especially, always strikes me as a very underused character in the novels (though she gets a chance to shine – if that’s the right word in the circumstances – every now and again) so it’s lovely to see her get some attention here. It’s also interesting to see how she and Gordianus interact while she is still his slave, since she is absent for much of Arms of Nemesis and freed and married to Gordianus after that. Their interactions fit quite neatly with how I imagine some master/concubine relationships might have functioned, when the master is kind (and single).

The historical content in the stories is as entertaining and as accurate as ever. ‘The Tale of the Treasure House’ suffers somewhat if you know the sources, because it’s lifted almost directly from a story in Herodotus’ best known part of his Histories, his description of Egypt, with just some minor tweaking by Bethesda. Since the change is so minimal, this does make the story rather a lot less interesting when you already know it. The other historical stories, though (‘Death Wears a Mask’, ‘A Will is a Way’, ‘The Alexandrian Cat’ and ‘The House of the Vestals’) are from more obscure bits of sources and are more substantially altered or added to, while ‘Little Caesar and the Pirates’ takes inspiration from history and creates a new story around it. I particularly like the expansion of very brief historical notes in ‘A Will is a Way’, which is very effective. The reamining stories, 'The Lemures', 'The Disappearance of the Saturnalia Silver' and 'King Bee and Honey', are purely fictional, though inspired by bits and pieces of Roman literature and social history.

Saylor includes an excellent Author’s Note at the back of the book, detailing all the sources for the stories. For ‘The House of the Vestals’, he explains that he had to do an enormous amount of legwork tracking down one and two-line references to the incident in question. Luckily for those of us working on this story at the moment, two articles have since been published (in journals that are available on JSTOR, the online journal storage site, even better!) which go through all the references to the case in minute detail, thus saving the rest of us hours of trawling through Cicero and Plutarch. (Also, we now have the ability to do electronic word searches of the texts. Which helps too.) Both articles offer slightly different summaries of the case but they’re in broad agreement, and they highlight a couple of inconsistencies that lead them to different conclusions from Saylor – not that this matters, since a) Saylor’s conclusions are also perfectly reasonable, the whole incident is extremely difficult to reconstruct and b) he’s writing fiction and any changes would easily fall under artistic license anyway. But since I happen to have looked into this recently, it seemed worth bringing it up!

As always with Saylor’s books, I enjoyed this very much. There were a couple of cases in which I worked out the culprit straight away, but the resolution was never quite so clear, so apart from ‘The Tale of the Treasure House’, I was hooked throughout. There’s also something strangely satisfying about reading about Gordianus’ life when he was poorer, when it was just him and Eco and Bethesda, and when Eco was mute – like reading the scenes with the old Watch in Terry Pratchett’s Night Watch, sometimes, when fictional characters make progress, you find yourself wanting to go back to how they were when you first met them. This collection provides a perfect opportunity to do so!