How I Met Your Mother: Desperation Day 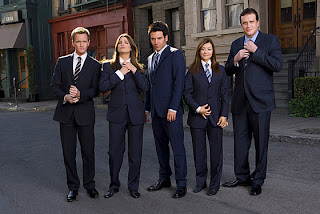 I realise this post is hopelessly wide of the proper time of year, but we only just got to see this episode in the UK! If I wait until next February I'll never remember it.

This is How I Met Your Mother's Season 6 Valentine's Day episode. I watched the first few episodes of the first series and then moved house without my TV, so I've only just recently started getting into the show again. This was a pretty good episode - I especially enjoyed Marshall and Ted's reversion to their teenage years, since they're supposed to be roughly the same age as me and I recognised my old Gameboy and MarioKart obsession, and while we don't go out and pick up random men, my single friends and I have been known to get together on Valentine's Day, usually to watch romantic comedies. Any wearing of purple is accidental though.

The reason I'm blogging it is that Barney's explanation of 'Desperation Day' (February 13th) involves a fantasy Roman-set sequence with the main characters dressed up as Romans. You can tell they're Romans because they're wearing white sheet-type things with leaf-crowns on their heads and Cobie Smulders as Robin even has a go at speaking The Queen's Latin (though since no one else is doing that, it sounds pretty weird).

Now, I know that the object of comic fantasy sequences in How I Met Your Mother is not historical accuracy, but I would be a traitor to my profession if I didn't point out a few salient points. The sequence springs from Barney's statement that 'Weddings were forbidden under Roman law, so St Valentine performed them under threat of death', to which Ted adds, 'That's actually true'.

Does anyone know where this idea comes from? There were a few Valentines mentioned in early Christian matryologies, at least two of whom were supposedly martyred in the third century AD, so Valentine as a Roman makes sense enough. But Valentine's Day as we know it originated in the Middle Ages and the only people who weren't allowed to get married in ancient Rome were slaves. Is this a medieval tradition? Was St Valentine particularly connected with slaves? Is it a random bit of Catholic folklore (though if so, it's not on the Catholic Encyclopedia)? Is it fiction invented for the show (though I think Ted's comment rules that out)? 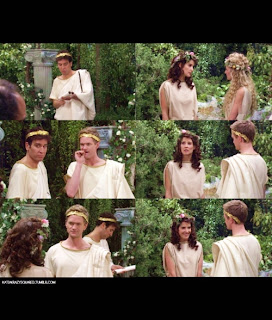 While I'm nit-picking, Romans didn't wear white for weddings, or not all white anyway. Bridal veils were 'flame-coloured' (opinion differs as to exactly which colour is meant by this!).

This was one of those times when I wished I could switch off my inner historian and just watch the show, because while I was staring at the screen mentally yelling 'What? NO!' the dialogue was moving on and was very funny, as Barney said 'Wait! There's more' and Ted put in 'This won't be [true]'. The fantasy sequence was funny too - I kinda love St Desperatius, who probably ought to go make friends with Bilious the Oh God of Hangovers, 'Player, play on' sounds Shakespearian but sort of works because Shakespeare is so well connected with Rome in the popular imagination, and Robin wins the prize for an actually historically accurate joke with her line, 'Fifteen and still unmarried!' (Barney's 'And I thought Pompeii was smoking' is also reasonably historically accurate, but not as funny).

The best resource I could find for St Valentine was the Catholic Encyclopedia which, while obviously biased, is a pretty good reference tool for Late Antiquity, as it usually cites its sources (though 'tradition' broadly means 'not the slightest idea', I think). Please comment if anyone knows of an ancient source that refers to St Valentine, as I'm genuinely perplexed on this one!