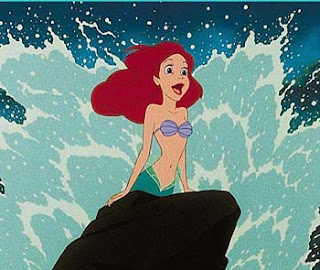 I have Guest Posted over at Three Pipe Problem on Muses and Memory, and I've got a new article on portrayals of Nazis in film at Sound on Sight, do go and take a look!

Today's post is part of the Oceanic Blog-a-Thon Crazy Cris hosts every year for World Oceans Day. Every year I have lots of ideas and never quite find the time to research them properly (i.e. re-read the books!) but hopefully a few nostalgic thoughts on one of my favourite films will fit the bill and provide an 'Oceans' post that's a bit different.

I absolutely adored The Little Mermaid as a child. I had a picture book of the original Hans Christian Anderson story and I knew how Disneyfied the film was, with its sugury sweetness and happy ending, but I didn't care - I loved both. I actually wanted to be a mermaid, which is probably a bit weird, but there you go (I used to make an underwater cave out of my duvet, and I used to lie flat on a swing and pretend to be swimming. You can just have me committed now). Mermaids themselves aren't that common in Classical mythology, though they do appear, and I talked about them in my post on Harry Potter and the Goblet of Fire. But there is one indisputably Classical element in the film, which is Ariel's father Triton the Sea King.

When I was little, I knew that Triton was vaguely Greek or Roman and assumed that he was the Sea God. Of course, as I later discovered, he isn't. The God of the Sea is Poseidon, in Greek, or Neptune, in Latin, the brother of Zeus/Jupiter and Hades/Pluto. Triton, or the tritons, is/are the son or sons of Poseidon/Neptune, a more minor sea divinity or sea creature(s). I suspect there were two main reasons for naming Ariel's father Triton rather than Neptune; the name is more closely related to the three-pronged trident that he wields as a weapon, and more importantly, unlike Neptune, the tritons were sometimes depicted in art as fish-tailed. 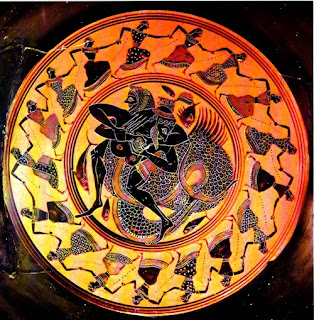 Heracles fights Triton, Greek, 6th century BC
All the underwater creatures in The Little Mermaid are either based on real sea-creatures or are in the traditional mermaid-form of half-human, half-fish (in Ursula's case, half-octopus) so it made more sense for the filmmakers to use Triton, rather than the humanoid god Neptune, as Ariel the mermaid's father. Triton is also thematically linked to the story of The Little Mermaid through music; one story has him drowning a human who challenged him in conch-playing.

The Little Mermaid is one of those stories usually referred to as 'fairy tales' even though technically, they should be called short stories, as they are neither traditional tales with no author, nor stories about fairies (or Faerie, or Fair Folk, or whatever). Hans Christian Anderson's tales and some of Oscar Wilde's, like The Selfish Giant, often get this attribution. I wonder if it's because many of us were read these stories when we were very small, alongside actual fairy tales, and did not know or care about the difference. The Little Mermaid certainly plays with fairy-tale-type creatures and characters, and the use of the Classical, mythological Triton as her father in the film cements her place as a mythy, folky character, accurate or not.

As his father Neptune does in Classical mythology, Triton holds supreme power over the sea, and so does the sea-witch Ursula when she takes his trident and reduces him to a worm-thing. Being the Bad Guy, Ursula is a bit more keen on using this awesome power than Triton himself. She can call up storms and whirlpools at will and is lethal to human beings (unless you manage to drive your boat into her and kill her, a death that seemed a lot more gruesome than I remembered when I watched it back as an adult). This metaphorical representation of the power of the sea, together with the storm from which Ariel rescues Eric early on, introduces child viewers to a very real danger through mythological means. As gorwn-ups and especially the sea-faring ancient Greeks know, the sea is enormously powerful, far more so than any ship. In ancient mythology, Poseidon/Neptune is frequently a metaphor for the simple power and unpredictability of the sea itself, and Triton and Ursula play the same role here. Luckily, this is Disney, and the happy couple are, in the end, confident enough that Triton has given them his blessing to sail off for their honeymoon in a boat... 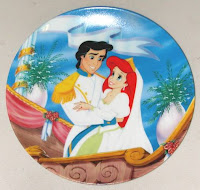