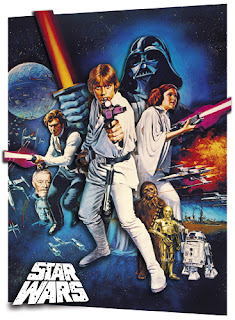 As any of my old friends reading this will be aware, I have been known to express some... opinions... on Star Wars. Fortunately, we're all grown-ups now, and since my idea of making friends no longer involves slagging off Star Wars at length, I no longer feel the need loudly and repeatedly to criticise every aspect of it. The film definitely has merits (including a really satisfyingly happy ending). Some things, however, remain true: I prefer The Lord of the Rings and Star Trek, I still think Episodes IV and V are slightly over-long and dull while I and II are appallingly over-long and dull, and I still think Revenge of the Sith is by far the best of the Star Wars films. It doesn't help, of course, that I've loved LOTR and Star Trek since early childhood, but didn't see Star Wars until I was 16 (and by the way, to all those who saw it as children - weren't you freaked out by the horrific skeleton of Uncle Ben smoking gently in the sunlight?!).

George Lucas claims that the success of Star Wars - perhaps better to say the quality of Star Wars - is partly thanks to its following the mythical pattern of the hero's journey, as laid out by Joseph Campbell. I'm afraid this argument has always mildly irritated me! One reason is that it sounds like a cop-out excuse for how derivative Star Wars is. Obi-Wan is like Gandalf and Merlin because he's a Jungian archetype, apparently - reasoning which protects Lucas from accusations that he's like Gandalf and Merlin because he's based on Gandalf and Merlin. I find Jung's theories, on which Campbell's are based, very interesting, but I don't subscribe to them myself. I think the enduring popularity of myth is fascinating, but more complicated than such a theory allows (though clearly there are universal story elements about sex, parenthood, growing up and so on that have meaning across times and cultures due to our basic biological make-up). I also prefer to defend derivative stories, not because there's something inherently mythic and worthy about them, but because there's nothing wrong with re-telling an old story in your own way. That's what the Greek tragedians did, and it's what Shakespeare did, and the modern obsession with originality is what we should be criticising, not the authors or stories that build on those that have gone before.

While I'm on the subject of universal myths, I don't actually think Star Wars has much in common with ancient myths. Scholars like Jung, Campbell and Claude Levi-Strauss liked to break myths down into constituent parts so tiny, you could relate almost anything to almost anything else. But I'm a Classicist - I don't deal with broad plot outlines, but with individual texts/pictures/films/whatever. And similarities between Star Wars and Greek tragedy or ancient epic poetry are limited. The damsel-in-distress angle, though not unknown in Greek myth (Perseus and Andromeda, for example) is much more common in European folklore. The Wise Old Man is more common in Norse or Arthurian legend (ancient heroes get oracles and advice from friendly deities, quite often female ones, but are otherwise on their own). The young hero yearning for adventure is not a common feature - ancient heroes are more likely to get exiled for accidentally murdering a relative or dress up as girls on the Island of Skyros to avoid 'adventure' (partly because the inevitably of fate and man's helplessness against the gods is often a theme, which doesn't work if your hero is desperate to get out there and start adventuring). Ancient metaphors for coming of age tended more towards sacrificing girls to deities (symbolising the 'death' of the young girl as she becomes a wife and mother) than training montages with fancy weapons.

This is not to say, though, that there are no Classical influences on the films. For one thing, the political system is based on the Senate - which I'll discuss in more detail when I get to the prequels (if I can bear to sit through The Phantom Menace again, and actually pay attention to the politics of it). The word 'Empire' might also bring Rome to mind, though to be honest, I'm not sure something described simply as 'the evil Galactic Empire' can really be mapped onto anything real (and the depiction of it here is much more reminiscent of Nazi Germany, right down to the 'Stormtroopers'). Otherwise, Classical elements in this first film are fairly limited, the ancient world not being terribly big on rebellions. Or spaceships. 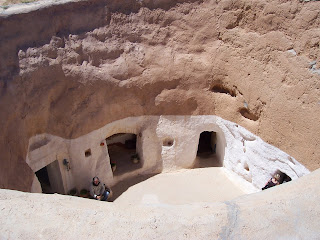 Cave home of the type used for filming Tattooine, in Tunisia
On another subject entirely, the added CGI for the special edition is horrible. Plastic, out of place and not nearly as amusing as Lucas clearly thinks it is.

And why does George Lucas hate arms? Every film, someone loses an arm. Logical I suppose, but you'd think occasionally they'd go for a leg instead.

Now I must go as I've developed a mysterious and inexplicable craving for a Danish pastry...
Camel/Desert pictures Films Mythology Sci-Fi and Fantasy