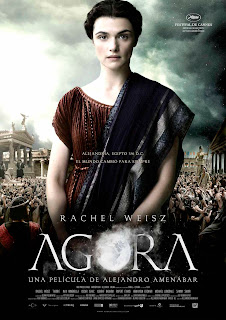 I've been meaning to watch Agora for ages, and finally got around to it this week. It's a very good film, beautifully made and starring one of my favourite actresses, Rachel Weisz.

Older films like Quo Vadis? and Spartacus implied a narrative of the end of the ancient world in which the evil Roman Empire, with all its slavery, blood sport and mad emperors, was brought down by virtuous Christians. This film presents an opposite narrative, in which the wonderful, learned, science-loving ancient world was destroyed by religious and particularly Christian fundamentalism (though the pagans don't come across much better).

My main problem with all these films is that I don't subscribe to either notion. The fall of the Roman Empire and decline of the ancient world were the result of any number of factors, of which Christians were just one (they particularly didn't like bathhouses, theatres or amphitheatres and they converted a lot of the temples to churches). The Eastern Empire, which became the Byzantine Empire, was Christian from AD 312 just like the Western one and lasted until AD 1453.

I also think the broad association of ancient philosophy with modern science, alluded to through the dialogue's  emphasis on inquiry, is a bit problematic. Ancient philosophers certainly discovered some amazing stuff - atoms and so on - but they had no modern scientific method and they made some serious errors thanks to a lack of inquiry (Aristotle, for example, in On Dreams part 2, insisted that when a woman on her period looks into a mirror, it turns blood-coloured. At no point did he bother to ask Mrs Aristotle, or any other woman, whether this was actually true. It's not, guys).

The Library is presented here in the film as the famous Library of Alexandria, where people also worship the god Serapis (sometimes known as Sarapis). Historically speaking, it was the other way around. The Serapeum, a famous and grand temple to Serapis, also housed an annexe of the library, and it was this annexe that was destroyed along with the temple in AD 391 or 392 by Christians, ordered by the local bishop. Exactly when and how the main library was destroyed has been the source of much debate (if you have access to JSTOR, there is an excellent article on this by Robert Bagnall, 'Alexandria: Library of Dreams' in Proceedings of the American Philosophical Society Vol. 146). The main library was probably destroyed during a war in AD 273 under Aurelian, though there may also have been damage done to it during violent periods under Julius Caesar and Caracalla earlier, and Diocletian later. The Christians must have destroyed a significant section when they destroyed the Serapeum, but most of the Library was lost because of more general war and violence.

The film constantly draws parallels between Hypatia's story and the infamous treatment of Galileo Galilei by the Pope in the seventeenth century. The opening, with the shot of the planet Earth from space, followed by numerous images of the surface from the sky or from space, Hypatia's insistence that the stars revolve but will not fall, and the emphasis on astronomy throughout, all call Galileo to mind. At a crucial point of the story, Aristarchus' heliocentric model of the solar system is discussed, and the Christian Davus objects to the idea that the earth moves, while later Hypatia continues to inviestigate the heliocentric model while Davus is asked whether he thinks the Earth is flat by his Christian friends. The constant allusions to Galileo encourage the audience to project events of the film forward, onto Galileo, and from him to more recent controversies concerning modern Christian fundamentalists and Darwin's theory of evolution.

My favourite thing about this film is that is celebrates the achievements of a famous, learned, pagan woman, and those are pretty few and far between. It's possible that there were lots of learned pagan women and we haven't heard of most of them because, since they weren't murdered by mobs, they were of no interest to male writers - it would be nice to think so! But as it is, the number of pagan women whose intellectual lives we know anything about from the ancient world is depressingly small (it includes mostly poets, like Sappho and Sulpicia). We know a little more about some Christian women because Christian writers wrote lives of saints, male and female, and sometimes mentioned women's learning in that context, and we have Perpetua's account from prison before she was condemened to be killed by wild animals in the arena in the early third century, but we don't have all that much from them either. So it's really nice to see a film about one of the few women who has been celebrated as a teacher (Synesius, her pupil who became a bishop, is an historical character).

The film also depicts a Christian preaching the instruction that women should not teach, from the first letter of St Paul to Timothy (1 Timothy 2.12). This letter was accepted into the New Testament somewhere in its formation but we now think it was written by someone other than Paul himself, and it's one of the documents used to argue against women having any position in Christian churches. Orestes' refusal to kneel and exit from the church at that point is rather satisfying.

Surprisingly, the film takes what seemed to me a softer approach when it comes to the true horror of Hypatia's death. Rather than being flayed and stoned by the mob, Davus smothers her, so only her dead body is attacked. It's a powerful and affecting end to Davus' story, and to hers, but it does rather diminish the full horror of what was really done to her. The film also depicts her death as more of a calculated attack by a particular group than the sources, which attribute it to a more generalised mob mentality - both horrific, but I think there is a difference between a conspiracy against one person and an attack by a frenzied mob, and it's interesting that the film goes for the former. 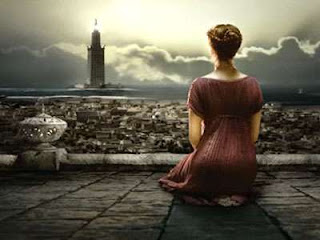 This is a very good film, though I'm afraid Hypatia did annoy me at times - her giving the blood-stained handkerchief to Orestes is just gross and mean and I find the idea that she totally worked out how the solar system is organised right before she died a teensy bit implausible. And the wailing woman on the soundtrack is getting a bit old now. But the film looks absolutely gorgeous, Weisz is very good, and the growing sense of menace, violence and unrest in the city is convincingly and chillingly portrayed.
Egyptology Films Philosophy Roman history