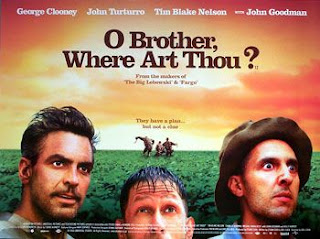 OK, I'm going to have to come right out and confess it; I don't get O Brother Where Art Thou?

I've no objection to the idea, in fact I think it's a great idea. I've a great fondness for stories set in both the American South and during the Depression, so the whole concept really appeals to me. And I have no problem with a free adaptation of a text - I'm quite happy to substitute an overland journey for a nautical one, the chain gang for war, three protagonists for one hero, the police force for Poseidon, and so on.

No, my problem is that I can see very little relation between the film and the text it's supposedly 'based on'. I'm not one of those people who think an adaptation of a novel or, in this case, an epic poem, should be utterly faithful to the text. Film is a different medium and requires different things and I have been known to defend changes made to The Lord of the Rings, The Lion, the Witch and the Wardrobe and other literary adaptations at length. Myth is especially flexible and I think you can and should do all sorts of things with it, as my enduring fondness for Troy will show you. If this film had said it was 'inspired by the adventures of Odysseus', in the same way that Moulin Rouge! is inspired by Orpheus, I wouldn't have batted an eyelid. What confuses me about this film is that it claims to be 'based on The Odyssey'. 'Based on' implies some level of similarity between the two versions, and The Odyssey is a specific text which offers a specific version of the myth. This is what confuses me about the film, which seems to bear very little relation to the poem.

Here are some things The Odyssey is about:

Fathers and sons - the son searching for his father, their reunion, Odysseus' relationship with his own father.
The wife who waited 20 years for her husband, refusing and tricking all other suitors.
Power - Penelope doesn't just preserve her romantic relationship with Odysseus, by refusing to remarry she preserves his throne while Telemachus is young and Odysseus is away.
A long journey full of exciting incidents which Odysseus survives by quick wits and cunning.
The homecoming of a veteran of war .
The high price of war, both in terms of those lost and the results for the survivors.

This is by no means a complete or exhaustive list of what The Odyssey is about, but it covers some of the major themes, I think. Aside from the series of bizarre adventures escaped by quick wits, none of these are obviously present in O Brother Where Art Thou?

Penelope is the strangest thing about this film as an adaptation of The Odyssey. There's nothing wrong with the story of the guy out of prison whose wife has turned her eye to someone else whom she thinks is a better bet, it happens, but it's not The Odyssey. The entire point of Penelope in The Odyssey is that she rejects all suitors and waits for Odysseus to return and reclaim both her and his kingdom. Calling a character 'Penny' and having her about to get married to someone else - but from choice, not from necessity - does not make her the same character, not if the way she behaves is the exact opposite. Perhaps an argument could be made for an exact inversion of the original story if much of the rest of the story remained similar, but it doesn't - this is just the biggest difference out of many. 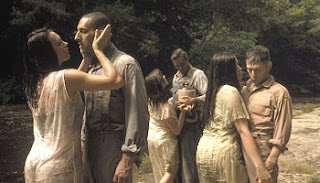 There are a few superficial references to The Odyssey. Ulysses is the Roman name of Odysseus, used by James Joyce in his (equally baffling to me) novel. There's a blind prophet who says he has no name, though in the poem that's a trick of Odysseus' own, and Tiresias certainly has a name. 'A Man of Constant Sorrow' does fit The Odyssey, or it's a good description of Odysseus anyway, the ever-suffering, like a Greek Job. At one point, some beautiful women sitting on rocks entrance the men with their singing in order to bring them to ruin, like sirens (in fact, Delmar calls them sirens). John Goodman plays a one-eyed character, i.e. a Cyclops.

On the other hand, some of the apparent references don't seem to make much sense. The character called Menelaus doesn't appear to bear any relation to Menelaus to me. The character called Homer definitely doesn't bear much relation to Homer. The Cyclops is a Bible salesman, which might be a comment on modern Christians but doesn't seem to have much to do with the myth (unless the idea is that Christians are uncivilised savages who eat people... hmm, maybe I don't want to go there!).

So why claim the story is based on The Odyssey at all? The film opens with the opening lines of the poem, focusing on Odysseus as the wily trickster. Ulysses McGill is, indeed, something of a trickster character and by far the brightest of his little group (which is not saying much). He tells tall tales, like Odysseus does, and uses disguises. However, the trickster is such a common character in literature from across the world that it's a Jungian archetype - one slightly wily lead with a disguise or two does not equal The Odyssey. Perhaps the writers were inspired by The Odyssey, but that doesn't make the final script 'based on' it.

The closest this film gets to The Odyssey for me is in the theme of struggling (and physically journeying) to regain a life that was lost. In this respect, Ulysses really does have something in common with Odysseus. Both have been torn away from home and family and are trying to get back, to recover said wife and family, along with their former social status. In this respect, Ulysses really is a modern Odysseus, and this is probably the film's best claim to be an adaptation of The Odyssey. You could also draw a parallel between Ulysses ruining his friends' lives through his own selfish desire to return home to his wife, and Odysseus inadvertently getting all his men killed, but I think that's reaching a bit far, really, and it works out OK for them in the end anyway.

There is also a very funny scene which directly references The Odyssey, when Delmar thinks the sirens have turned Pete into a toad, just as, in the poem, Circe turns Odysseus' men into pigs. I liked that bit.

I have a few other issues with the film as well, not related to Homer. I just don't get the Coen brothers in general - the only other of their films I've seen is True Grit, which I absolutely love but which is much, much closer to the original text and the only major digression from the novel - the Bear man - is the bit I don't understand and would have cut from the film. Poor Tim Blake-Nelson, an excellent actor, has creeped me out ever since I saw the scene in The Good Girl where he forces Jennifer Aniston to have sex with him, which is hardly fair on my part but does distract me a bit. (It's a testament to his acting skill really - and he's a Classics major, so that's a point in his favour!)

Then there are a lot of cultural references I simply don't get - I have a vague notion George 'Babyface' Nelson is a real bank robber from seeing the Johnny Depp film Public Enemies, and I have a nagging feeling that the singer who sold his soul to the devil at the crossroads is a real character too. Perhaps I'd understand the connections to The Odyssey better if I actually got the American cultural references, but I'm pretty clueless on those. 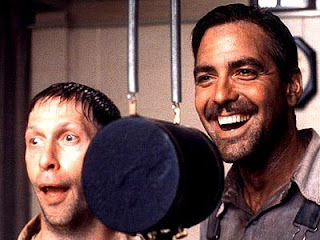 I actually like the film, which is beautifully shot and has a fantastic soundtrack. There's no doubt this is an enjoyable and in many ways fascinating film. It's just that, for me, it doesn't encompass any of what I think of as the central themes of The Odyssey. It's a good bit of film-making, but it's not Homer.
Films Mythology