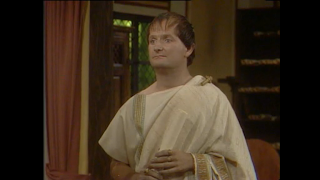 In this episode, Badvok gets an attractive young woman (Enya, presumably named after the famous singer) to pretend to be his sister and seduce Aulus so he can benefit from being the governor's brother-in-law. Unfortunately, not only does she hate Romans, she overcomes this prejudice to fall in love with Grasientus.

The title comes from Catullus' famous poem in which he describes his feelings towards Lesbia and it means 'I hate and I love'. It's very appropriate for Enya's feelings towards Grasientus, and Badvok also uses the narrow line between hate and love to try to convince Aulus that Enya, who hates him, actually loves him. Since Badvok is the one convincing Aulus, there's no direct reference to Catullus' poem, though his description of the emotional state would be a fair reading of it.

The funniest thing about this episode is that the only sex scene in Chelmsford 123 goes to Grasientus, of all people. This is a bit of a recurring theme in British comedy - Rimmer always got laid more often than anyone else on Red Dwarf as well. Since the driving theme behind British sitcoms tends to be that life is unfair and the protagonist is constantly suffering the slings and arrows of outrageous fortune, this is perhaps unsurprising. There's nothing like a truly odious character getting laid while a slightly less unpleasant character remains alone to remind us all that life can be frustrating.

It seems that 4oD now have a YouTube channel, so if you've never seen any Chelmsford 123 and you fancy a look, you can now watch the whole lot on You Tube.
Ancient literature Chelmsford 123 Comedy Roman history TV