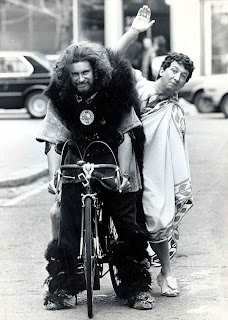 A fun episode of Chelmsford 123, with a rather nice framing device showing a teacher in modern Chelmsford trying to get his pupils enthused about the ancient world (with limited success). The final joke, in which he suggests to his bored class that these people might be their ancestors and the camera pans back to reveal the regular actors in school uniform, is obvious but no less amusing for it.

The schoolroom frame also provides the setup for one of my favourite jokes of the episode, as the teacher shows his class a slide of a bust of Aulus Paulinus with a missing nose. We then fade into Aulus somewhere between AD 123 and AD 127 (for we are told here that these were the years of his governorship), complaining that his new bust doesn't have a nose, because the sculptor (also Chelmsford's resident road builder and rain dance choreographer) can't do noses. Or elephant trunks. The missing nose is such a staple of archaeological finds of busts and statues - because it sticks out, so it comes off more easily - that any alternative explanation to the real but dull and obvious one is a fun idea.

This was a fairly amusing episode overall; I also quite like the bit where the Welsh-sounding merchant Wolfbane offers Badvok honeysuckle scented oil or apricot flapjacks, as the mill/tourist shops of Wales are chock-full of that sort of thing. Of course, the same could also be said of Scotland. And Northern Ireland. And probably the Cotswolds as well... And I enjoyed the bit where Wolfbane (also the resident Druid) brought a pre-killed chicken to a ritual sacrifice. An ex-housemate once told me about a time when she'd had to kill a chicken in her yard and it sounds like a difficult and mildly traumatic job! I'd be all in favour of getting the worst over with beforehand.

The main problem with this episode is that the main plot - in which Aulus and Badvok both think the other is up to something, but it turns out Badvok has just been preparing for a British chieftain competition - doesn't really go anywhere, and isn't terribly engaging. It did give us the opportunity to see Rory McGrath in nothing but a frog-shaped jockstrap, but for that I think it can be blamed, rather than credited.