Treasury of Literature for Children 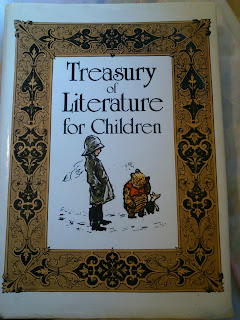 A while back, I posted about an illustrated collection of stories about King Arthur for children, and mentioned that it was one of two illustrated anthologies that were my particular favourites when I was little. This is the other, a collection of sections from children's classics, poems and short stories including things like 'The Smuggler's Song', Oscar Wilde's 'The Selfish Giant' and an extract from Swift's Gulliver's Travels.

The book includes Nathaniel Hawthorne's re-telling of the story of the Labours of Hercules. Hawthorne's version is fine. It's bowdlerised, of course; it skims over Hercules' murder of his wife and children, referring to it vaguely as 'some evil deed'. It uses the Roman names for gods and goddesses, which makes no difference, and it skims some of the Labours themselves, focusing on what Hawthorne presumably considered the more interesting ones - he skips over the Stymphalian birds and the bull in one sentence, but devotes a large section to the Apples of the Hesperides, for example. He also describes the Pillars of Hercules as the Straits of Gibralter, which would help children to understand where they were, but introduces a more modern tone. Overall though, the re-telling is a bit functional, but perfectly fine. 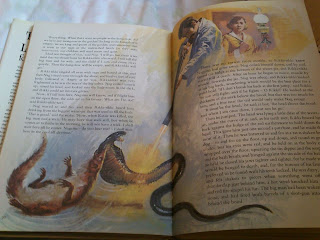 The problem wasn't caused by the illustrations showing unpleasant things, though some of them certainly do, especially the image of the man-eating mares of Diomedes doing what they do best. But one of my absolute favourite stories was Rikki-Tikki-Tavi, from The Jungle Book, which contains some quite frightening images - especially if you're my Mum and you're frightened of snakes. In Rikki-Tikki-Tavi's case, though, although the subject matter is frightening, the style of the illustrations themselves is not. 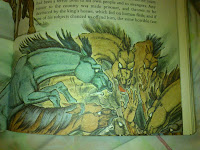 The man-eating mares of Diomedes 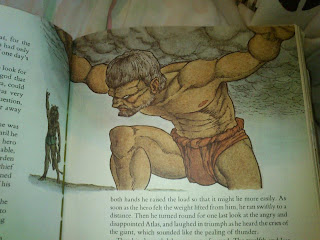 In the case of the Hercules illustrations, however, the illustrations themselves, as well as the subject matter, were rather frightening to me. This picture of Atlas looks rather unnerving, and he has a very peculiar expression. Images of Amazons on wild horses and Hercules himself, wearing his traditional lion-skin and looking small, distant and tough, did not endear me to the story. 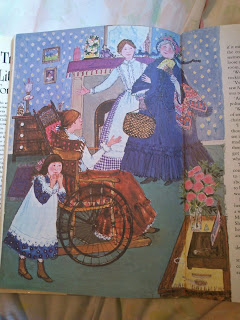 This is not to say that the subject matter is completely irrelevant. Another favourite of mine was What Katy Did, which benefited from cosy, safe illustrations, partly because it's a story about young women set in middle-class drawing rooms.

Illustration for What Katy Did

But I think it was the nature of the Hercules illustrations that put me off - they were too alien, too strange, too cruel and not warm or familiar enough. The cobras in the Rikki-Tikki-Tavi illustrations were alien and scary, but they were balanced by a cute mongoose and presented in a realistic and therefore familiar and comforting way. And this close insight into the workings of my eight-year-old mind is a useful reminder that often, the things we value or consider important are not those a child will - and the impression people get of Classics in popular culture may depend on the most random of elements.
Books Children's Literature Mythology