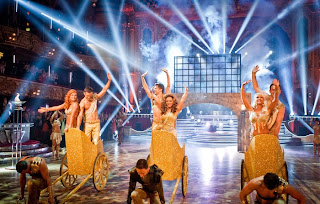 I moved house a couple of weeks ago and just got the internet (and the TV) sorted out in my new flat, so this evening I settled down to, rather belatedly, watch the Strictly Come Dancing Grand Final. After an introductory blurb from Tess comparing the dancers to gladiators lining up for a final confrontation (and set to the soundtrack from Gladiator), for the opening number... well, I think this is better seen than described.

Wow. One of my all-time favourite songs, a Roman theme, and Pasha and Harry with their shirts off. What more could a girl want? Only one question - why is Vincent so thoroughly covered up?! 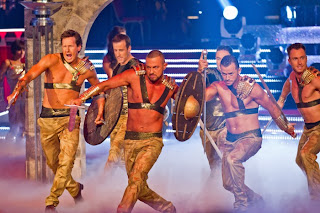 My absolute favourite part of this number is the bit where the guys come in with retiarii nets! They use them like bull-fighting capes in a paso doble and it is weird and ridiculous and completely awesome. We are talking about actual use of Classical archaeology in a ballroom dance number. I love it.

I assume that the main reason the powers that be went for a Classical theme is that it offered a perfect excuse for men and women of whatever orientation to perv over their favourites in bikinis/no tops (myself very much included). It also plays up the show's depiction of its final as an epic battle of course - Strictly has always been keen on playing up this angle, partly to make ballroom dancing seem a bit tougher and more macho, mostly to play up the drama for the TV. I also wondered, as the three couples were pulled on in chariots, if the producers had been reading The Hunger Games, as it was very much like the presentation of the tributes in the first book.

I'm very fond of Strictly, partly because I used to do ballroom dancing as a hobby, partly because it's just good, fun Saturday night TV. Both my Mum and The Artist Formerly Known as CurrentHousemate's Mum were put off by some of the unfortunate exits in previous years (Colin Jackson was robbed. Robbed I tells ya!) but AFKACH and I have been watching all year and it's been a very good year. Apart from Rory Bremner's early exit (there's no way he should have gone before Nancy Dell'Olio) things have gone more or less the way I was hoping, with my perfect three finalists. My first ever album was Kylie and the first pop stars I loved were Kylie Minogue and Jason Donovan, so I loved watching him get to the final, though it was right he went out first. And I could watch Harry Judd dance all day and all night and still not have enough - that man can move. 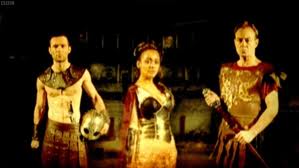