Chelmsford 123: Something Beginning With E 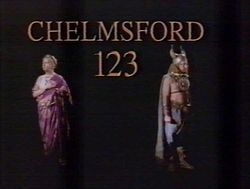 This is the very last episode of Chelmsford 123, and my second favourite, because once again it features some Latin, and it sees the return of pseudo-Emperor Hadrian (I say 'pseudo' because the only thing this guy has in common with the real Emperor Hadrian is that they both have beards). 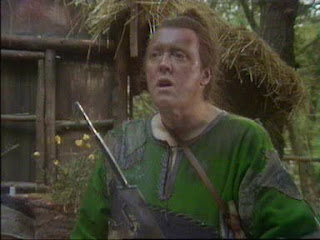 Howard Lew Lewis, who played Blagg - this picture is actually from the  classic childrens' comedy series Maid Marian and her Marry Men, written by and starring Tony Robinson, in which he played the delightfully-named Rabies
Since this is the last ever episode, the writers take advantage of the opportunity to throw in all the Classical jokes they haven't quite managed to find a place for in the series so far. At one point, Aulus wonders how he's offended the gods, since he's never done anything that awful - he's never killed his father or slept with his mother, for example (at this point Mungo chimes in with 'don't knock it till you've tried it'). I like the bit where Aulus and Grasientus discuss the possibilities of throwing Christians to the lions for the Emperor's entertainment, and consider how to solve the problem of the lack of lions in Britain - they decide to try using sheep instead. Aulus delivers a very funny prayer as well, assuring Jupiter that he's his favourite god with half a dozen flattering epithets, which reminds me of the Romans' tendency to call him things like Jupiter Optimus Maximus (Jupiter Best and Greatest), which seems rather redundant.

The Emperor's visit goes predictably badly, as Badvok tries to kidnap the Emperor and hold him hostage for money and freedom, and Aulus wants to leave him with Badvok and go and take over the Empire himself. Both are foiled by the fact the Emperor has swapped clothes with his right hand man in case of just such a plot and we last see our heroes rowing as galley slaves and blaming all their problems on the French. On the bright side, they've done a lot better than the lead characters in most series of Blackadder, but they do seem to have fallen prey to the British fondness for downer endings (this is why I like American sitcoms so much...)

So, that was Chelmsford 123. It's not ever going to get into the Sitcom Hall of Fame, but I enjoyed it when I caught it on UK Gold a few years ago, and I've enjoyed watching it again now. It may a bit obvious, but it's entertaining and I know I will think of it any time I find myself taking a bypass around Romford. The whole series can be viewed from free on 4oD in the UK, so check it out sometime if you're bored and need something to watch with lunch - at the very least, the first and last episodes are much more light-hearted Latin revision opportunities than The Passion of the Christ!