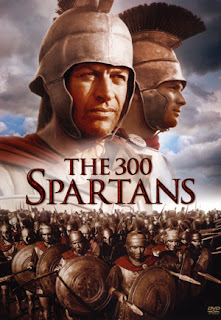 In many ways, The 300 Spartans is a superior film to Zack Snyder's 300. Xerxes isn't seven feet tall, for starters. There are no man-monsters with claws for arms and nearly everyone is fully dressed at all times. It ought to be unquestionably the superior film. The trouble is, it's just... dull. I had to watch it in three sittings, and I was still bored.

In talking about this film, I know I shouldn't compare this to 300, a film that came so much later and that would mean nothing to the makers of The 300 Spartans. I'm afraid I just can't help it - this story and the way it's portrayed is totally bound up with comparisons to 300 for me. I suppose 300 is just one those films that, like it or loathe it, gets permanently stuck in your head once you've seen it.

The 300 Spartans opens with the standard prologue for films of this period. No nasty pagan Romans to be defeated by virtuous Christians here (the Greeks were pagans too, but '50s and '60s filmmakers don't seem so interested in that) - here, we have the other favourite plot, of virtuous democratic Greeks fighting nasty monarchist foreigners. I gotta say, I think claiming the 300 Spartans were fighting for 'our' freedom, as the prologue does, is really pushing it. Since the battle of Thermopylae, that part of the world has been conquered by Macedonia, Rome and Turkey, and I believe it was occupied by Hitler too. I don't think 'we' really benefited from the Greek victory at Thermopylae, except maybe in the fields of philosophy and drama. And medicine. OK, we did quite well out of it - but we didn't gain or lose any freedom, is what I'm saying.

The film opens with Xerxes and the Persians, which is an interesting choice.We see quite a lot of Xerxes and ex-Spartan king Demaratus before we ever get to see more than one actual Spartan, and we hear about them through their reputation before we see them. This makes them seem less self-aggrandizing, which is interesting - these days I think we're all for soldiers knowing their own skill and being proud of it, but these filmmakers perhaps want more modest heroes. Of course, the other reason for opening with Xerxes is for him to show of how eeeeevil he is, by having people killed for his entertainment and so on.

The film has a tendency to fall prey to terrible expository dialogue, especially near the beginning; there are lines like 'so this is the spartan spy', 'you have no single ruler' and so on. I think that in some cases using an actual narrator  is a rather more effective way of delivering exposition when you have this much of it, especially for explaining complex things like the Spartan legal system.

Athens, and indeed the situation of the independent Greek city-states trying to work out how to deal with an attack together, is much better represented here than in 300. The other Greek cities, and Athens in particular, are part of the plot. We even get a reference to the whole famous wooden walls business (in which an oracle foretold that Athens would be saved by wooden walls, and the general Themistocles managed to persuade the Athenians that this meant they should put their strength into their navy). The drawback to this, perhaps, is that the story is less focused, and it seems to be an age before we're finally introduced to Leonidas himself.

There's an increased focus on Leonidas' actual strategy rather than knee-jerk emotional reactions during the set-up, which is both more sensible and makes the Spartans' actions even more noble. They're not reacting blindly to the fact the Persians have upset them, they're giving their lives to create a diversion and buy Athens time to get the navy ready.

There's a rather sweet love story involving a Spartan who gets disgraced because his father defects, then follows the army with his girlfriend until they let him back. Like 300, and indeed like many stories set during wars in which the fighting is happening some distance from people's homes, filmmakers are faced with the problem of how to get some women into the story. There are a couple of other women, including Gorgo, but Ellas, the girlfriend, is the main female character. She's a little bit whiny at times, but the scenes of the young couple break up the military focus a bit, and give character to a Spartan other than Leonidas, so they're not a bad addition. Of course, it's this guy who gets sent back to bring the message that the Persians have broken through from Leonidas before everyone else gets killed, so all ends well for love. Aw. Ellas also gives Ephialtes a new motivation for betraying the Spartans, by whacking him when he comes on to her, which adds to the drama a bit.

And the main problem with this film is just that it's too long on a film on what's actually a fairly flimsy story (Spartans go to Thermopylae; Spartans die. The end!). Xerxes becomes really over-the-top evil after a while, burying people alove, massacring women and so on. His scenes also have a tendency to turn into excuses to show women dancing in bikinis. There's some pretty dodgy acting going on as well (fists waving haplessly around etc). The actual fight sequences aren't bad, but I'm not sure lying down in front of a cavalry charge and holding your shield over your head to protect yourself would actually work. After Leonidas is killed in the final charge and the remaining Spartans refuse to surrender, they're finished off with arrows, which somehow seems evocative of shoot-outs in later war films or Westerns.

Towards the end, as the 300 are about to go into the breach, prophet Aegisthus sees a vision of the Athenians' eventual naval victory at Salamis, which is quite a nice way of telling the audience the end of the war without going beyond the deaths of the 300. It's also rather sweet in that it allows Leonidas to have some sense of the eventual Greek victory and to promise that they will be watching (sniff!). It's not even particularly implausible really - they all know what Themistocles' plan is here, so it's a fair guess anyway. 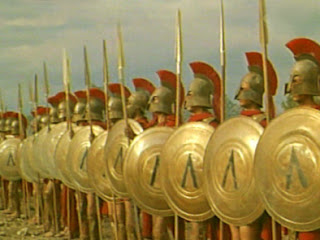 There is some good stuff here. Some of the story just lends itself to cool in any context ('our arrows will blot out the sun;' 'we will fight in the shade then!' and 'tell the Spartans that we are staying here, obedient to their word'). Richard Egan as Leonidas is charismatic and convincing. But the whole thing is at least half an hour too long. The sections with Themistocles are quite satisfying to me, but I don't know if they mean much to viewers who aren't familiar with the history - the film might do better to leave out the wooden walls business and focus more on giving some of the Spartans more developed characters so that we care a bit more when they die. The end is quite effective though, with a final shot of Leonidas' face and the famous epitaph - even the unnecessary voiceover about how the Spartans set such a great example by fighting tyranny can't entirely spoil it.
Films Greek history