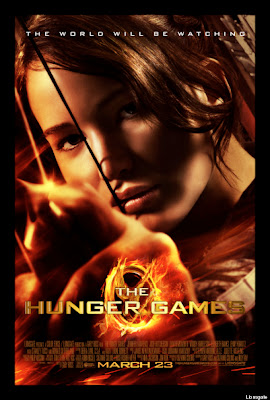 To start with the obvious, Jennifer Lawrence as Katniss is absolutely brilliant. She completely captures Katniss' character from the books while making her a likeable and relatable screen presence (not easy with such an introverted character). Everyone else is great too, especially Woody Harrelson as Haymitch (perfect casting), Lenny Kravitz as Cinna and Stanley Tucci and Toby Jones as Caesar Flickerman and that Claudius guy. Both the boys are good too, and Josh Hutcherson is brilliant at doing Peeta's interview routine, looking effortlessly charming in front of the cameras.

I only have one problem with the casting of the guys. In the books, I always felt that Katniss and Peeta were obviously going to end up together, she clearly fancied him (though she was in denial) and Gale was never really on my radar except when shoved there - his crush on Katniss was the one that always felt one-way to me. But in the film, it seems to me that Liam Hemsworth and Lawrence have much better chemistry than Lawrence and Hutcherson, whose romance feels genuinely fake rather than fake-but-actually-genuine (if that makes any sense at all!). Also, to put it frankly and with no offence meant to the actor, I think Hemsworth is quite a bit sexier than Hutcherson. So that was a little bit problematic for me - I want to root for Katniss and Peeta (I refuse to use the word 'team' in this context) but the movie keeps pushing me towards Gale.

The other reason Gale makes more of an impact in the film, of course, is that we see a bit more of him. Because the film isn't told solely from Katniss' point of view, we see Gale watching her and Peeta in the Games, as well as seeing him again at the end, which goes right up to her return to District 12. For the most part, this adaptation is faithful to the point of being too faithful - I like to see something unique to film in an adaptation, like the staircase sequence in Fellowship of the Ring - something that makes me sit up and take notice because I don't know exactly what's going to happen and how, and something that can only effectively be done on film. Still, in addition to cutting the odd minor character, where the film does make slight alterations it does so very well, using the new medium to expand the story a little bit. So, we see Haymitch trying to get sponsors for Katniss, we see a lot more of President Snow and his threats towards Seneca, we see rioting in District 11. We also get Caesar and Claudius as kings of exposition, explaining what trackerjackers are to the TV audience in a way that feels seamless and natural, while flashbacks to Katniss' past are slotted into the hallucinogenic sequence that follows.

The only change the film makes that isn't basically cosmetic (removing unnecessary characters, moving exposition etc) is a particularly interesting one. At the beginning of the film, Gale tells Katniss that if no one watched the Games, that would be an end to them and at no point does anyone state that watching the Reaping or the Games is mandatory. Unlike in the books, beyond the Capitol, the people in the Districts are not being forced to watch the Games, they choose to. This is quite a different thing, making them at least partly culpable in their childrens' fates and reinforcing the central reality-TV metaphor - we know vulnerable people shouldn't be exploited for entertainment, but as long as we keep watching, it will keep happening. It also makes it much closer to Roman gladiatorial games. No one in ancient Rome was forced to watch people fight to death. They wanted to, indeed, they demanded it. The real culprits, the reason the Games happen, are the people in the audience.

The Roman theme isn't, otherwise, overly emphasised. The Capitol's logo is suitably Roman, heavily featuring a laurel wreath, but for this first film that aspect has been largely played down in favour of Collins' evocative descriptions of the mad fashions in the city. We do actually see Seneca sharing his namesake's fate, being forced to suicide, with an eerie shot of an empty room and a bowlful of berries, and I read an interesting interview with Donald Sutherland where he mentioned that he had looked up Snow's namesake, Coriolanus (his first name isn't yet revealed onscreen, as it doesn't appear until the third book). It will interesting to see if, as the theme of rebellion becomes more important over the next two films, we will start to see a more Roman vibe to the Capitol.

It's more likely that it'll end up looking like the Third Reich - like Harry Potter and the Deathly Hallows, the designer of this film has decided that, for reasons unknown, all tyrannical regimes force their female inhabitants to wear knee-length dresses in bleached out colours, with pigtails on the young girls. They may also line them up in strict formations. I get what they're doing, but when they make an otherwise modern/futuristic society look like Auschwitz for the Reaping scene, it stops being interesting design and becomes an excessively in-your-face, remember the rulers are Bad! motif. Other than that, the films looks great, and I want Katniss' brown leather jacket from the opening section.

This is a Bad situation. The Holocaust was also a Bad situation. Wouldn't it be clever to make this look like the Holocaust? I bet no one's ever done that before!
There's a lot of hand-held camerawork in the film, much of which is quite jerky and occasionally disorientating. At the beginning, I found this very annoying. I wanted to get a sense of what this world is like and feel some kind of stability in the establishing scenes, while still getting to know the characters. The tight focus on Effie during the Reaping was also a little jarring somehow. But during the Games themselves, these techniques really come into their own, because the close-up, jerky, constantly moving camera is able to depict extraordinary levels of violence without actually showing any blood (or very little). We see a sixteen-year-old beating in a thirteen-year-old's head with a rock or stabbing them with a knife, but because we're so tight in, usually on the winner, the camera can avoid all blood and guts and depict the violence without needing any gore. Quite apart from the basic financial fact that a film based on a Young Adult novel has to have a PG-13/12A rating, I actually prefer this approach. I don't actually like gore much (I watch Spartacus in spite of the gore rather than because of it!) and I really liked this method of depicting the horror and violence of the story without needing bucketfuls of fake blood and equally importantly, without glorifying it either.

As always, there were a few moments that were better in my head than on the screen. I thought it strange that we didn't get at least one reasonably passionate kiss between Katniss and Peeta. In the book, the fact that for a split second she stops pretending is really quite important. I could have lived with it being moved, perhaps to the moment where they've won, but they didn't actually interact much after that. The climactic scene with the berries felt slightly underwhelming as well - I wanted to Katniss to really think about killing Peeta, and then I wanted to see her hold the berries up to the camera, the way she saluted it earlier.

Like the book, the ending feels rather muted - I would have amped up some celebrations after their win, before coming down again through Seneca's death and the return to District 12. I think a film needs a bit of soaring emotion at the end - as it is, the strongest emotional scene is Rue's death. The scene where Katniss mourns Rue is brilliantly done and very powerful - again, my only disappointment is her subsequent rush to find Peeta when the rules are changed didn't seem quite as emotional as it felt in the book (I seem to remember her crying out his name in the book in a way she doesn't on screen). Perhaps it feels this way partly because the preceding scene had been so raw (and she does a good blind panic when the cannon goes off for Foxface later). 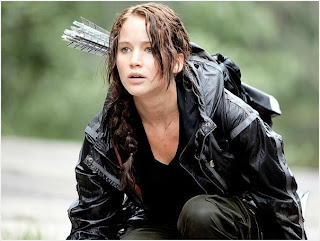 All in all, a brilliant film. I would have liked to see something added that was not directly from the book - I felt a bit like I'd just seen the pictures in my head, on the screen, and not quite right, where I would rather see a fresh-ish version of the story (Jennifer Lawrence's performance excepted, because she looked exactly like the pictures in my head, if not better. Her sheer, pants-wetting terror as she stands with Cinna before entering the Games is extraordinary). But it's a very cinematic book, so this is really a minor niggle. The enormous amount of exposition required is handled brilliantly and all the performances are great. How long do we have to wait for the sequel...?