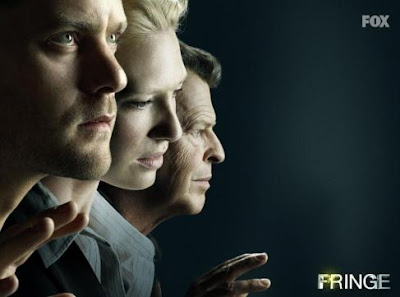 After getting a free DVD boxset when I subscribed to SFX magazine earlier this year, I've been working my way through seasons 2, 3 and 4 of Fringe (just in time to catch it's shortened final season with everyone else next year!). Few sci-fi and fantasy shows can get through three or more seasons without some kind of Classical reference popping up and I was delighted to see that Fringe was no exception.

(Some of this may not make much sense if you haven't seen Fringe. I've been deliberately vague about anything relating to the show's overall story arc, to avoid spoiling too much for anyone who hasn't seen it yet - up until the last paragraph, which is majorly spoilery, so don't read if you don't want to know. The show is worth a look, though it lost me a bit after, ironically, season 4's 'The End of All Things'. The moral here is, even if your cast includes one of the stars of The Lord of the Rings, it's still not a good idea to call an episode 'The End of all Things.')

'Os' is not, it has to be said, an especially good episode of Fringe. For one thing, we all have our personal limits for what we can or can't suspend disbelief for, and where the lines are drawn will depend partly on the nature of the show as well (for example I'll buy things in The X-Files, one of Fringe's obvious foreunners/inspirations, that I won't buy on Fringe, because The X-Files is based on the paranormal, not mad science). People floating around in the air is a bit close to the line for me - plus it looks a bit silly. (This is why the one plotline that totally lost me on this show, which I hope is not going to reappear in season 5, was the Porcupine Man. Utterly daft). The episode is also a bit clunky, and features a reveal at the end that both distracts from the rest of the episode, and means that some fairly significant character development was abruptly dropped and, so far, has yet to reappear.

What I did like about this episode, though, was its use of the myth of Icarus. The story of Daedalus and Icarus is one of the best-known Greco-Roman myths, and probably one of the most frequently referenced behind the all-time number one, Oedipus. Aside from overly obvious spaceship-naming (do not get on a spaceship called Icarus and fly towards the sun - it will not end well for you) the story is usually used to symbolise reaching too far in a quest for artistic or scientific achievement and suffering or even dying for it - 'flying too close to the sun'. Given that Fringe is based almost entirely on scientists destroying themselves and/or others (up to and including entire universes) in their quest for scientific advancement, it's just surprising it took them until season 3 to give the Icarus story a shout-out, really.

At first, it looks like Walter's direct references to the Icarus story in his dialogue are just a rather clunky way of trying to make the story more affecting. Formerly wheelchair-bound young men are becoming weightless, but if they don't stay tethered to the ground they'll float off into the atmosphere, in a literal rendition of the Icarus story - and if your story comes from a myth, this always gives it a level of kudos that stops the audience from saying 'hang on, seriously - floating people?' But then the story's resemblance to the Icarus myth is revealed to be even closer than just the flying thing, and that's where it gets more interesting, tapping into an aspect of the story that is often forgotten when it's reduced to the bare bones of 'don't over-reach or you might get burned'. 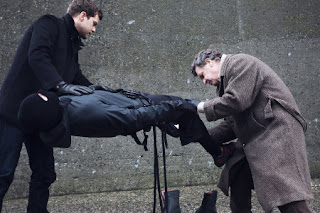 I can't help it - it looks silly. I draw the line in weird places.

Fringe is a show that is obsessed with relationships between fathers and sons and, more specifically, with the lengths to which fathers will go to protect or help their sons. (Other parent/child relationships get a look-in sometimes as well, and mothers and daughters start cropping up a bit in season 4, but fathers and sons is the focus). This is the driving force behind the show's overall mythology and it crops up in another context in season 3's 'The Abducted' and season 4's 'The Consultant' (though it's weirdly and inexplicably absent from the episodes following 'The End of All Things' - another dropped plotline that continues to annoy me!). At the end of 'Os', it's revealed that Stuart from Spin City has been experimenting on wheelchair-bound young men because he wants to help his own son, who is also confined to a wheelchair. It's at this point that Walter brings up Icarus again, not because of the rather obvious flying connection, but because the reason Daedalus built the wings in the first place was because he was trying to help his son, and the attempt backfired horribly.

In myth, the reason Daedalus built the wings was that he was being held prisoner on the island of Crete, and his son with him. He built the wings so that they could escape - so he wasn't just messing around with things we ought not to mess around with for the sake of Science, Art or the Betterment of Humankind, he was trying to achieve a specific goal to help his son (well, to help himself really, but his son too). In Ovid's version in the Metamorphoses, Ovid places an enormous amount of emphasis on Daedalus' love for his son, the tragedy of the boy (he's quite young in this version) getting carried away and killing himself, and Daedalus' grief at his son's death. Ovid then undercuts this by adding that the partridge uttered a cry of triumph, because the partridge was formerly Daedalus' young nephew Perdix, whom Daedalus murdered (except a goddess turned him into a partridge instead). This rather undercuts your sympathy for Daedalus, and implies that the death of Icarus may be the universe's way of restoring the balance after what Daedalus did to Perdix. 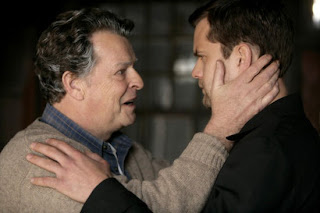 It's this aspect of the story - at least in Ovid's version, which is probably the best known - that really makes it a perfect fit for Fringe. Both Stuart from Spin City and Walter have worked on something to help their own son at the cost of the lives of other people's sons. In myth, Daedalus' callous treatment of someone else's son was balanced by the death of his own son, which is reflected in 'Os' when Stuart from Spin City metaphorically loses his own son as a direct result of his callous treatment of others. All this is, of course, building up to the climax of season 3, in which Walter's son has to die/be wiped out of existence/forced into another timeline/universe/whatever the heck was going on in the season 3 finale, to fix the damage Walter did trying to save him. Walter tells not-Stuart that the wings Daedalus gave Icarus ended up killing the boy anyway - just as his bringing Peter over from the other universe will ultimately 'kill' him. What I like about this is that it goes deeper into the story and pulls out layers from the myth that go beyond the usual 'don't over-reach or you'll get burned' message that gets mentioned so often. I always like it when more obscure or neglected elements of ancient myth are exploited in fresh ways, so for all the flaws in other aspects of the episode (for heaven's sake, just call it a katra already) that one line raised it from pretty bad to vaguely OK.