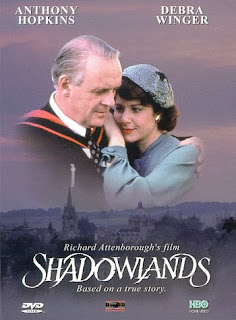 I love Shadowlands, though I don't watch it all that often as it's too depressing! As a biography of CS Lewis, it's a wee bit misleading - as well as factual bits and pieces like the fact that Joy had two sons, not one (and they probably aged a bit over eight years) and that Lewis worked for Cambridge in the 1950s as well as Oxford, the depiction of Lewis as a sexually naive and socially awkward man is, shall we say, not the impression one gets from his autobiography. And Hopkins' performance, though wonderful, mesmerising and all-round brilliant, is fast and frenetic, rather than the slow and thoughtful manner of a man who may have been the inspiration behind Treebeard. None of that matters though, because it's a film, not an historical document, and as a film, it's wonderful (Lewis' stepson Douglas Gresham has also observed that is does a good job of capturing the emotion, if not the facts, of that time).

Appropriately for a biopic of someone who loved Classical literature so much, there are a few Classical references scattered throughout the film. During one of my favourite scenes, in which the wonderful James Frain's Whistler falls asleep in a seminar (I've done that), Lewis is teaching Aristotle's views on character. Some of Aristotle's rules for drama have become accepted an essential to all good fiction (stories should probably have a beginning, middle and end), others less so (unity of time and place is so rare as to be a novelty). This one is somewhere in the middle - Lewis talks about Aristotle's suggestion that the audience/reader should not be told why a character acts in a certain why, but shown it through their actions. Good advice, I suspect. Anything involving Whistler is a highlight in this film - especially his observation to Lewis that 'we read to know we are not alone', which feels very true.

Another scene has Christopher Riley needle Lewis about the soul in Roman terms. I'm sure I once read somewhere that Christopher Riley is a fictional character, a sort of composite of Tolkien (who is noticeably absent, presumably because of his real-life disapproval of Lewis 'strange' marriage, which he wasn't told about until afterwards) and other friends of Lewis' (probably Owen Barfield and Charles Williams, though I can't remember if either of those were atheists). Riley is a staunch atheist who prods Lewis about this intermittently, and at one social gathering he mixes that up with a big old dollup of two thousand-year-old sexism, as he insists that men have intellect (animus) where women have soul (anima). In Latin, both could be roughly translated as 'soul' or 'mind', but animus refers to the rational, logical mind, anima to the emotional. Joy puts him in his place, and very satisfying it is too.

There's one other possible Classical shout-out - when Whistler steals a book from Blackwells (because apparently having access to the entire Bodleian Library isn't enough for him) I could swear he's stealing a Loeb - editions of Classical texts with Latin or Greek on one side and English on the other. This one is red, so it would be Latin. At least he's stealing something interesting. As long as it's not Cicero.

The description of the' shadowlands' of the title given in the film doesn't entirely reflect Lewis' concept of the 'shadowlands', which he sets out in The Last Battle. The idea is related to Plato's myth of the cave, which Lewis had already drawn heavily upon in the climax of The Silver Chair (in which the Witch-Queen of the Underworld tries to convince our heroes that the world above, the sun and Aslan are just a dream). In Plato's Republic, Socrates imagines people watching shadows projected on the wall of a cave, and how dazzled they would be to walk out into the real light. Lewis imagines this Earth (or Narnia) as the cave and shadow-pictures (shadows and dust, Maximus! ahem, sorry), and the afterlife as the real world. The way the idea is brought up in the film makes it sound more like a 'grass is always greener' sort of problem, or a statement about how you never know what's round the corner (it's mentioned immediately before Joy collapses and is diagnosed with cancer). Lewis' idea is a little bit deeper than that, though for the most part his ideas on grief and suffering are well represented in the film.

This conversation, by the way, is also one of several points in the film where someone observes that when Lewis asks a question, he already has the answer waiting - that's what a life of academic teaching will do to you I'm afraid.

Towards the end of the film, the couple go to Herefordshire, which is another minor alteration. In real life, they went to Greece a few months before Joy died. It's an interesting change. It's mainly aesthetic - the film is so British it hurts. But the shift in scene and the introduction of the idea that the young Jack thought the valley they visit was heaven generates a rather simpler view of 'heaven' than Lewis usually described (it actually seems more like one of the simple hobbit pleasures Tolkien was so keen on). This image of heaven being in a wet English valley is more like a reader's or filmmakers' view of Narnia, the element of Narnia that is Northern Ireland writ big. But the real Lewis chose to go to Greece, the only time he left the UK except to fight in France in World War One. Greece is a land of pagan wonder, of ancient mysteries and stories that are as difficult as they are fascinating. Greece is closer to the Narnia that's filled with Roman woodland spirits and pagan gods of ecstasy, the Narnia that tends to be played down or edited out of cinematic or televisual interpretations. That would have been a rather different scene in the film, with a very different tone. 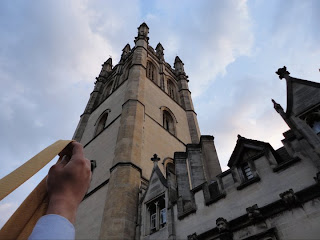 Shadowlands is a beautiful film and well worth seeing. It's also an excellent advert for Oxford as a tourist destination (I've been to hear the May morning singing in Oxford, which is great fun, albeit noisy, crowded and full of very drunk undergraduates who've been up all night. And they block off the edges of the bridge to stop people jumping off it, as the river isn't actually very deep there). The performances are uniformly excellent, especially Hopkins and Frain - and thanks to imdb, I've just discovered that the kid is Timmy from Jurassic Park, so that's one mystery that's been bothering me for years cleared up. Just make sure you have a big box of tissues to hand for the end. 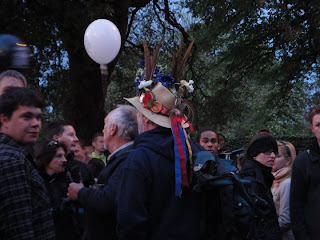 Images from the May morning singing, 2011 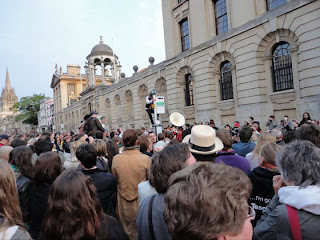