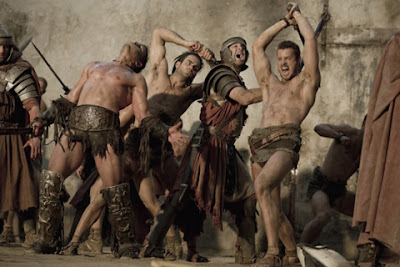 I have a new article up at Den of Geek - the time loop episodes article I mentioned a few days ago.

Ancient warfare is a difficult thing to represent on screen. Hoplite warfare in particular, which consisted largely of pushing and shoving, does not work cinematically (in one battle scene in 300, they give it a good go for a minute or two before saying to heck with it and going into comic-book-style slo-mo). And a good battle scene is quite hard to do under any circumstances, needing a combination of close action featuring our heroes and villains and sweeping shots of the battle as a whole (see for example every battle scene in The Lord of the Rings).

Military history is very much not my area, so these have not been chosen for their fidelity to ancient battle tactics. Nor have they been chosen necessarily for artistic merit or violence level - I'm not that into gore or screen violence. I like scenes that surprise me or that feature powerful character development, or a fresh angle on an old trope, or something like that. Or that just end with one army turning into a pile of dust. Whatever.

5. 300 Spartans vs the Persian Army and a Frickin' Huge Rhino, 300
Are we talking World War Three here? On the Greek side, obviously not, there are just 300 Spartans and some random Athenians (that being kind of the point). On the Persian side, though, we've got a huge army representing the biggest empire in the Western/Near Eastern world, so the label might apply. World War 0.5, perhaps.
Swords or pistols? Swords, arrows, Frickin' Huge Rhino.
Bloodless carnage? Definitely not.
Do the goodies win? Define 'win'... Technically our Greek heroes lose, but although the battle is lost, the war is eventually won.
Makes the list because... The battle sequences in 300 are deliberately ridiculous, spraying blood everywhere to ape the graphic novel images, showing grown men running around in their underpants, and let us not speak of the guy with the claws. But two moments stand out as being pretty awesome. One is the moment when, having quoted the phrase attributed to Leonidas by Plutarch (on being told the Persians had so many arrows they blotted out the sun, he replied, 'that's nice, we'll fight them in the shade' - from Sayings of Spartans) as the Persian arrows come flying at them, our heroes just crouch under their big shields and have a rest. But top prize goes to the Frickin' Huge Rhino that one of our guys shoots in the eye so it slides to the ground at his feet. Totally unhistorical I'm sure, utterly daft and probably implausible, but you gotta love it. It's a Frickin' Huge Rhino for crying out loud!

4. The Magi vs the Army of Anubis, The Mummy Returns
Are we talking World War Three here? The entire world is indeed at stake. Literally.
Swords or pistols? Magi with swords against... whatever it was the army of Anubis was wielding. More swords and jackal teeth, probably.
Bloodless carnage? The film's PG-13, so yes. Oded Fehr gets attractively dusty, that's about it.
Do the goodies win? Yes.
Makes the list because... OK, this battle is daft, tame and not particularly interestingly filmed. But it makes the list for two great moments. There's the fantastic 'oh shit' moment when, having defeated one wave of CGI bad guys, a much bigger wave appears over the sand dune (it's pretty similar to Theoden's face when he sees the oliphaunts). And the glorious ending, as the army of Anubis blows away into dust just at the moment they were about to make contact with Oded Fehr and his thin black line of surviving Magi. It's corny, it's cheesy, it's daft; I love it. 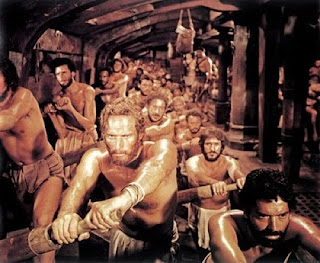 3. Romans vs Pirates, Ben-Hur (1959)
Are we talking World War Three here? Not really, though it's a fairly big naval battle.
Swords or pistols? Ships. And some swords I think, but it's the ship-ramming that sticks in the mind.
Bloodless carnage? Mostly. There's some artful blood smeared on the survivors' gleaming bodies.
Do the goodies win? It looks bad at first, but the Romans prevail in the end.
Makes the list because... It was a bit of a toss-up between this version and the silent 1925 one. The 1925 version has a shot of a Roman prisoner tied to the top of the ship's battering ram while they're ramming the Roman ship, screaming as he's rowed towards oblivion. It's pretty cool. But the 1959 version is just so well done, creating a tense, exciting sequence, the most terrifying moment of which has to be the increasingly fast rhythm of the drummer and the cry 'ramming speed!'

2. The Slaves vs the Masters, Spartacus: Blood and Sand, 'Kill Them All'
Are we talking World War Three here? No, just one rebellion in one ludus, but it would lead to a two-year war between an increasingly large slave-led army and the Roman army, so it's a pretty big deal.
Swords or pistols? Anything that comes to hand, really. But there are quite a few swords involved.
Bloodless carnage? I don't remember anyone's face getting smashed in, so by Spartacus' standards it's almost tame... No, not really, it's majorly bloody.
Do the goodies win? Define 'goodies'... (Crixus stabs a pregnant woman in the stomach. There are no white hats here).
Makes the list because... Spartacus was going to have to do something pretty epic in its season one finale to top 12 episodes of carnage, and it succeeds. Flashing between the immediate build-up to the battle and the planning stages a few days before until it's time to go all out and ending with our 'heroes' walking, bloody and determined, away from the ludus while Batiatus lies dying inside, this provides the spectacular burst of violence we'd been waiting all season for.

1. Romans vs Germans, Gladiator
Are we talking World War Three here? No, though it's implied this battle brings a 20-year on-and-off war to an end, which is quite something.
Swords or pistols? Swords and flaming arrows.
Bloodless carnage? No, though it's lacking the chopping-people-in-half shenanigans of the later gladiatorial combat.
Do the goodies win? Assuming the Romans are goodies, yes.
Makes the list because... After launching into frenetic, hand-held camerawork and close-up fighting scenes and seeing Maximus nearly kill one of his own men by mistake, as the battle rages on, the fight is slowed down and the music switches to a lyrical piece (I think it might be a waltz). Some might call it cheesy, but I love this scene and the slo-mo bit really makes it for me. That's the moment where the film reaches for a bigger emotional wallop, rather than just showing us men chopping each other up for ten minutes. It's the moment I fell in love with the film. 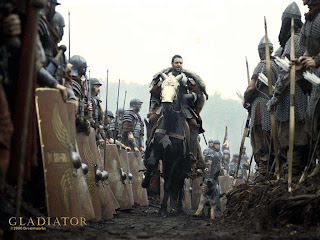 And the worst... I find the battle scene in Spartacus rather slow and dull, but the random pinky-red scene when Alexander is shot in Alexander probably takes it.