Xena Warrior Princess: Been There, Done That 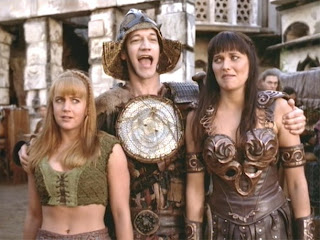 I was writing an article on time loop episodes the other day, so I dug out this season three Xena episode, in which Xena is forced to live the same day over and over and over again, while everyone around her remains blissfully unaware of what's happening.

Although they've been around longer than the film (TNG's 'Cause and Effect' predates it by a year) these episodes are often known as 'Groundhog Day episodes' and the SG-1 classic episode 'Window of Opportunity' gives the film a shout-out. Xena, however, is actually closer to the plot of Groundhog Day than most, something it's able to pull off because of the pseudo-Classical setting.

Groundhog Day never explains exactly what was causing Phil Connors to repeat the day over and over until he got it right, though I can't help feeling some kind of morally or romantically inclined deity would be the only possible explanation. A few TV shows might be able to get away with an unexplained plot of that type - Quantum Leap, of course, and The X-Files could do a beautiful, tragic time loop episode ('Monday') with no explanation because it was all about unexplained phenomena. Most shows, though, can only get away with this sort of inexplicable mysticism once or twice, and for the sake a major and usually quite soppy plot point (magic snowfalls in California, people popping in and out of existence, that sort of thing). When it comes to a fairly standard plot of the week, there usually needs to be some kind of pseudo-scientific or show-logic-based reason for it (a spell, if it's that kind of show) with an accompanying, logical reason why whichever specific characters are able to remember the loop (if any) remember it.

Xena, however, is a show based on ancient mythology. Ancient mythology is largely driven by the actions of gods, and gods can do whatever they like! So Xena is able to ape Groundhog Day much more closely than most shows, though it provides a more logical and solid explanation for events than the film does. The female half of a young Romeo and Juliet-style couple (named Hermia, to carry on the Shakespearean theme) will die tomorrow, but Cupid agrees to let the young man live 'today' over and over again until a hero comes to put things right. Ancient Cupid wasn't in the habit of granting wishes so much as destroying people's lives by throwing his arrows around, but the logic of it works perfectly well (though we are sadly denied an appearance from Cupid himself).

Cupid's offscreen role as a plot device is the only substantial Classical reference in this episode. There's a wonderful moment where the young man says he didn't realise Xena was the hero sent to put things right because he was expecting a 'Hercules, or Sinbad' - which, anachronistic sailors aside, is a perfectly exasperating bit of potentially ancient sexism. When Gabrielle is wondering why the two 'houses' are in the middle of a feud she mentions that they both worship the same god, showing the usual lack of acknowledgement of the nature of ancient religion (everyone worshiped lots of gods so the chances of a religious feud - at least as bad as this one - were fairly slim, though it wasn't impossible). Mostly, both plot and tone are inspired by Shakespeare, mixed in with the show's usual pan-global, vaguely medieval aesthetic.

The episode is played as a broad comedy which mostly works, except that the tone sits oddly with the scenes where one main character after another drops dead. And although I don't like Joxer much, the moment where Xena actually kills him seems to be going a bit far, especially as she doesn't yet know what's causing the loop and therefore can't guarantee that it won't stick. As far as I can remember, I'm pretty sure Phil Connors only deliberately killed himself on his loops, and on SG-1, even when he knew he would loop again, the most drastic thing O'Neill did was resign and kiss Carter, which would be embarrassing but not fatal if the loop were to be unexpectedly broken. Because the episode so resolutely refuses to take itself seriously, it's impossible to take any of the characters' emotions or reactions seriously either. Having said that, Xena's slow breakdown and Gabrielle and Joxer's reactions as she starts to lose it completely are both funny and make perfect sense. And the loop where she kills the rooster is strangely satisfying. 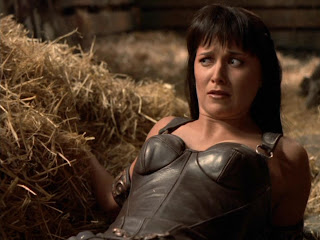 Disclaimer: The rooster was not harmed during the production of this motion picture, although his feathers were severely ruffled. However, a little gel and mousse straightened out the mess.