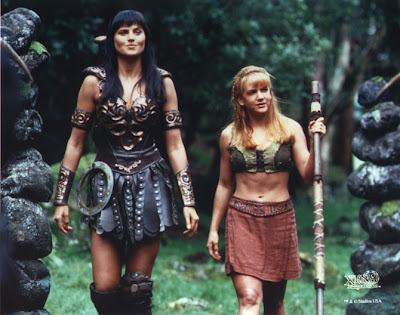 I've been meaning to catch the musical episode of Xena, 'The Bitter Suite', for ages, since it's so well known and has had quite an impact on genre television. When the Internet suggested it was more or less the second part of a two-parter, with this as the first, I figured I'd better watch this one before watching the musical.

My goodness, that was depressing. This flippin' musical had better be worth it!

See, I'm an old-fashioned girl. I like my stories to follow certain narrative rules. No one dies without there being some purpose to it (unless it's a World War One story), the dog always escapes while the rest of New York burns, and you never kill the baby. Or the offspring, of whatever age, of any of your principal characters. This is why I've never watched Trainspotting. There are exceptions - I'm weirdly fond of Star Trek III: The Search for Spock, probably because the revival of Spock compensates emotionally for the offing of Kirk's son. But for the most part - keep the kids(/grown-up offspring) alive.

Of course, poor Solon was doomed from the moment Xena said he could come with her, since these shows have to maintain the status quo. It's a shame, as he was pretty likeable and it might actually have been interesting to shake up the cast dynamics with a teen. It's also interesting that Xena obviously got to the evil-child idea and the bad guy quoting vaguely Biblical sounding phrases ('my father's kingdom is at hand') years before Joss Whedon went anywhere near them. I guess that hideous Jasmine-storyline in Angel is, ultimately, Xena's fault.

On the subject of children, this episode also saw the return of the woman who gave birth to a half-baby, half-foal, which will never stop looking ridiculous. And centaurs apparently grow as unnaturally quickly as Evil Babies, Miracle Babies, Alien-Implant Babies etc. Or possibly, to be fair, as fast as horses. Xena leaving her son with a centaur to raise him is very Greek-myth-appropriate; Chiron was practically running a nursery of budding Greek heroes.

The various Gimmicks of Plot in this episode end up prodding Gabrielle to kill her own daughter (something to do with the child being inherently evil from some earlier episode I haven't seen). This is a recurring subject from Greek myth that I've been thinking about a bit lately because one of my students is writing an essay on it - thank you to Rachel for most of what I'm about to talk about! Usually, parents will kill their own children for one of two reasons. One: the father kills his child/children because of the gods - Agamemnon sacrifices his daughter under orders, Heracles is driven mad by Hera (I think that got a reference early on in the episode actually). There's an interesting parallel there with the story of Abraham and Isaac, in which Abraham has to be willing to kill Isaac on God's orders, but ultimately is spared having to do so. Two: the mother kills her children as an act of revenge against their father (Medea, Procne). (There's a third category, groups of children who are sacrificed, but this post is long enough already. I'll save that for when I get around to doing Doctor Who's 'The Horns of Nimon'). This is one of those Greek horror stories designed to get the biggest cringe of disgust out of the audience (see also: Oedipus) as a parent killing their own child is often thought to be one of the worst crimes imaginable.

(This sort of child-killing is distinct from the infanticide of very young babies by exposure, which was common in both myth and reality in the ancient world - there's usually some sort of ceremony to accept a child into the community, after which it's murder to kill the child. Also, newborns are usually exposed, not stabbed/throats cut/chopped up and fed to their father etc. It makes a difference - exposed children might be rescued by someone who can afford to raise them or keep them as a slave).

Thing is, I suspect these particular Greek myths stem from most of the myth-makers - poets, pot-painters, sculptors - being men who somehow thought it was plausible that a woman would be so angry with her husband, she would murder her own children just to spite him. Notice (as Rachel pointed out to me the other day) the men are never the ones choosing to kill their children, only the women. By contrast, the modern crime of familicide not only includes both partner and children and has completely different motivations, but is also more commonly (though not exclusively) committed by men. In sum: the ancient Greeks were rather sexist and didn't understand women.

Science fiction and fantasy also occasionally plays with this plot, as way of torturing its main characters as much as humanly possible. Generally, it will go for the first version - substitute evil aliens/weird technology for the gods, and you've got Torchwood: Children of Earth. More often, the situation will be more of an Abraham and Isaac story (e.g. Fringe, 'The Firefly' and others), because a) it's less depressing and b) there's a part of you that can never quite forgive a character who kills their own offspring, because it's such a horrific thing to do. Well, there's a part of me, anyway. Whatever mortal danger the planet was in at the time, I still prefer to pretend Children of Earth never happened.

Ultimately, whether or not this kind of story works depends on whether you want people to sympathise with your murderous character and whether you come up with a good enough reason for them to do something so awful. I'm not sure I can quite get behind Gabrielle's reason - however guilty she felt, I can't help thinking the big mistake was sending the potentially evil child to hang out with Solon by herself. Just supervise her better, Gabrielle! But then, I haven't seen the episode that explains the origins of Evil Baby, so maybe that would make a difference. More pressing is the problem that I can't see how Xena could ever forgive Gabrielle for inadvertently causing the death of her son. This musical has a lot of work to do. 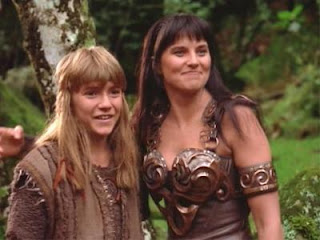 (Oh yeah, Callisto was in this episode too. She and Xena yelled at each other about their respective pain. A lot of rocks fell on her head.)

Hope: They'll kill what they love most... their children. How very Greek.

Xena: Unless the impossible's happened she's trapped for good. This is the trouble with living in mystical myth-time - you never get to watch TV, so you can never become genre savvy

Disclaimer: Xena and Gabrielle's relationship was harmed during the production of this motion picture.