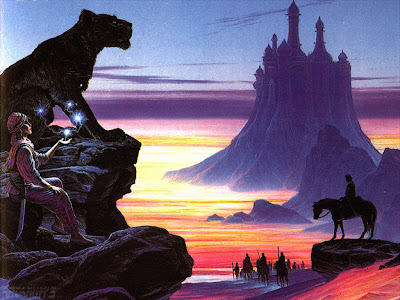 Aurian is the first of four novels in Maggie Furey's The Artefacts of Power series. I read all four as a teenager and I re-read Aurian recently as I was working on gladiatorial combats in speculative fiction.

As a novel, Aurian has its faults. The language is rather forced - for example, using words like 'babe' instead of 'baby' which always sounds faintly ridiculous to me, especially if the novel as a whole isn't written in particularly archaic language. More problematically, the heroine, Aurian herself, is pure Mary Sue. Her only faults are stubbornness and pride, which aren't that terrible as faults, she's brilliant at absolutely everything (a great warrior and one of few Mages whose powers cover all of four key areas) and everyone loves her. The male lead Anvar's grovelling affection for her when working as her servant, in which the narrative repeatedly refers to his concern for 'his Lady' instead of just 'Aurian', is particularly irritating and almost creepy.

However, the novels are impressively fast-moving and feature a huge cast of mostly likable characters (I keep thinking they'd make a really good TV series, with so many characters and locations and a high body count and harsh Anyone Can Die policy as well). They also include some beautiful imagery. I was sucked in on the first page, in which the young Aurian is juggling blue fireballs for fun, and towards the end of the first novel our heroes are forced to cross the Glittering Desert, a huge desert made up of gem-dust and gem stones instead of sand, that shines too brightly to look at by day. I absolutely loved this idea, which is also behind the beautiful cover art. And aside from everyone loving Aurian, the character relationships are reasonably interesting, and shaken up by a genius bit of romantic angst in the fourth novel that my teenage imagination was thoroughly captured by.

The reason I was re-reading it is that, as is fairly common in fantasy novels, Aurian is at one point forced to fight in a gladiatorial arena clearly modelled after the Roman version (while Anvar works as a slave in an environment that sounds like a cross between the popular idea of ancient Egyptian pyramid building and the opening scene of Spartacus). Aurian's gladiatorial combat is fairly typical - she fights various opponents, she eventually teams up with one of them, her life is spared by the prince who takes her off to be his concubine, the usual stuff - but includes a couple of nice inversions. Her final opponent is a big black panther. Conveniently, Aurian has the ability to communicate telepathically with animals, and it's the panther she's able to befriend (after killing several humans - there's a running theme in this book in which Aurian values the lives of animals over those of humans). So, instead of fighting the wild animal, she teams up with it. She also faces a retiarius (a fighter with a net and spear), as all popular culture gladiators must, but rather than one fighter with two weapons, here she faces two men, one with a net and the other with a spear, working together. It's a fresh take on an old idea and an exciting scene - over the course of the novels, Furey includes several increasingly gory set-pieces, and this scene, which doesn't occur until Chapter 23 of the first book, is the first of these. It's a sign of things to come.

Aurian is, ultimately, a fairly standard sword and sourcery novel, but it's good fun and worth a read on a rainy afternoon. And I'm starting the campaign for a TV series here - it could be the next Game of Thrones, I'm sure!