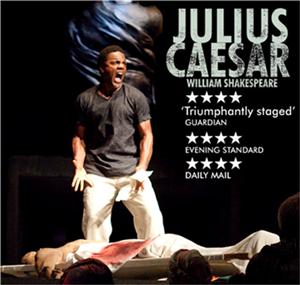 I've blogged Shakespeare's Julius Caesar before - twice so far! So I won't talk much about the play here, as I think I covered the main points when I reviewed the 1953 film version. This is a specially-filmed TV version shown on BBC4 of the production currently playing at the RSC in Stratford-upon-Avon and touring from early July.

This is a modern-dress production, but it's more than that. This version hasn't just changed the costumes, it's moved the story to contemporary Africa, with an entirely black cast speaking in accents that are recognisably African (I'm afraid I'm not familiar enough with the area to be more precise than that, but I do know in most cases these aren't the actors' natural accents). Shakespeare's language and dialogue is used, so the story is set in a fictional African state called 'Rome', but otherwise it's been reconfigured as a modern story.

I like modern dress versions of Shakespeare, though when the play is a history play, I think they can be a bit problematic sometimes - I mentioned in my review of Coriolanus that the plot didn't make quite so much sense in a world with television. This particular transition works very well though. The conspirators' anxiety about becoming (metaphorically) 'slaves' has a resonance Shakespeare couldn't have predicted in this setting and the soothsayer perhaps works better than he has for centuries. I know very little about African religion, witch-doctors and so on and I have no idea if the white body paint on the soothsayer represents a specific real-life practice, but the image of the African shamanistic figure has a feeling of reality to it (by which I mean it represents a very real and sometimes dangerous practice, if not the actual supernatural) that the image of the old Roman soothsayer hasn't carried with it for years. The issue of fighting for democracy against a dictator is, of course, relevant and appropriate (it might have been even more so if the play had been set in Arab North Africa rather than black sub-Saharan Africa).

I did find myself getting mildly irritated at the some of the promotional material though. The play was introduced by the TV announcer and is advertised by the RSC as a 'political thriller' (which it is, but it's not just that) and there seems to be a reluctance to mention the fact it's actually about Romans. Shakespearean scholars, directors, actors and promoters are always terribly anxious to assure audiences that the plays are 'just as relevant now as they were then' and are about 'timeless themes', the implication being that something specific to its historical context is of no interest. I can see their point, but sometimes I think they take it too far. Julius Caesar is about historical people who really lived (even more so than Coriolanus, whose characters are legendary). The fact that they lived 2000 years ago doesn't make their lives or actions any less interesting or 'relevant', but I'm not convinced moving their story completely out of context is the way to tell people that. Treating them like a myth or a poem, a 'timeless' story that you can move around at will seems somehow to detract from the fact that these were real people, who really did these things (more or less!) and although we're a long way removed from them, the course of history wouldn't be the same without them.

I suppose the essential problem is, in their desperate attempt to defend the significance of their own discipline, the Shakespeareans tend to implicitly play down the importance of mine. I don't think stripping something of its context automatically makes it easier to understand - in fact, over years of church-going, I've noticed that the more I know about the historical context of Roman provincial parables, the better I understand them. Studying history in its historical context does not make it less interesting or relevant - for me, it makes it more so, as you can get a much fuller understanding of the significance of the story.

Thisversion is a slightly odd hybrid of filmed stage play and TV adaptation. Most of it is filmed for the television, and takes advantage of that in all the usual ways. There are dramatic images of Caesar spitting out blood through the glass of an escalator, Cassius addressing the camera in a mirror and certain sections of monologues given in voice-over as internal dialogue. It also has all the usual problems of TV adaptations - it's as indoor-set-bound as I, Claudius ever was and there's a distinct lack of... people. The crowd scenes, rather than being filmed for the television, are shot directly at the stage production, which is a bit jarring, as the sound quality suddenly decreases and you can see the audience in the background. This is especially problematic at the very end, as Octavian switches in mid-sentence from the dingy stairwell in which Brutus has just met his end to the stage, a very odd decision. It might have been better to use I, Claudius' old trick of having an invisible crowd behind the camera, though with modern fancy camerawork that might look rather strange. 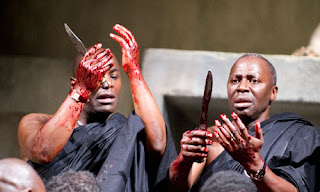 This is a very good production - the performances are great, especially the ever-wonderful onetime Marquis de Carabas, Paterson Joseph, as Brutus, Adjoa Andoh as Portia and Ray Fearon as Mark Antony. There's no denying some images have a particular potency in their modern context, especially the grainy mobile-phone footage of the lynching of Cinna the poet and the bag-over-head brutality of the execution of those condemned under the proscriptions. And I'm really glad to see productions like this, as I can't afford to go to the theatre much and this is the only way to see some of these great productions. I heard on the radio the other day that there'll be some new TV productions of some of the medieval history plays coming out soon, and I'm looking forward to those - on TV is definitely the only I'm going to be able to see the entire Henrys cycle! It makes me quite proud to work for the OU, who are partly behind this, as this is exactly the sort of thing they should be doing, I think. As stilted as filmed stage productions can sometimes seem, it's better than nothing at all!