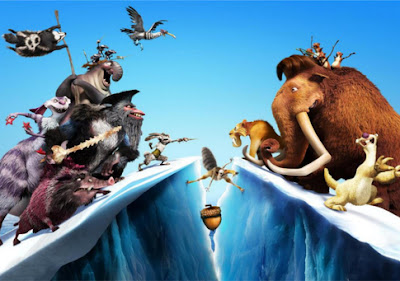 We went to see this film the other day almost by accident. There was hardly anything on, we'd already seen Abraham Lincoln: Vampire Hunter, our love for Doctor Who and mine for Mickey Smith couldn't quite overcome our sense of apathy towards Storage 24 and although I really want to see it, Brother did not fancy Friends With Kids at all (my friends have kids, his don't!). So I swallowed my concerns about not having seen Ice Ages 1-3 (I was in a room while one of them was playing once, but was paying so little attention I have no idea which one it was) and off we went to be entertained by a mad squirrel-thing for 94 minutes. And to my great surprise and delight, it turned out to have random Greek stuff in it!

Ice Age 4 plays with various jokes and tropes surrounding pirate movies and films about the sea more generally. The 'ships' in this case are big hunks of ice or icebergs, moulded into ship-shape (the shape of a ship, that is. I'm not going to bother wondering how prehistoric animals came up with a design based on a sailing ship that wouldn't be invented for centuries. Just go with it). Our heroes come up against a band of pirates led by a monkey/ape/prehistoric simian with really bad teeth. Hijinks ensue. (Brother did not know said pirate captain was voiced by the ever-awesome Peter Dinklage and therefore did not have my problem of being constantly distracted by mentally picturing Tyrion Lannister ordering a sabre-toothed tiger and an army of chipmunks around).

Where there are ships and pirates and fantasy, there will be Sirens - and indeed there were! As usual, these were only tangentially limited to Homeric Sirens, who lure sailors in with their voices (not their looks) aiming to wreck the ship. These are popular culture Sirens, who lure sailors in visually using their sexuality. Sure, there was some ooo-y music going on in the background and I think I remember Manny the mammoth blocking his ears up a la Odysseus, but it was the visual appearance that was really pulling people in. These were also Red Dwarf-variety Sirens, as they took on the appearance of whatever each individual found most attractive. I was hoping their real appearance would be strange winged women/bird-creatures, as on Greek vases, but they turned out to be more lizard-type things that ate their prey. That fitted in much better with the visuals of the rest of the film though (I wonder if confused kids will now think lizard-sirens are an extinct species from the Ice Age...).

Ancient Greece turned up again right at the end, as we saw the culmination of Scrat's quest for his acorn that seems to have lasted 4 movies so far. Or perhaps it's a new acorn. Anyway, Scrat follows a treasure map (because it's a pirate movie) to the land of Scratlantis, where he is greeted by Patrick Stewart (whose voice is instantly recognisable). Stewart is playing Ariscratle, the leader of a society of talking squirrel-things who wear white tunics and live in Scratlantis, a gleaming white city of pillars and colonnades which contains loads of acorns. Unfortunately for Scrat, the Scratlantians do not actually eat or hoard the acorns. Ariscratle tries to explain to Scrat that the path of wisdom is to resist temptation (or, er, something like that - I wasn't taking notes and can't remember exactly!) but Scrat doesn't listen and in his excitable attempt to grab all the acorns in Scratlantis he pulls the giant acorn that is being used as a plug for the whole floating city and sinks the lot, creating the Southern US desert in the process.

I couldn't find a picture of Scratlantis, the film's too recent. Please enjoy this image of Scrat and his acorn instead!

There's actually an interesting inversion of the Platonic myth here, probably more by accident than design. Plato's story of Atlantis is about a society that, greedy for power, tried to conquer the world, and were punished for it. Here, the Scratlantians are a wise and restrained people who have managed to invent philosophy, clothing and Ionic columns during the prehistoric era but whose civilization is destroyed through one individual's greed. The lesson, ultimately, is the same - don't be greedy, and don't take what isn't yours.

Also the squirrel-thing-Atlantis is really funny.

My review of The Woman in Black on DVD is up at Den of Geek.