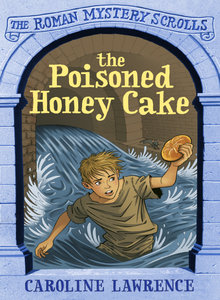 This is the second volume in the series The Roman Mystery Scrolls, a spin-off from The Roman Mysteries for younger readers. In this story our intrepid hero, ex-begger-boy Threptus, is nearly drowned, poisoned and starved, but always comes out of it walking, talking and hungry for Cleopatra soup.

(Cleopatra is a chicken).

These books are great fun and Threptus is a lively and likeable lead character. The narrative includes just the right amount of new words and educational information, but told in a simple and easy-to-read style, and with clear explanations for the more difficult words (there's also a full glossary at the back). The adventure is exciting but not too scary, the plot at once serious enough to really matter (Threptus and his master Floridius will starve if they don't get work) while at the same time being light enough to entertain younger children (Floridius is a soothsayer, so his line of work is entertaining and often funny). There's less toilet humour in this book than the last one, which I have to say I was totally OK with, but kids looking for something to go 'ew!' at will thoroughly enjoy Threptus' second visit to the sewers. There's also some lovely wordplay (the latrine slave reminds people of a thrush, so that's what he's called - the Latin for 'thrush' being turdus).

The approach to divination in this book is fascinating. I must confess, I've always thought that most ancient soothsayers were big old fakes. Maybe some of the dream interpreters believed themselves to be genuine, but for the most part, I tend skeptically to assume that any reasonably successful soothsayer had his methods, like a fortune-teller or a medium, and they weren't prophetic.

There's a great story in Livy about how a keeper of the sacred chickens once falsified a sacred-chicken-feeding report and said the omens were good for battle. When the men found out he'd lied, the general put the chicken-keeper in the front line as punishment for falsifying omens, where he was quickly killed, but went to battle anyway on the grounds that he, the general, had received a good omen, so it was all fine. This tells me several things about Roman divination. 1. You expected to get the right result, probably by starving the chickens, as food dropping from their mouths because they were eating so greedily was a good omen. 2. No general changed his battle plans on account of chickens BUT 3. The soldiers' morale might genuinely be affected by a bad omen. So someone believed in them - but it wasn't the chicken keeper or the general. Essentially, if you're the one producing or relying on the omens, you're less likely to actually believe in them.

Anyway, Threptus is as surprised as I am to discover that Floridius genuinely believes he has some kind of divinatory skill, even though he supplements it by having Threptus spy for him and by making some of his schtick up on the spot. Over the course of the story, most of Floridius' prophecies and related miraculous occurrences have logical, practical sources, usually involving Threptus. However, there are a couple of incidents that don't seem to have any practical solution and that appear to be genuinely divine signs, or at the least extraordinary coincidences. There's also a dream sequence which seems most likely to simply be the product of Threptus' sense of guilt, but which prompts him to ask his still-living dream visitor if it was something more than that in a letter at the end of the book. Perhaps this is, in fact, a more accurate representation of ancient divination than my cynical conviction that all ancient diviners were old frauds. It seems likely that, assuming some people somewhere believed in these things, the diviners themselves might hold on to some belief in the possibility of divine assistance or miraculous foreknowledge, even though they manipulated and controlled their everyday work. 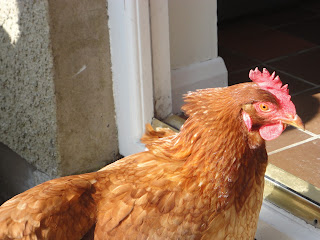 I read this almost in one sitting - it's a breath of fresh air, a short and sweet little story to cheer you up on a dull day (I've been reading George RR Martin lately - this was such a relief!). I'm very much looking forward to the day my pseudo-niece and pseudo-nephew are old enough for me to read it to them! I'll do all the voices and everything...

For more from Caroline Lawrence (who I am convinced must work 24/7 and never sleep), I've also reviewed The Case of the Good-Looking Corpse, the second in her new middle grade series The PK Pinkerton Mysteries over at Fantastic Reads.