The Sweet Scent of Blood (by Suzanne McLeod) 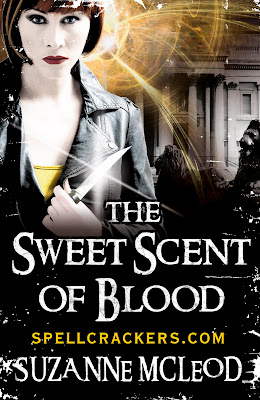 As you know, I have a bit of a weakness for dappy vampire fiction. So, while I was at the SFX Weekender last winter, my brother and one of the OldestFriends were kind enough to buy me a couple of volumes of Suzanne McLeod's Spellcrackers series.

The series is fun, though you have to be prepared to leave reality entirely behind. Many fantasy series choose to reveal their more magical elements slowly, so you can get used to the world and the characters before suspending your disbelief in a big way. Robin Hobb's Farseer / Liveship / Tawny Man series, for example, begins with animal telepathy and progresses through human telepathy and animated stone dragons before finally breaking out the big, living dragons. The first volume in George RR Martin's A Song of Ice and Fire has a zombie or two and three dragons at the end - I don't know how much fantasy will later come into the series as I'm still only halfway through Book 3, but the number of zombies, at least, is steadily increasing and there were some mammoths clearly inspired by Tolkien's oliphaunts in there as well. For the first two seasons of Buffy the Vampire Slayer, the Big Bad was a vampire - it was only in season 3 that the series became focused on a demon bad guy for more than an episode. And the first Sookie Stackhouse novel is about some vampires and one shifter - werewolves don't turn up until Book 3 and witches appear in Book 4.

The is not the approach McLeod has gone for. Within a few chapters, you've already encountered vampires, witches, fairies, a satyr and a troll. I think the troll was the point where I started to really go 'huh?' as for me, trolls belong on the Discworld, not in contemporary London. There's nothing inherently wrong with the Fantasy Kitchen Sink, but personally I prefer the many different elements to be introduced a bit more slowly.

Still, you will have noticed that there's a satyr in there. Satyrs in McLeod's mythology seem to be related to, though not the same as, fairies (going by the more authentic-sounding 'fae') which is an idea I rather like. Britain, Ireland and Gaul had legends about fairies, Greece had satyrs, there's a certain logic to the idea that the two are connected. The first person narrative tends to refer to him as a 'sex god' which isn't strictly accurate unless the protagonist's friend Finn is actually the god Pan in disguise, but I suppose it's close enough. Sex minor deity or sex spirit or sex creature don't have quite the same ring to them.

That brings me to the problem I have, though - the satyr is one of the (several) love interests. In fact, he seems to be filling the love-interest-that's-better-for-you role in a way, a bit like Sam Merlotte in the Sookie Stackhouse series, except there's some kind of problem involving vampire blood infection that I didn't really follow because to be honest, I was paying that much attention and there was an awful lot of mythology-forming information being thrown at me. Anyway, he's certainly the nicest of the love interests.

But - he's a satyr. He's got goat legs. Now, I'm not arguing with this as an interpretation of Greek mythology. Satyrs were associated with Dionysus and with satyr plays, which were light and comic, and associating them with sex is perfectly fair. No, my objection is practical. He's got goat legs. And a tail. And, you know, the whole lower half is that of a goat. Um, ew. This is why I don't get the mermaid thing either. When you add in the satyrs' similarity to Roman fauns, you get a love interest who's basically Mr Tumnus and the whole thing becomes even more disturbing on so many levels.

This is entirely different to werewolves by the way. Werewolves in this sort of romantic fiction are usually either wolf or man and when they're being romantic, they're, you know, man-shaped. Vampires are dead, which is thoroughly disturbing, but they're still human-shaped. Of course, there's plenty of ancient precedent for woman/not-human relations, from Zeus as an assortment of creatures to Pasiphae and the bull to Apuleius' woman/donkey mickey-take of the whole thing in the Golden Ass. And satyrs were forever chasing nymphs. But I don't care how much precedent there is for it, it's weird!

The book is quite fun, in a switch-your-brain-off kind of way. Charlaine Harris provided a cover quote which was generous of her given that the story is about a half-fairy heroine living in a world where vampires, who can mind-control people (I can't even remember McLeod's word for this, I just read it as 'glamour'), have come out and started running nightclubs and their blood has various pharmaceutical qualities (though more like an infection than a drug - there may have been an HIV metaphor going on there that I chose to ignore). I was attracted to the series because it opened in a cafe in Covent Garden, which is apparently where all the witches hang out. I love Covent Garden and I can totally imagine that, if there were witches and magic shops in London, that's where they'd be. So if you're into sappy paranormal romance with some murder and violence thrown in, you'll enjoy this - if not, I probably wouldn't start with this book.