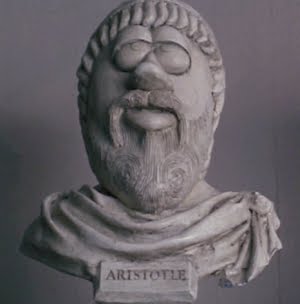 Philosophy - one of ancient Greece's greatest and most famous exports. Of course the trouble with philosophy, much like the trouble with its descendant academia, is that it is, essentially, a bunch of people sitting around in a room thinking. Occasionally they might talk to each other. It's not really the stuff cinematic thrills are made on.

That's not to say film and television are completely devoid of philosophers. I have some conceptual issues with Agora, but it's an excellent (and certainly dramatic) film about a fascinating ancient philosopher. Aristotle makes an appearance in Alexander. Marcus Aurelius, published Stoic philosopher, is a central figure in Gladiator and Fall of the Roman Empire. If we count natural historian Pliny the Elder as a philosopher, Simon Callow plays him wonderfully and tragically in The Roman Mysteries. And I've restricted this list to film and television - there are philosophers all over the place in novels, including at least one Gordianus book and Discworld novel Pyramids.

What I'm celebrating here, though, is a bit different. These are my favourite five comic cameos by ancient philosophers - Greek ones specifically. I've been fairly flexible in compiling the list - some are a bit more than cameos, some are funnier than others. But the point is, these are light-hearted references to the philosophers which are intended to have a bit of fun with a profession not always considered to be one of the liveliest.

5. Aristotle, The Muppet Christmas Carol
Really Aristotle? No - a Muppet-style bust of him.
Where is he? On a shelf on the wall of Headmaster Eagle Sam's office.
Does he actually do anything? Well, he's an inanimate bust, so no. The shelf falls down at a dramatically ironic moment, that's about it.
Will I understand Life, the Universe and Everything better for having seen this? For having seen Aristotle, no. The film will teach you to value love over money, that's always worth re-learning.
Why bother, then? Because this is simply one of the best films ever made. Certainly it's the best Christmas film ever made. And because the googly-eyed Muppet-style Aristotle head is hilarious.

4. Plato, A Matter of Life and Death
Really Plato? No, a statue of him, though the real Plato is discussed.
Where is he? Standing at the side of the Stairway to Heaven. Or, more accurately, the escalator to Heaven.
Does he actually do anything? Again, he's a statue, so no.
Will I understand Life, the Universe and Everything better for having seen this? Peter and Conductor 71 do discuss some brief bits of Platonic/Socratean philosophy. But they disagree with it, so probably best not to take it to heart.
Why bother, then? Because this film is even higher up the list of the Best Films Ever Made, one of Powell and Pressburger's extraordinary trilogy of Technicolor masterpieces from the 1940s (along with Black Narcissus and The Red Shoes). And because it's an intriguing question - if you needed a lawyer and had everyone who's ever lived and died on Earth to choose from, who would you choose? I agree with Peter - I wouldn't go for a Greek philosopher either. They didn't know the first thing about women.

3. Archimedes, Monty Python's Flying Circus, 'Philosopher's World Cup'
Really Archimedes? Yes, to all appearances - though the owl in The Sword and the Stone probably bears more resemblance to the actual philosopher.
Where is he? Munich Olympic Stadium, at the final of the International Philosophy World Cup. Germany vs Greece.
Does he actually do anything? Archimedes stands out from the crowd in this sketch because he's the only philosopher on either team who does manage to do something. Karl Marx for Germany comes close (my understanding of football is shaky but I think he's right - Socrates' goal was offside). But it's Archimedes who, with less than two minutes to go, shouts 'Eureka!' in celebration of his great idea - that maybe one of them should actually kick the ball.
Will I understand Life, the Universe and Everything better for having seen this? You will appreciate that in some circumstances, it's better not to over-think it and just to kick the ball. It's a decent enough life lesson.
Why bother, then? Accusing philosophers of being incapable of achieving anything practical is a cheap shot but what the heck, it works. And the little gold halos on St Augustine and St Thomas Aquinas are brilliant.

2. Pythagoras, Red Dwarf, 'Meltdown'
Really Pythagoras? No, an artificially intelligent wax replica.
Where is he? Er, some planet somewhere. About three million years away from Earth's solar system.
Does he actually do anything? To be fair to Pythagoras, he tries. He's convinced there's a solution, probably involving triangles.
Will I understand Life, the Universe and Everything better for having seen this? Not really, but you'll be reminded that Pythagoras was the name of some random formula involving triangles you learned at school.
Why bother, then? It falls apart a bit towards the end, but this is a great episode of Red Dwarf, playing with the initial concept to give us Caligula teaming up with Rasputin, Gandhi doing push-ups, Lister's version of the history of World War Two and Rimmer finally getting to fulfill his greatest dreams of military command, with predictably diasatrous results. Funniest of all is Lister's attempt to describe the indescribable to the Cat - the execution of Winnie the Pooh. 'That is something no one should ever have to see.'

1. Socrates, Bill and Ted's Excellent Adventure
Really Socrates? Yep. Fetched directly from ancient Greece via time travel. (And some regular travel, presumably).
Where is he? After an exciting journey through time and space, he is eventually able, through mime, to deliver his opinion on San Dimas, California, circa 1989. 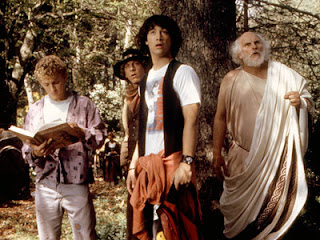 Does he actually do anything? Quite a lot - for Socrates, the main joy of the experience, and the reason he is so willing to be helpful to Bill and Ted, is that you sense he's doing more living in these two days than he has for a number of years.
Will I understand Life, the Universe and Everything better for having seen this? You'll come to realise that all we are is dust in the wind, dude. Heavy.
Why bother, then? Bill and Ted is one of those great '80s movies that were all about having fun, being a bit silly and building up to a rousing, feel-good ending. Plus, Keanu Reeves. Yum. They just don't make 'em like this any more.