Doctor Who: Dinosaurs on a Spaceship 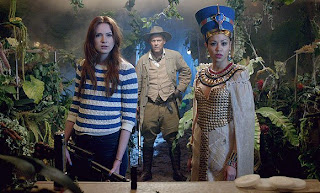 I have to confess, I'm still not quite getting Moffat-era Who. I liked most of his episodes back in the RTD era a lot (with the exception of 'Forest of the Dead') but somehow, I've just not been connecting with the show completely over the last few seasons. There've been individual episodes I've loved ('Vincent and the Doctor,' 'The Doctor's Wife,' maybe 'The Girl Who Waited'), I like Amy and Rory, I warmed to Matt Smith after seeing him in Christopher and his Kind, but it just isn't working for me on an emotional level. Ah well, nothing will appeal to everyone I guess. It's still a fun show.

With expectations thus lowered, 'Dinosaurs on a Spaceship' turned out to be rather better than I at first thought. All through the publicity and the first ten to fifteen minutes of the episode, it felt like Spitfires vs Daleks in Space (or, to show that RTD was just as bad, Daleks vs Cybermen) all over again - a daft idea that the writers have to find a way to squash together, not always convincingly, rather than organic story development. But actually, once we stopped jumping around doing pointless things like having an engine room that looks like a beach, this story held together rather better. There was a solid, plausible (even better, mythologically inspired) reason for there to be dinosaurs on a spaceship and the plot was, in the end, reasonably tight.

There was also, in the end, a genuine plot-based reason for having Queen Nefertiti on board as well. Aside from a bit of posturing about being Queen, she didn't really give any outward sign through language or behaviour of being from ancient Egypt (perhaps surprisingly, Charlaine Harris is still the author who's produced the most convincing period characters in an SFF situation I've read recently - her old vampires really feel like they come from a different era in a way that most vampires/time travellers/alien abductees don't). But she was a fun character and there was a point to her being a famous Egyptian queen, as it made her a prime target for an extremely creepy alien bounty hunter of the mean, slimy, slaver-type kind (not the action-y Bobba Fett variety). Throw in a big game hunter who earns his place shooting dinosaurs with tranquilizers and I felt happy that all the madness in this episode had a genuine purpose and was pulled together into an interesting story.

The mix of companions here was fun and reminded me how much I'd love to see an historical companion for a change, like the Second Doctor's Jaime (and I should add that I have no idea how the new companion is going to be introduced, only that it looks increasingly likely that she won't be from the contemporary UK, which I'm quite happy about). I just love the idea of a character with a different perspective and a different knowledge base, and maybe even slightly different values, travelling with the Doctor and reacting to the madness around them in fresh ways. I also like seeing a fuller TARDIS in general (I'm really going to miss both Rory and the balance of having a three-person TARDIS). Mark Williams as Rory's dad was fun too, much as I kept expecting him to say 'My name is Olaf Peterson, and I am very good in bed.'

I'm not sure how I feel about the odd nature of Amy and Rory's presence in these episodes though. It makes sense, logically, that the Doctor would pop back for them every now and again, and they are obviously building up to something with this storyline, given Amy and the Doctor's conversation, but still, there's something jarring about the way they have to be picked up and shoved into an episode and then dropped off again. The episode implies that the Doctor has a few 'occasional companions' hanging around that he does this too, which could be fun and introduce a lot more variety to the show, but is also a little bit disconcerting, since we're suddenly presented with random new faces who apparently have long histories with the Doctor (as in 'A Good Man Goes to War,' though it worked better in the context of that episode). I'm really looking forward to a bit more stability when the changeover happens at Christmas. 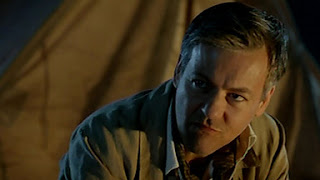 Overall, the ancient world specifically may have been a bit of window-dressing here but most of the mad elements earned their place, even if Rory's dad's part was a bit too convenient ('oh look, it's the first ever example of something that needs two family members to pilot it, and we just happen to have a father and son on board, isn't that lucky?!). It was really only that random beach that bothered me in the end...

All Doctor Who reviews