The West Wing: A Proportional Response 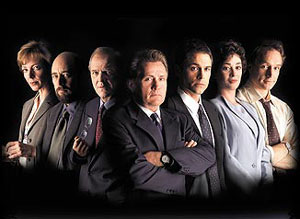 Previously on The West Wing - we were introduced to Morris, Bartlet's doctor, a man so obviously immediately doomed that he might as well have been wearing a red shirt. Safety tip, folks - if you are a character on a TV show, do not introduce yourself to your new boss by showing him pictures of your wife and newborn baby and then tell him you're flying out to a particularly dangerous part of the world.

In addition to some other storylines about Sam and the call girl and the introduction of Charlie (yay!) this episode is about Bartlet dealing with his first military operation, and working out what sort of Commander In Chief he's going to be. How he reacts to Morris' death will indicate (in theory) how he will approach foreign policy and military issues. His military advisors are suggesting he make 'a proportional response' to the attack that killed Morris. Since this episode was made in 1999, the story comes out broadly in favour of restraint in the interests of not being at war, but Bartlet, contrary to expectations based on his lack of military experience and liberal views, doesn't immediately come to that conclusion.

The propotional response, by the way, is code-named Pericles 1, after the famous Athenian general and political leader Pericles - presumably in the hope that Bartlet will decide he wants to emulate him. Since Pericles was something of an imperialist, this may indicate that his military advisors secretly want to conquer everywhere as well...

Bartlet himself angrily demands to know the value of a proportional response, goes right through eye-for-an-eye-style vengeance and comes out into let's-kill-them-all mania, from which he has to be talked down by Leo. (This is also the episode in which Bartlet's smoking habit is revealed. He always smokes when he's trying to be badass). As they argue over the issue, Bartlet declares that he's basing his attitude on the Romans, because in the Roman period, a Roman citizen could travel all over the world protected only by the words civis Romanus ('I am a Roman citizen'), because the Romans would come down so hard on anyone who hurt one of their citizens. It's worth quoting this in full:

Bartlet: Did you know that two thousand years ago a Roman citizen could walk across the face of the known world free of the fear of molestation? He could walk across the Earth unharmed, cloaked only in the protection of the words civis Romanus -- I am a Roman citizen. So great was the retribution of Rome, universally certain, should any harm befall even one of its citizens.

I have numerous problems with this particular argument. For one thing, whatever Bartlet says, this would only apply to the Roman Empire itself. No Pict or German or Parthian from outside the empire would hold off killing someone because they were a Roman citizen (it might even encourage them). So the analogy only works within the United States (which Morris wasn't) - unless Bartlet's suggesting they actually start conquering places.

For another thing, while I fully believe there is probably some ancient primary source somewhere that claims this was true, it's not remotely plausible in reality. The parable of the Good Samaritan - a fictional story, but parables work by reflecting real life as closely as possible to make them relateable - shows how dangerous some parts of the Roman Empire could be, and it doesn't seem remotely likely that, if the Jewish victim in that story had declared he was a Roman citizen, the bandits would have said 'Oh, sorry mate,' and refrained from beating him up and stealing all his stuff. Similarly being, presumably, a Roman citizen doesn't do the character Charite much good in Apuleius' novel Metamorphoses. There are stories of particularly successful bandits in historical sources as well (Cassius Dio 76.10, Herodian 1.10), like Maternus and Bulla Felix (a sort of Robin Hood-type character). The evidence for them isn't overly reliable, but they do seem to have existed, and I doubt very much telling them you were a Roman citizen would have done you any good.

It's certainly true that bandits like these were punished, and Roman punishments, as is well known, were particularly brutal. So perhaps, if you wanted to avoid being crucified, thrown to the lions, or executed in an exotic mythologically-inspired way in the arena, you would do better to avoid a life of crime. It's also true that your crime would be considered much worse, and your punishment would be more severe, if you had killed or injured a Roman citizen - how far the Romans would care if you hurt other people is hard to say, and if you killed a slave you would owe their master money. So to an extent, it's true to say that killing a Roman citizen was probably not a good idea and you might find yourself in hot water for doing so. The Romans certainly determinedly went after Bulla Felix and Maternus, though the fact they seem to have been running major operations verging on Spartacus-levels of rebellion might have had something to do with that. But to say that every single Roman citizen all over the Empire could wander around telling bandits they were Roman citizens and expecting to be left alone is clearly ridiculous. 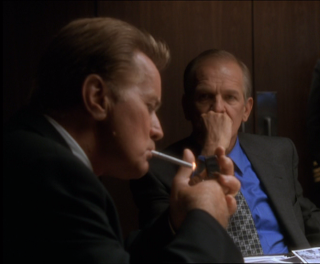 Where being a Roman citizen could help you more, of course, was in a more formal situation. St Paul was famously able to appeal to the Emperor because he was a Roman citizen - it gave you certain legal rights and you were probably more likely to get a decent trial if you were a citizen. But that's all it would do.


When Bartlet breaks out the fags, it's best to stay out of his way.

I don't know exactly where Bartlet got this idea from, though I'm sure it's in some source somewhere. But that's exactly what it is - an idea, an ideal. There's absolutely no way such a stance could ever be a practical reality, especially in a world without telecommunications and fast transport. But in a way, it's the perfect example to use in a show like The West Wing, which is all about ideas and ideals. The West Wing's relationship to reality is tenuous at best, but it holds up an ideal of what many people would like to think politics could be, so it seems only logical that The West Wing's President calls on a Roman ideal with little relationship to reality to make his point.