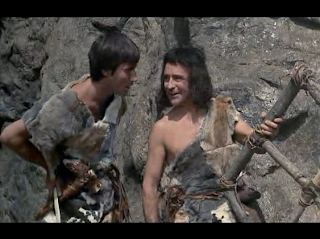 Roman Britain - a cold, miserable place that everyone hates, where it rains all the time. Julius Caesar popped in and decided it wasn't worth the effort, leaving Claudius to finally step in because where else can a limping, twitching, stuttering middle-aged emperor with no military experience go to gain a bit of credit? Boudicca revolted, Hadrian built a wall to keep out the Picts and the Ninth Legion supposedly disappeared, and as far as popular culture is concerned, nothing else happened for about 400 years. You're more likely to find Roman Britain represented in a story about King Arthur than a story about the Roman Empire, and a lot of the films and television series that do feature Roman Britain are quite frighteningly bad (Bonekickers, King Arthur, The Last Legion...) But it pops up occasionally in something halfway decent - these are five of the best.

5. Carry on Cleo
Historically accurate? Not even a little bit. The British live in caves and apparently co-exist with the dinosaurs, all during Julius Caesar's governorship of Gaul (immediately after which he returns to Rome as 'Emperor' - Caesar was never Emperor, though he did hold ultimate imperium, and he had to fight a civil war before he became Dictator). It's about as chronologically accurate as the Ice Age movies.
Any sign of Boudicca or the Ninth Legion? None whatsoever, as to be expected since the story pre-dates either of them. But then, there are dinosaurs in it...
Does it rain? There's some splashing while the Romans march, and Julius Caesar has a cold.
Worth dragging myself to the a*se-end of the Empire? Carry on Cleo is ridiculous, and the jokes are as broad as broad can be, but I still find it funny. And there's something pleasantly self-effacing about the ancient Britons (with whom we modern Britons tend to identify, even though we're unlikely to be related to them unless we're Welsh or Cornish) being so far behind the Romans in terms of technology and civilization, they're still living in caves as the Roman Republic reaches its end.

4. Chelmsford 123
Historically accurate? Variable according to the episode. The broad strokes tend to be about right, particularly basic signs of the impact of Rome on Britain like the straight roads, but poor Emperor Hadrian must be spinning in his mausoleum.
Any sign of Boudicca or the Ninth Legion? Not specifically, but there are some angry women in one episode who seemed to be inspired by Boudicca.
Does it rain? Frequently. Starting with this inspired clip.
Worth dragging myself to the a*se-end of the Empire for? Chelmsford 123 varied in quality, but when it was on form it was thoroughly chucklesome and even occasionally made jokes relevant to the study of the ancient world. The road that has to be bent so that it can go around the brothel in Romford particularly stands out.

3. The Silver Pigs (Falco series), by Lindsey Davis
Historically accurate? Yes - Titus comes off quite well, fitting his reputation as Emperor more than his reputation beforehand, and Domitian is a bit of an all-out villain but basically everything in there is plausible, including the representation of Roman Britain.
Any sign of Boudicca or the Ninth Legion? Falco was serving in the Roman army in Britain during Boudicca's revolt and is haunted by memories of it, especially when forced to return to Britannia.
Does it rain? It's been a while since I read it. I'm sure it does at some point.
Worth dragging myself to the a*se-end of the Empire for? This first Falco novel is one of my favourites - a little more serious, a little more gritty, and a classic they-don't-like-each-other-then-they-fall-in-love story for Falco and Helena. The gruelling description of the horrendous conditions in the silver mines serves as both an impressive representation of Roman Britain, and of the fate of many slaves across the Empire.

2. Caratacus' speech in I, Claudius, 'Old King Log'
Historically accurate? Roughly speaking - according to Tacitus, Caratacus really did give a speech in which he so impressed the senate that they let him retire peacefully in Rome. It was in front of the people rather than in the Senate, and how accurate Tacitus is presents another question all together, but the gist is there. Caratacus' look is based on Julius Caesar's description of the Britons, though they're gone easy on the blue body paint and done something a bit mad with the hair.
Any sign of Boudicca or the Ninth Legion? Thankfully no, too early.
Does it rain? Having seen Caligula hanging out in the rain in Germania, having Claudius thrown into a river, the good people behind I, Claudius clearly decided they'd had enough of both water and of trying to hide the fact they had no budget for exterior locations. We don't see Britain itself at all - so, no rain. 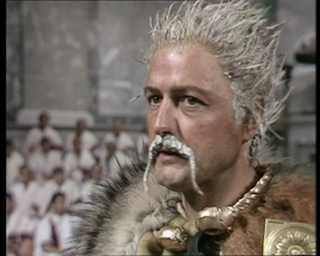 Worth dragging myself to the a*se-end of the Empire for? It would be worth many long journeys just to get the chance to admire that moustache. The whole scene is bonkers (what language is Caratacus speaking? Does he have perfect Latin?!) but brilliantly so.


The moustache is wonderful, but just who did his hair?!

1. The Eagle (dir. Kevin MacDonald, 2011)
Historically accurate? The Ninth Legion did not disappear in Scotland, they got moved out to Gaul and/or Germania. Otherwise most of it is not implausible, largely because we don't know all that much about Roman-period Scotland.
Any sign of Boudicca or the Ninth Legion? What's left of the Ninth are living in Scotland, doing their best to blend in. Until, thanks to Aquila, nearly all of them get finished off fighting over their old Eagle.
Does it rain? A bit, though local Kevin MacDonald is more interested in showing off the cold, clear beauty of Scotland, and England looks positively warm by comparison.
Worth dragging myself to the a*se-end of the Empire for? I really like The Eagle, much more than the similarly Ninth-Legion-in-Scotland-themed Centurion. The performances are great, the story is entertaining enough and MacDonald shoots Scotland beautifully. I especially love the documentary feel he brings to some of the scenes featuring the Seal People, and his use of American accents for the Romans.

Honourable mentions: Doctor Who's 'The Pandorica Opens' doesn't really depict Roman Britain in any detail, but I do like the reminder that Stonehenge was already old and inexplicable in the Roman period. It's been 20 years since I saw the BBC's Merlin and the Crystal Cave, but its use of Mithraic religion and Robert Powell as a Roman soldier stick in the mind - though I have a suspicion that section actually took place in Brittany, in France. Spiritual successor Merlin has an elderly character called Gaius who is presumably a Roman or Romano-Briton, but I haven't seen enough of the early series to know if that's significant  And, of course, the Wall between Westeros and the lands to the north in Game of Thrones/A Song of Ice and Fire is inspired by Hadrian's Wall, but isn't actually Hadrian's Wall. Westeros being much bigger than the UK, the rainy British weather seems to have been shoved out to the Fingers, with more dramatic, often snowy weather to the north and desert in the Westerosi equivalent of Cornwall.