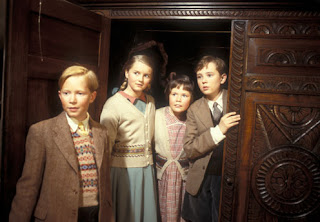 Christmas is coming, and that means - well, it means lots of things but in my house one of those things is re-watching the BBC television adaptations of CS Lewis' Chronicles of Narnia, which I and most of my friends who saw it as children absolutely adore.

These adaptations don't always have the best reputation these days. For one thing, some very rude things are said about the child actors, all of whom I thought were very good. Not perfect perhaps, but they're very young and probably working to a pretty tight TV schedule, I think they do a good job.

The more fantastical creatures are hand-drawn, which looks strange to anyone who's grown up on CGI. 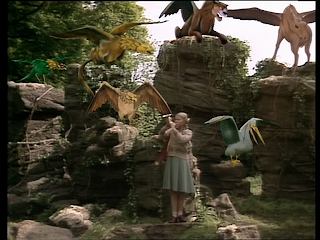 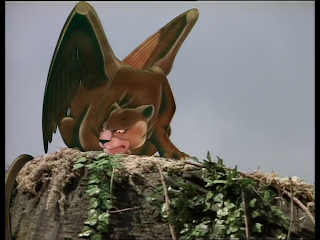 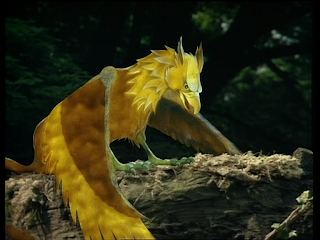 Susan's companions/Edmund's rescue party. Like the recent film, the makers decided that any real or mythological animal could be thrown in, so this group includes a hippogriff and a winged horse from Classical mythology and, for some reason, a winged panther and a pelican.

Personally I think it makes them look somehow more magical, and is an inventive solution to a budget problem, but it depends on your point of view. The Witch's performance is rather pantomime-y and makes a feast of the scenery, but as a child, that's what you respond to. It's adults who find more subtle performances scary - children are less attuned to the subtle manners of adults, and enjoy a properly dramatic villain.

Of course, I'm completely biased, because I fell in love with the series at the age of 5. Just hearing the beautiful theme music tells me that it's Christmas, and takes me right back to decorating the tree, waiting eagerly for my Brussels sprouts (I love them, always have), opening my presents from Father Christmas, watching Narnia with my family. I remember wondering for years exactly how the conversation between the White Witch and Edmund was filmed because we missed that bit after dropping a relative off at the airport (I had already caught up with the story through the book, which Dad was reading to me - we whizzed past the TV series about halfway through). I remember the year Father Christmas brought me Prince Caspian on video and I told my parents he must have got the wrong house because we didn't have a video player - at which point they told me to go downstairs (where Father Christmas had left a shiny new VCR which he firmly stated was for Mum and Dad, particularly when it came to playing with the remote control...).

For me and I suspect for lots of other people my age, this was my first exposure to anything Classical and shaped my interpretations of Classical mythology for years. I grew up thinking a Faun look like this: 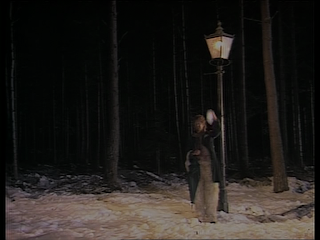 - roughly accurate, except for the coat and scarf (the name comes from 'Faunus,' hence Lewis' careful use of the capital 'F' for them). I though a satyr looked like this:

- which isn't too bad either, though the legs on both satyrs and Fauns look less like goat legs and more like very woolly trousers.  I thought Dryads and Naiads looked like this: 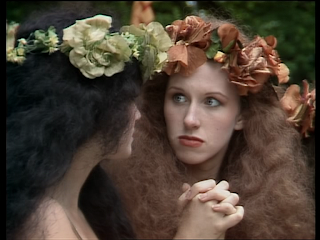 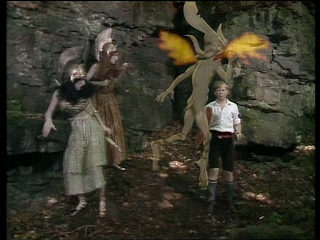 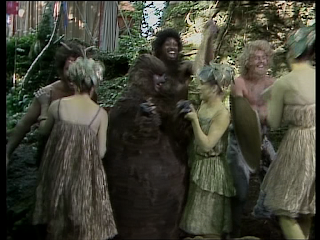 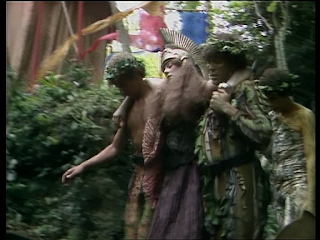 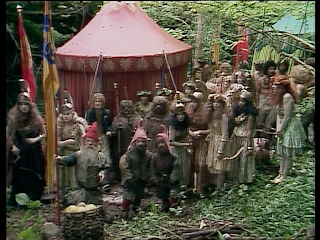 I have no idea what the men with laurel wreaths and skin-tight costumes are meant to be. Male dryads and naiads? I do like the Athena-style helmets the women wear though.

- which is probably fine, though the Greeks might have put them in less clothing. All of it pales in comparison with the fact that I grew up thinking a beaver looked like this: 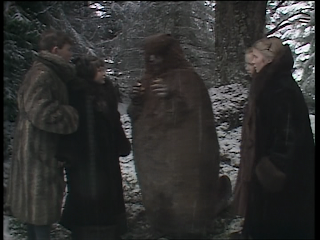 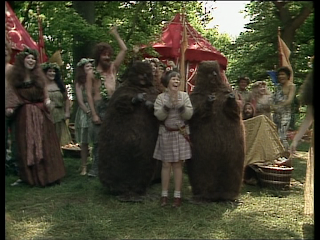 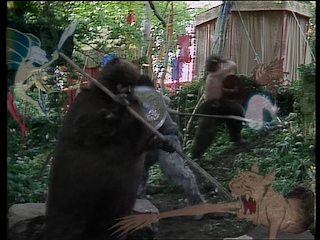 Seriously, it was years before I realised what beavers actually look like. 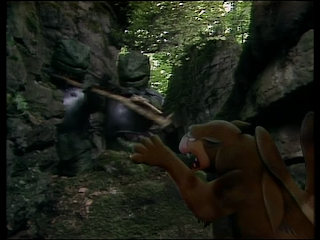 The series also included these little dinosaur-things. Hard to say why. 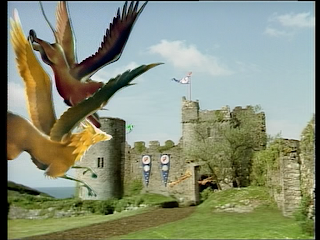 Hippogriff and winged cat approaching Cair Paravel. This is what Cair Paravel looks like - a medieval British castle. The 2005 movie got it totally wrong!

BBC adaptations tend to stick very closely to their source material, using mostly original dialogue from the book. In many ways, this is an advantage, and although the way the children speak in the book may sound strange to modern children, the period setting makes it entertainingly odd rather than being too confusing. At five years old, Classical references passed over my head, but most of them could be safely ignored. 'By Jove!' just sounds like a funny, old-fashioned expression so it doesn't cause a problem. Edmund's offer of 'Pax!' to Lucy is presumably more problematic for children who didn't grow up going to Catholic mass every week - I had an altar serving medal with a 'pax' sign on it, so I understood that bit. The programme makers even just about get away with the 'Daughter of Eve' stuff, since it confuses Lucy as well.

There is one line of dialogue, though, that always threw me as a child. When Lucy meets Mr Tumnus, she takes one look at him and asks 'Are you a Faun?' This always bothered me, because without Narnia I would have had no idea what a Faun was, and I never came across them in any other context. When Lewis was writing, presumably children with his level of education came across so much Classical material that they might have known what a Faun was,* but children in the late 1980s did not, and the more recent film adaptation more sensibly had Lucy just ask Mr Tumnus what he was. It's a small thing, but probably one of the occasions where taking a bit of a liberty with the text is a better idea that sticking pedantically to the exact required phrasing.

*(Actually, I suspect even Classics students, on being confronted by a man with goats' legs and horns, would ask if he was a satyr rather than a Faun, as they're rather better known. Satyrs don't necessarily have goats' legs, but sometimes do, whereas Fauns nearly always have the goats' legs, so Lucy is technically correct in thinking of Fauns first; but really, Fauns are pretty obscure. Unless you grew up obsessed with Narnia and take notice every time you see their name...) 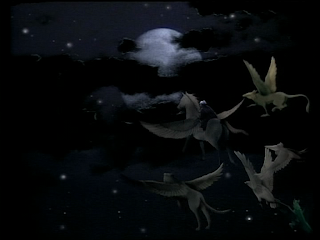 Narnia's setting is pseudo-medieval, so I didn't really associate these images with Classical mythology as a child - it was only later that I started to realise that they had a different origin to dwarfs and unicorns (and I was a teenager before the fact that the Stone Table is an altar suddenly struck me like a bolt from above). The complete blending of elements of different mythologies was apparently something Tolkien criticised about Narnia (which is a bit rich coming from someone who wrote a mythology for ancient England in which people ate potatoes) but it makes no difference to young children - at that age, you just accept what you're told. This means that The Chronicles of Narnia don't necessarily get children interested in Classical Mythology the way that Disney's Hercules might, but a childhood love of Narnia can make Classical myth seem that much richer if and when you finally get around to reading it.