Doctor Who: Silence in the Library/Forest of the Dead 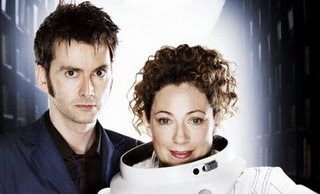 What is there left to say about River Song's debut? Well, for one thing, I liked it a lot better than I remembered. I remembered this two-parter as my least favourite of current showrunner Steven Moffat's Russell T Davis-era Doctor Who episodes (my favourites are his first, 'The Empty Child/The Doctor Dances,' and they go downhill from there. Yes, 'Blink' is a bit low down. I'm a rebel). And I still have problems with it, but I have to admit, when I re-watched it, I cried. And that's always a good sign. Spoilers follow. (Haha. See what I did there? I actually like spoilers though...)

Professor River Song is an archaeologist. One of my favourite things about this episode is that it offers a vision of future archaeology that feels real. Archaeology tends to be thought of as 'digging' but it doesn't have to be. Archaeology is the study of all the material culture of the past, including perfectly visible material culture like buildings. And so an archaeological expedition to a standing library, with the archaeologists wearing space suits in case there's no atmosphere or something, feels pleasantly like this really could be the future of archaeology. The team feel plausibly like archaeologists as well - their exact roles are undefined, but the money/landowner is there (Lux) with his assistant, and presumably the others include a pilot/technician for their spaceship and some more archaeologists. Even River herself behaves much more like a Professor and less like a super-soldier in this episode.

Of course, River's character changes quite a lot in later episodes, which tend to represent River as the gun-toting archaeologist of fantasy who never seems to do any actual work - indeed, for much of her time on Moffat-era Who, her primary identity is as a prisoner convicted of murder, not an archaeologist. 'Convicted murderer' is a very, very different character description than 'archaeologist' and River's character is correspondingly different: more violent, more aggressive, much less inclined to talk about history (not that she does that much here either, unless you count her personal history, which she talks about a lot). The River we meet here seems, frankly, a bit softer than the later incarnation that is actually a younger River. She does carry a gun, but only gets it out once and in extreme circumstances. She seems very shaken by Miss Evangelista's death despite all the horrors we now know she's seen (though that might be down to the super-horrible 'ghosting' that's going on at the time). She does mention that she's 'always lying' though, which certainly does fit the River we know and love. Perhaps 'Professor' Song has just mellowed in her old age. (And since she's part Time Lord, how old is she? Does she get centuries?).

That's about it for the blog-relevant content in this episode, though it's worth noting that Strackman Lux and his family are called 'Light' in Latin, as every Harry Potter fan knows. How very symbolic. Also, I think most Classicists, historians, archaeologists and other academics would be very happy with the idea of a library that covers an entire planet (though perhaps we could live without the continent of Jeffrey Archer books). Interestingly, the Doctor observes that no matter what technology came along as humanity developed, 'people never stopped loving books... you need the smell,' showing that like many of us, he likes the smell of proper paper books. And just recently, the Wall Street Journal has suggested that perhaps reports of the death of the print book have been exaggerated. Sure, e-books have their place and they're here to stay - but that doesn't necessarily mean that print books will disappear all together.

I have whole problems with the end of this two-parter that have nothing to do with Classics or archaeology. I get the impression that it's supposed to be a happy ending, with everyone living forever in this fantasy world. But I find the whole concept unbelievably creepy. Basically, they're all trapped in The Matrix forever? OK, a nice Matrix that they can bend to their will, but still. Anita told the Doctor that she'd like an old age, and that's exactly what none of them will get - they're frozen at the point they died and CAL's been a child for a century. Plus, I find the idea of spending eternity in a computer programme really unpleasant. Maybe if you're an atheist, and it's the computer or nothing, that seems like a good thing, but since I believe in an afterlife, the idea of my soul being trapped in a computer instead of going there (wherever there is) is chilling. I suppose it could be read the same way I've always understood Rimmer's hologram on Red Dwarf (the soul goes wherever it goes, the hologram is a separate entity - which makes his quest to be alive again rather pointless) but still. Creepy. 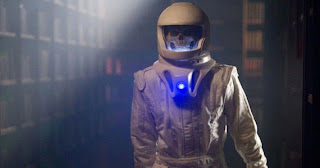 If you haven't seen the episode, I should probably mention that the Vashta Narada are also really creepy.

River's chronology really doesn't work now that we've seen more of it - why would she think Ten might have done the Crash of the Byzantium? Surely she must know the order of her husband's regenerations.

If the dust in sunbeams was a flesh-eating monster, I think we'd have noticed.

At one point, the Doctor and River appear actually to be using the sonic screwdrivers as screwdrivers. At other times, 'screwdriver' becomes a much dirtier-sounding euphemism than 'dancing' was.

At one point, River and the Doctor are both distressed at Donna's apparent death - presumably River's also thinking 'I guess the universe is pretty screwed now too.'

The whole Lee-stammering-and-missing-Donna thing is so spectacularly irritating and such manipulative story-telling that I pretend it didn't happen.

Is it worrying when you start recognising perfectly respectable actors as 'hey it's that guy from Strictly Come Dancing'?!

Miss Evangelista looking like the woman in black is rather cool. The effects when she takes off the veil, less so.

The Doctor and River are remarkably un-bothered about the fact they got Other Dave killed. This is why Nurse Redfern is my favourite.

It's handy that the guy who actually knew what was going on didn't get got by the Vashta Narada isn't it?

Doctor: Head's too full of stuff, I need a bigger head!

Miss Evangelista: My dad said I have the IQ of plankton - and I was pleased!

Doctor: She's a footprint on the beach, and the tide's coming in.

Doctor: I don't give my screwdriver to anyone.
River: I'm not anyone.

Donna: This isn't my real body? But I've been dieting!

Also, 'We're going to need a chicken leg' is almost as good as 'Get the cheese to sickbay!'