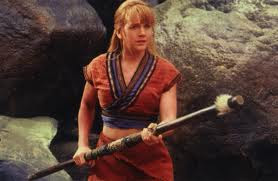 Gabrielle, suffering a crisis of confidence, rather abruptly abandons Xena to return home, only to discover that inevitably, her village has been attacked by a gang of generic, swarthy bad guys in her absence. The warrior hired to defend the village being about as sober as Denzel Washington's character in Flight (which was rather good by the way), Gabrielle and her sister are forced to take charge of the village's defences. Naturally, they succeed, Meleager the alcoholic warrior talks about his own crisis of confidence with Gabrielle and turns good in the end, and Gabrielle's sister encourages Gabrielle to go back to Xena and live the life of adventure again.

'Meleager' is an appropriate name for a character who admires Gabrielle as a female warrior. Mythologically, Meleager was the son of King Oeneus, one of a number of kings  lords and other characters who managed to annoy one of the gods, in this case bringing down the wrath of Artemis on himself by not bringing her enough offerings. Artemis sent the Calydonian Boar, a huge boar intended to destroy the countryside of Calydon, to punish him. Meleager led the hunt for the boar and eventually killed it, but dedicated the skin - the trophy from the hunt - to the female huntress and runner Atalanta, who in some versions had drawn first blood from the boar. Either way, Meleager being in love with her usually comes into it somewhere. Atalanta was a huntress rather than a warrior, and Xena's Meleager isn't in love with Gabrielle (so far as we can tell) but still, it's a nice choice of name, and appears to be a genuinely meaningful choice, which is more than can be said for some names on this show (the bad guy is called 'Damon,' which sounds neither ancient nor Greek to me, though I could be wrong, it could be a derivative of Damonides or something. But I don't think so).

As Gabrielle's sister Lila advises her to go back to Xena at the end of the episode, she says that Gabrielle's life will never be complete and she should live life, not let it pass her by. Gabrielle replies that she thought she was the only oracle in the family, and her sister says it doesn't take an oracle to realise the Gabrielle belongs with Xena. I can't decide whether this is an irritating misrepresentation of oracles or not (I suspect it is). Oracles answered questions or made predictions about the future. The could give advice in the sense that they could answer direct questions (e.g. 'Should I get married?') or they could predict things (e.g. 'If you go to war, you will destroy a great empire'). If Lila is predicting literally that Gabrielle will be 'incomplete' in some measurable way, that would be an oracle-like thing to say, or if Gabrielle asked her 'Should I go back to Xena?' and she said 'Yes,' that would be sort of like an oracle I suppose, but this sounds more like generic advice to me. An oracle is quite a specific thing, it's not a guidance counselor.

There are a few other Classical references scattered around - Gabrielle is (unconvincingly) playing pan pipes at the beginning, which was cheesy but sort of fun. She seems to be doing her best impression of the scary-cute fauns and satyrs from Fantasia: The Pastoral Symphony. Her home of Potidea on the other hand, aside from having completely different geography to the Greek version, looks like a medieval castle for some reason. 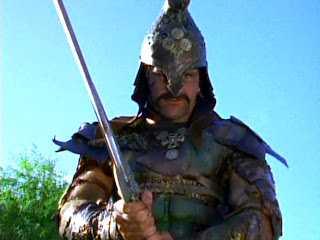 There's a nice idea behind this episode, in which Gabrielle doubts some of the choices she's made and goes home, and sees how much she's changed in her time away. Unfortunately the execution is a little bit too hurried, and Gabrielle's sudden panic during a confrontation with some random bandits at the beginning feels very forced. Freezing up and being disturbed by that is fair enough - one of Buffy's best episodes ('Fool for Love') was kicked off by a similar plot, albeit with more 'getting horribly stabbed,' less 'freezing up' - but Gabrielle seems to have rather an extreme reaction to it, given what's already happened to her while travelling with Xena. Come to think of it, it would have been more believable if Gabrielle had been stabbed or broken an arm or something. After that, the action in her village follows a series of predictable beats, with little real depth, though her conversation with Meleager about freezing up is a good moment, and it's nice to see her connect with her sister. In the end, though, the most touching bit of emotion was probably the sad little wave Xena gave Gabrielle as she walked away right at the beginning.

Gabrielle, stalling the bad guys: ...And as for what we want, I think it was Sophocles who once said - (here she's abruptly cut off).

Disclaimer: Meleager the Mighty, the generally Tipsy and Carousing Warrior-For-Hire, was not harmed during the production of this motion picture.