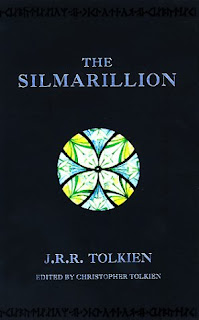 More Spartacus reviews are on their way, but I saw this today and was really intrigued. This is a fan-made trailer for a sadly non-existent film of Tolkien's tome of Middle Earth mythology, The Silmarillion. I have to confess, I'm a bad Tolkien fan - The Silmarillion is sitting on my shelf but I haven't read it. I have read Christopher Tolkien's edited version of some stories from it, published as The Children of Hurin with beautiful illustrations by Alan Lee. Based on what I've read from that novel, The Silmarillion would be a lot more like Game of Thrones than The Lord of the Rings, but I digress.

This 'trailer' is, of course, made up of clips of other films, edited together to look like one really kick-ass film without including too many story-specific elements. I spotted quite a bit of The Voyage of the Dawn Treader in there, which is sort of nice and weirdly appropriate given JRR Tolkien and CS Lewis' friendship (and ignoring the fact that Tolkien didn't like Narnia). I spotted bits and pieces of King Arthur and Robin Hood in there as well, I was delighted to see the sexy guy who went off with the mermaid from Pirates of the Caribbean 4 and I recognised Gemma Arterton's voice from Prince of Persia. The maker of the video has listed the films he or she used on You Tube, and some others I didn't recognise included Legend of the Seeker, The Time Machine, Diablo 3, WoW Wrath of the Witch King and WoW Cataclysm (I assume that stands for World of Warcraft?).

What really intrigued me, though, was the use of Clash of the Titans for much of the first part of the trailer. I guess this was largely because it provided the astrological imagery needed for the opening section about the universe, but it got me thinking. Because The Lord of the Rings is pseudo-early-medieval (the Rohirrim use words from Old English like theoden, prince, and eorl, warrior, while Tolkien's description of the faded glory of Gondor could be sort of Byzantine), I tend to imagine all Tolkien's mythology as taking place in a pseudo-early-medieval society (except, of course, the hobbits, who live in the early twentieth century. They're ahead of their time). But logically, of course, if Gondor is Byzantium and the Rohirrim are the Old English, then surely their immediate predecessors should be pseudo-Romans and their distant ancestors should be pseudo-ancient Greeks, Egyptians or Mesopotamians.

Tolkien fans, what do you think? If, by some miracle, the whole situation with the rights were to be sorted out and a movie made of The Silmarillion or The Children of Hurin, what sort of look should it have? Should it look pseudo-Greek, or pseudo-Roman? Egyptian or Mesopotamian? Or should it look pseudo-medieval, to match up with the currently existing films?

Lord of the Rings Mythology Sci-Fi and Fantasy