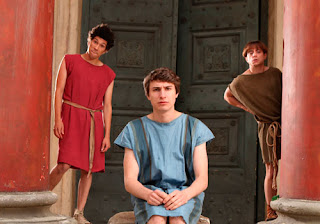 Here's the thing with Plebs - it's daft, cheap, predictable, unsophisticated, puerile and incorporates some jokes I'm really not sure about taste-wise - and I laughed out loud. Quite a lot.

Plebs is a new sitcom that premiered with a double bill on ITV2 in the UK last night (review of episode 2 coming soon). It follows the misadventures of Stylax, Marcus and their slave Grumio, and Marcus's attempts to romance their British new neighbour Cynthia, without her slave Metella getting in the way (the argument about how to pronounce 'Briton' made me laugh). It's this generation's Chelmsford 123, featuring actors from Twenty Twelve, The Inbetweeners Movie, Friday Night Dinner, Smack the Pony, Gavin and Stacey and so on.

The show is chock-full of inaccuracies, of course, but that's because it exists in the same sort of surreal netherworld as Tony Robinson's Maid Marian and her Merry Men, a fantastic children's show I grew up with in which medieval peasants sing about pancake day and the Sheriff of Nottingham's guards have a pet elastic band (in fairness, one guard did object that this was impossible because they hadn't been invented yet). So there's no point worrying about ancient Romans eating corn on the cob, because that's really not the point. It's not all inaccurate, anyway. The close relationship the main characters have with their slaves might have shocked some of the snobbier elite authors of the surviving Roman texts, but is actually pretty reasonable I suspect, especially for poorer citizens with only one slave, living in close quarters with each other.

Plebs is set in the year 27 BC, which is interesting. Unlike AD 123, which is a pretty random year that sounds kind of funny and is conveniently situated during the reign of Hadrian, he who built the wall, 27 BC is an incredibly significant year in Roman history. It's the year many scholars choose to mark the end of the Republic and the beginning of the Empire, because it's the year in which Octavian Caesar took the name Augustus and set in place the political systems by which he would govern the Roman world, giving himself lifelong powers at the same time. (Others would cut off the Republic at 31 BC, when Mark Antony and Cleopatra were defeated at the Battle of Actium, or 30 BC, when they died, but 27 BC is significant however you look at it). The writers insist that our heroes won't meet the emperor or anything of that nature (though they clearly haven't seen Up Pompeii!, which very rarely featured the emperor either except in the movie, and they imply that the emperor at the time was Nero, which obviously it wasn't) but surely they can't have happened upon quite possibly the most significant year in Roman political history by accident. Whether they do anything with that fact remains to be seen.

(It's also a bit early for Britons - Julius Caesar had invaded and gone away again, but Britannia wasn't yet a Roman province. But that's by-the-by).

At least one of the writers has clearly been to a school that taught Latin, because the boys' slave Grumio is named after the cook from the Cambridge Latin Course - Metella is a name from that course as well, where it was the mother's name (which does rather fit Metella's slightly naggy, slightly protective character). Cynthia, meanwhile, is named for Propertius' probably-fictitious lover from his love elegies, and I wondered if Flavia was named for the heroine of The Roman Mysteries (though she's a very different character). I love the use of job descriptions as names as well which is very Roman - mostly coming from Flavia (who calls the boys Copier and Shredder, along with their Roman water-cooler Water Boy or, as he insists, Water-Man) but also in reference to The Landlord (useful for story-telling as well as a fairly Roman thing to do). 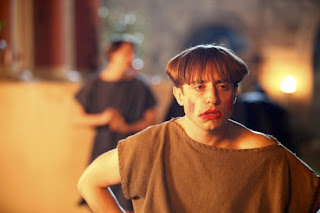 And that's the real strength of the show - it's funny. Perhaps this is an indictment of my terrible sense of humour, but as much as I was prepared to hate Plebs, I laughed. In fact, I laughed far more at a single episode of Plebs that at half a dozen episodes of Malcolm in the Middle (which I have been watching on DVD for the first time). Ultimately, that's all I really ask of a sitcom - so I'll be watching the rest of the series with pleasure, no matter how daft it gets.