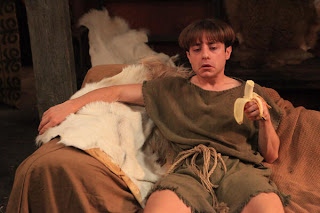 In this episode, the boys's flat is overrun with Thracian fruit sellers, and Marcus falls foul of a group of veterans of the Roman army.

The essential basis of this episode is the constantly expanding nature of the Roman world. The details are all over the place (neither Thrace nor Britain had yet been conquered in 27 BC, though there were links with them, and I'm pretty sure bananas don't grow in Thrace, which is on the Black Sea, unless the climate was warmer back then). But the essential point is, our characters live at the hub of a world that is constantly changing thanks to the power plays of the higher-ups.

In Cynthia's case, this means accidentally donating money for the conquest of her own country. Cynthia and Metella come from outside the Empire, which is one reason for Cynthia's occasional confusion at Roman customs (like gladiatorial combat). Here, Cynthia is uncomfortably reminded that however well she might be trying to blend in she's not, in fact, Roman and is on some level still an outsider.

In the Thracians' case, we see the impact of conquest on people's lives, as they introduce the Romans to a previously unknown fruit, the banana. Bananas are Britain's favourite exciting and interesting fruit - they only grow far to the south so to a British audience they seem very exotic, there are jokes to be made when people discover the skin for the first time, and of course, as Plebs is keen to point out, they are... suggestively shaped.

We also see the boys react with extreme discomfort to the Thracians kissing them on the cheeks in greeting. The specifics of this reaction are, of course, transposed from modern Britain - this is the average British reaction when greeted this way by people from other parts of Europe (squirming and not knowing where to look, essentially. We tend to prefer a handshake in a business context, and a barely comprehensible grunt approximating to 'a'righ?' with a nod of the head when greeting friends). But the story as a whole is nice reflection on a world in which freshly conquered new people with new customs, new products and, historically, new religions pour in and shake things up every now and again.

I enjoyed this episode, particularly the terrible puns ('Thracist,' 'bananed'). Again, this is probably a reflection of my terrible sense of humour more than anything else, but I laughed every time someone said 'bananae.' I'm easily pleased.