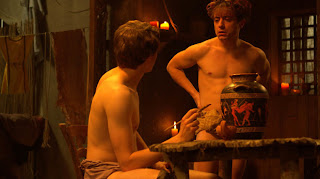 It's Grumio's birthday, and Stylax has bought him the titular (hehe) vase, which happens to include a picture that looks like Cynthia. I liked the vase - there are lots of vases like that from the ancient world (though possibly not detailed enough to look like a specific person). I liked the way everyone kept calling it 'vintage' too, as it would most likely be a very old Greek vase, judging by the style.

I also liked the detail that Grumio doesn't know how old he is, which is played for laughs but reflects what must have been a pretty common reality. Marcus has forgotten to get Grumio a present, so he offers to swap roles for a day - this is also something some Romans really did, as part of the Saturnalia. It would be up to the master whether to participate or not (and some, like Pliny the Younger, refused to swap roles but did go away to the country and leave the city slaves to have a holiday) but it was definitely a real thing, so that was fun too.

Much of this episode was concerned with Stylax's relationship with his cousin, and I was very happy to see incest depicted  as something thoroughly disapproved of by almost everyone else (even between cousins, which is more often considered OK in some cultures). One of my biggest pet peeves about popular culture interpretations of Rome is the notion that Romans were prone to having sex with siblings, parents, aunts and uncles all over. The truth is, historical writers accused certain emperors - the ones they didn't like - of having sex with their sisters, mothers and so on in order to show up how bad they were. (And Claudius did marry his niece, but he had to get special permission to do that). Historians also routinely accused bad emperors of being effeminate, thinking they were gods and being fond of money and luxury. Basically, all bad emperors were accused of being Cleopatra, which is probably where the whole notion came from in the first place (well, and Caligula might genuinely have been a bit off his rocker - it's debatable).

All of this means it's really refreshing to see a large number of Romans reacting with appropriate horror to the idea of incest - this time, Plebs actually reflects Roman reality more than popular culture tropes. The reference to how 'the royal family do it all the time' is a bit problematic because of the date - 'the royal family' would have to mean either Egyptian or Hellenistic monarchs, who were all gone by 27 BC (Cleopatra having killed herself three years earlier) or the Julio-Claudian emperors, in which case it would certainly be true as far as cousins and step-siblings go, but too early (Augustus is still only about 35). I do wonder if giving the series such a precise date was a good idea - I suppose it doesn't matter much since hardly anyone will notice, but if you do know the history, it does take you out of the comedy when you're distracted for several seconds thinking 'hang on, that doesn't work.' If the series was simply set in 'the Roman Empire' none of this would be a problem (nor would the fact Cynthia and Metella's home of Britain isn't a province yet, though there were trade links) - I rather hope something is made of the date to justify it at some point. 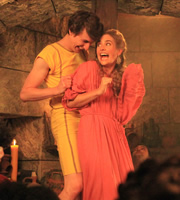 A bit slower than some earlier episodes, but Marcus walking around in a yellow dress was very funny, and talking of Cleopatra, Flavia bathing in asses' milk was a nice touch. Marcus clearly hadn't thought through his offer to buy Grumio a pointy hat, since a cone-shaped hat is the symbol of a freedman, but then I imagined it as the Roman equivalent of giving Dobby a sock, so that was quite funny too. And now we know how all those Greek pots ended up getting smashed...