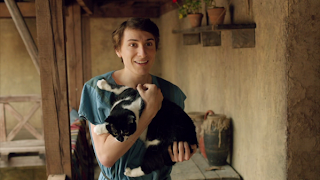 In the fourth episode of Plebs, Stylax has caught something nasty, and Grumio's lottery ticket may or may not be inside Cynthia's dead cat.

This is probably the least 'Roman' episode of Plebs so far. I probably don't need to say this, but Romans didn't have sexual health clinics, especially not staffed by attractive, single young women (women were midwives, men were physicians), and I'm not aware that they had lotteries either, though I suppose they might have done. What this means is that, more than any other episode so far, this is essentially a modern sitcom in which the protagonists wear tunics.

There was one concession to the setting of ancient Rome - I liked the way the show acknowledged the fact that everything Grumio has, including himself, belongs to Marcus. This was carried right through to the landlord negotiating how to split potential lottery wins from Grumio's ticket with Marcus, rather than Grumio. Slaves were often given an allowance and a close personal slave like Grumio might have possessions, but technically, legally, they all belonged to his master. The references to this situation, as well as giving Marcus a reason to be invested in digging up Cynthia's ex-cat, are a nice reminder that however much people will always be people, ancient Rome was in some ways a fairly alien world.

I'm a cat person, so violence to cats usually upsets me, but luckily the dead-cat moments were kept to a minimum. The cat ('Felix', Latin for good luck, which works rather nicely) is also by far the fattest, healthiest-looking stray cat I've ever seen, which I suppose is a good thing, since I'm glad the animals used seem healthy and happy, though anyone who's been on holiday to Rome knows that this isn't what the cats that prowl the streets of Rome look like. The pets of love interests in Roman-set stories are more often sparrows, to match Catullus' famous poem about how upset his lover Lesbia is because her pet sparrow has died (that's why Miriam's secret admirer gives her a sparrow in The Secrets of Vesuvius). But then, it would be harder for a sparrow to potentially choke on a lottery ticket.

Not as many laughs as the first two episodes, but less weeing and pooing than the third episode, so a step in the right direction!