Doctor Who: Nightmare in Silver 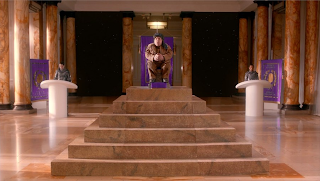 I've spent two days trying to work out if there was enough Roman Stuff in this episode to write a blog post about it. There were plenty of bits of Roman decoration in 'Nightmare in Silver's set-up - the Doctor et al emerge into a part of the galaxy ruled by a human Empire with the Doctor's psychic paper claiming he's a 'pro-consul,' the statue of the Emperor found early in the episode depicts him with laurel leaves on his head, the Emperor's spaceship is all marble and columns and bits of Imperial purple. But the story didn't really make that much of the Roman connection.

The position of the Emperor was important, of course. The loneliness of command, the difficult decisions faced by a single ruler and so on were major themes of the episode and Warwick Davis' early sympathy with the person who has to push the button to destroy part of the universe is beautifully played (and, coincidentally, reminiscent of the choice faced by the Doctor in 'The Fires of Pompeii'). But really, his character could equally have been called 'King' or 'Tsar' - in fact, 'King' might have been better. Porridge seems like a reluctant Emperor, which implies he comes from an hereditary dynasty. Roman Emperors were sort of hereditary, sometimes, especially in the early Julio-Claudian period (though even then not a single Emperor was succeeded by their biological son, always adopted sons) but mostly the position went to whoever fought hardest/murdered the most people. This is not a criticism - there's nothing wrong with using existing names and concepts in a fairly basic way to flesh out an SFF world, and vaguely Roman names and concepts makes a whole lot more sense than the random clerical labels Moffat took to using back in 2010 (whose only saving grace was Iain Glenn's fabulous Father Octavian, and even then it would have been cooler to just have him be a pseudo-Roman called Octavian).

What the Roman theme does do which is quite interesting is present the Empire in a positive light. Throughout the history of film, it has been common to depict Empire as evil, an over-bearing hotbed of depravity ruled by a succession of Caligulas. Porridge's good, noble Emperor-in-disguise has much more in common with pseudo-medieval fantasy kings or princes or princesses who like to dress as commoners and run around incognito waiting for brave young stable-boys/peasant girls (delete according to gender and sexual preference) to show them what they're made of. Following the positive references to Rome in Oblivion, the Romanist in me is very pleased, and hopeful that more and more productions will open up representations of Rome (ancient or science-fictionalised) to explore different corners of what being Roman means, beyond 'evil' and 'depraved.' 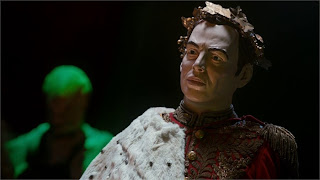 I was also interested to note that the waxwork from which Angie recognises Porridge shows the Emperor wearing a laurel wreath (along with a more Victorian-looking coat and a fur lining that looked like Blackadder's cat-fur thing). In Roman statues, Emperors are very rarely shown wearing laurel wreaths - though they do wear them on coins (thank you to Penny Goodman for that bit of info). What do you mean, that's not interesting?! OK fine, here's something else - a lot of Roman statues were known for being very 'warts 'n' all,' but there were also phases during which statues, particularly of emperors, would be more idealised, and I did like the idea that everyone was distracted from recognising Porridge because the artist had made him taller.

I hope we see Emperor Porridge again, and not just because I can blog about it - that character, and Warwick Davis' performance, were the saving grace of what was otherwise a bit of a 'meh' episode. I've been a fan of Davis ever since he played Reepicheep (one of my favourite Narnia characters) way back in the BBC Prince Caspian/The Voyage of the Dawn Treader and Porridge is played with a fabulous mixture of humour and pathos (almost enough to save the episode from the negative impact of the two children, whose characters were both intensely irritating, and both badly acted. I feel mean for saying that, but it was really off-putting). My reaction to this episode largely fits how I feel about the series overall - I'm honestly not sure how I feel about season 7 of Nu Who. I've been enjoying it, especially since Easter, and I like Clara, but I find the way she runs off with the Doctor every Wednesday and comes home a bit strange - I miss the days when companions got on board the TARDIS and were trapped, Sliders-style, trying to get home for years and years...