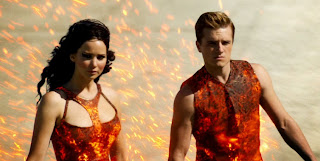 Catching Fire is my favourite of the Hunger Games books, so I was really looking forward to this film, and I wasn't disappointed. It's very well made, Francis Lawrence staying just close enough to the style Gary Ross used on the first film that it feels like recognizably the same world, while also making it his own. This is also one of those films that isn't an adaptation so much as it is the book, transposed as literally as possible onto the screen. (I don't mean there are no differences at all, obviously there are, and there are websites that will list them for you. Plus the movie isn't told entirely from Katniss' point of view. But seriously, just about all the significant content from the book was in there, and there were no major changes.) Since I love the book, I was OK with that, though it'll be interesting to see if the film-makers take the same approach to the less well-received third book (to be split into two movies), Mockingjay.

Overall, there wasn't a lot of overtly Classical content in this installment. The arena's still an arena, obviously, and the show is still supposed to be a fight to the death. Finnick uses his trident, both as a weapon and to catch fish, preserving that link with the ancient retiarius (a gladiator who fought with a trident and net). Plutarch is still called Plutarch (one of my favourite ancient authors, a philosopher and biographer). But the Cornucopia looks even less like a cornucopia than last time and besides the names (Plutarch, Brutus and Enobaria - 'Brutus' again being used to imply brute force rather than king-killing, as Brutus has nothing to do with the conspiracy and actually acts against them), the Classical influences are generally left to sit in the background rather than being foregrounded.

There was one exception. The scene in which the tributes are presented to the crowd in the Capitol in horse-drawn chariots has an obviously pseudo-Roman look to it by its nature, the chariots being small ancient-style war chariots. In the first movie, the parade seemed to take place in some kind of enormous hall, but in this film, it definitely takes place in the open air. This makes the scene more reminiscent of scenes of Triumphs in Roman epic films, especially since, as opposed to the cold greys of the first film and of a lot of this film, this scene is lit to look like everyone is bathed in warm sunshine, making it look even more like a movie version of a Roman Triumph or a dramatic entrance in the style of a Triumph (like Cleopatra. The exception is Gladiator, which colours ancient Rome in a blueish tone to make it resemble black and white film of a Nazi rally).

Really, though, the biggest reference to the Classical world comes in the song at the end. Coldplay's Atlas explicitly compares Katniss to Atlas, the mythological figure who carries (or holds up) the world on his shoulders. It's a lovely, if obvious, metaphor for the situation poor Katniss has inadvertently ended up in - and Atlas wasn't overly keen either. 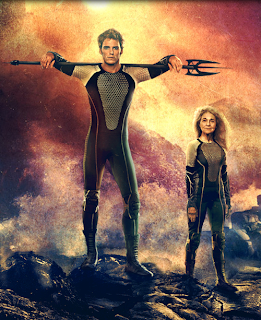 I loved this film - as a brilliantly acted, beautifully shot and extraordinarily faithful (to the point of being really long) adaptation of a book I love, I was pretty well pre-disposed to like it. There's so much plot that I don't think non-book fans will be bored, although - and I speak from personal experience here - it might be best to avoid buying large Coke to take in with you. Jennifer Lawrence is fantastic as ever in what must have been an exhausting role as Katniss spends most of the movie in various states of high emotion - it's a testament to her acting and Francis Lawrence's direction that we aren't tired of seeing her play similar emotions over and over again by the end. Elizabeth Banks is also particularly good, giving Effie fantastic shading and preventing her from being shallow, despite first appearances, and she, Jennifer Lawrence and Josh Hutcherson all do very well at playing people who aren't great at acting (if you see what I mean). My inner teenage girl still has an issue with the fact I found Peeta more attractive in the book but Gale more attractive in the film, but that's beside the point - catch this if you can, it's a great watch.